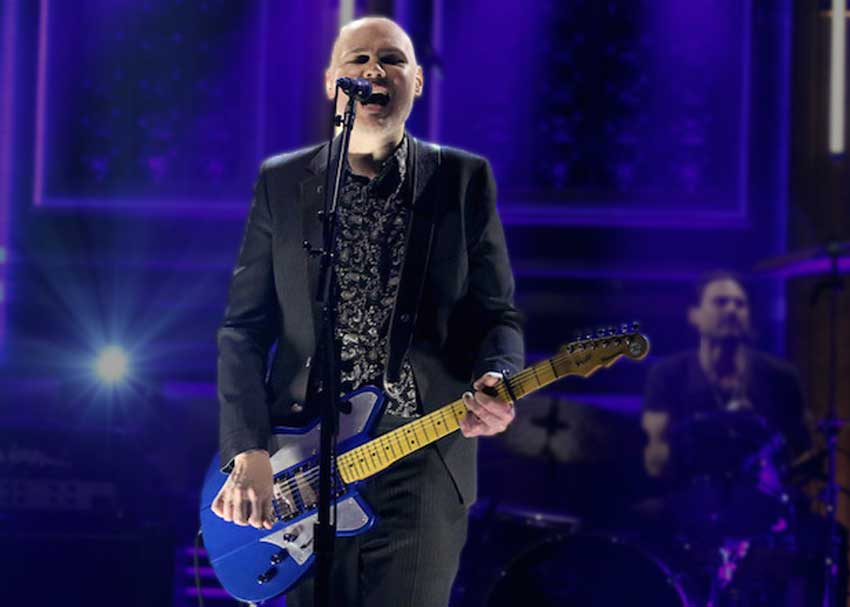 To celebrate the introduction of Billy Corgan’s new signature Reverend BC-1 guitar, we wanted to take a few moments to highlight some of his and the Smashing Pumpkins’ best tones. Take a look at our top 5 and join the discussion below by letting us know what songs feature your favorite Billy Corgan tones!

One of my favorite early Pumpkins tunes, “Drown” was never actually featured on a full length album of theirs, instead being released in 1992 as part of the soundtrack for the film Singles. With its intense dynamic changes, screaming guitar solos, blissed-out clean guitar interludes, and a psychedelic/noise rock/free jam outro, this song almost seems like a sonic mission statement from the band — bits and pieces of this song can be heard throughout the Smashing Pumpkins’ catalog. More focused than the work on their previous album, Gish, “Drown” sounds like a band finding their voice and effectively getting it down onto tape before the thought disappears.

Starting on a softer dynamic, the first few minutes of “Drown” is almost sublime in its simplicity — just a simple groove and a slightly distorted electric guitar. At around 1:20, we are introduced to one of the Pumpkins’ favorite toys, the humble E-Bow. Sounding like a pair of bees doing a little dance around one another, the dueling guitars ebb and flow with playful harmony. When the song kicks in for the first time and Billy starts ripping the solo at 2:33, you can hear those preamp tubes being pushed to their limits, with some magical harmonics that seem to just get squeezed out at the right times. After another quiet verse sprinkled with some thick phaser effects and big, aggressive chorus, the song makes a departure into a different sonic landscape, full of howling feedbacking guitars that are delayed on top of one another to make a satisfying cacophony of sounds.

“Soma,” one of the strongest tracks off of the Smashing Pumpkins’ second album, Siamese Dream, can really catch you off guard if you aren’t paying attention. Despite its diminutive introduction, this song has one of the most blistering and intense guitar solos found on any Pumpkins record. “Soma” starts off alarmingly restrained, with a handful of clean guitars playing a delayed, slightly modulated arpeggio while a soft lead is lightly picked over the top, as if it’s delicately treading water.

Even though half of the song is relatively quiet, one of the song’s most appealing traits is how it still builds momentum dynamically, but in just very small intervals of volume. For example, after the last “quiet” chorus, the song gets a tease of what sounds like 10 guitars, with distortion, melting like butter into one another while still lacking a “loud” dynamic — it still sounds soft! Obviously this is a tip of the hat to the engineering and mixing, but that the band has all of these levels of loudness that they can masterfully control really puts this song into that “next level,” whatever that may be. After “Soma” finally gets loud at around 3:30, all the quiet that preceded that moment really makes this part jump out of the speakers, and yet the crescendo of the song still isn’t over. Howling and hissing with pent up anger, the song’s guitar solo makes me imagine Billy wail away on his guitar in front of a 4×12 cabinet or two while the volume is completely dimed on the amp. Bursting out of the song like fireworks, the solo effectively signals the climax of the song, as well as the height of its dynamic range. After a final chorus, the once-mighty song shrinks back down to its former self, circling back to quiet, soft, and vulnerable once again.

This song goes out to all the other phaser lovers out there, as the gentle opening introduces us to a pair of guitars, one laying down a delicate arpeggio while the other swirls and encompasses the listener with a nice warm phase. After the song picks up, a huge, yet subdued, wall of distorted electric guitars sounds comes into the spotlight. Even though they sound like they are just being blasted out of a cranked amp, it sounds more like the sonic equivalent of angst in check — they are loud and on the verge of doing something big, but they are still pretty mellow within the context of the song. This is also the quintessential distorted tone on the album — mid-rangey, fuzzy, and what I would describe as a “bubbly” overdriven tone.

At the choruses, the guitars create this really gnarly feedback when they are muted. I remember hearing that the guitar used had extremely microphonic pickups, and when it wasn’t being played, it would just make a squealing noise. I’m sure that this guitar combined with screaming amps made for a ton of fun, but probably more headaches. Overall, the effect is compelling and gives “Mayonaise” its signature sound. After a short acoustic break, the distorted guitars come back with that same restrained fury we previously heard, before the song eventually returns to the quiet intro part until the end, almost as if it’s a bookend.

As one of their more straightforward songs, “Muzzle” really made its impression on me as what I would consider a guide to incredibly smooth overdriven tone. The song starts as just a few chords played on a slightly dirty amp, but explodes once the rest of the band comes in with this mean, mid-heavy distorted tone. I love the big, open chords that Billy and Co. play, as it lends this “hairy-ness” on top of the ringing treble strings that sounds just oh-so-right. I would love to have been in the live room while this song was tracking. I’m sure those cranked amps would’ve shaved a few years off my hearing, but listening to how these guitars actually sounded out of those amps and cabs would’ve made it all worth it.

There are a few leads here and there, but they aren’t ever the star of the song, but rather more like a snake weaving his way through tall grass. They more or less sit right under the gigantic rhythm guitars in the mix, essentially allowing the rhythm guitars and vocal to steal the show. I guess I really dig the subtlety and smooth playing of the leads, as they more about serving the song, as a blistering solo might not have worked in this song. As we can hear, however, the melodic leads actually found on the song add momentum and spirit to the song that sets in motion a powerful crescendo that ultimately climaxes at the very end of the song, bringing everything altogether for a brilliant finish.

Not only one of my favorite tracks off of Mellon Collie and the Infinite Sadness, “Thru the Eyes of Ruby” is probably my favorite Pumpkins track from their entire catalog. With legends floating around that upwards of 70 guitar tracks were used in just this one song, “Ruby” also introduced me to my lifelong love of stacking distorted electric guitars in the studio. Essentially foreshadowing the entire song, the pretty-sounding opening piano part is marred by what sounds like mechanical noises in the instrument itself, as if the melody can never be entirely pretty just because the piano isn’t working properly. Like that opening piano lick, “Ruby” is an expertly crafted song, but probably due to the decision to go overboard on modulation during the verses, as well as the insane amounts of distortion on the multi-tracked guitars, this song will never be “pretty” in a classical sense. But I like this aspect of the song, and it really makes me want to enjoy it even more.

After the piano intro, a distorted arpeggio sets the song in motion before a 500-foot wall of distorted guitars comes and crashes the party. As mentioned earlier, these guitars sound so huge because of all the double and triple-tracking (and probably more) of the rhythm guitars. Gone are the sounds of an individual pick against the strings of the guitars, and in its place is just this grind-y, amorphous cloud of a chord progression that floats its way from one chord to the next. The verses have a lot of movement to them due to the arpeggios and liberal use phasers and what sounds like flangers. The cool and mellow mood created during these quiet parts really juxtaposes the bigness of the choruses. After a few more choruses, the song changes drastically at around 4:35 to more of a driving rhythm that signals the beginning of the end for the song. In classic Pumpkins fashion, the song devolves into a quiet jam session, with a nice E-Bow lead lingering in the background as the song fades to a mellow acoustic guitar strum. To me, this coda symbolizes a sort of return to reality after the roller coaster of emotion that was the rest of the song — almost like staying up late enough to watch the sunrise after a long night out.