The Smashing Pumpkins – Mellon Collie and the Infinite Sadness 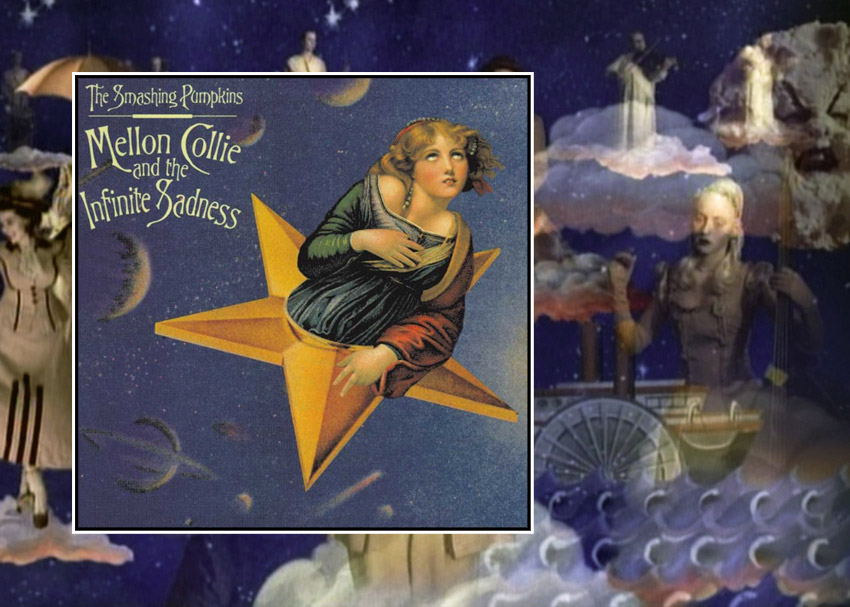 I remember the excitement that I felt after hearing “Bullet With Butterfly Wings” for the first time while in middle school. This unbelievable music video beamed onto the glass tube of my TV and I had never heard or seen anything else like it. My first thought was that I just had to get the album, the Smashing Pumpkins’ ludicrously named Mellon Collie and the Infinite Sadness. But after I actually got to hear the whole thing, the album’s title no longer seemed funny to me. In fact, I began to think it was perfect. To this 12-year-old’s ears, the music that was jam-packed into these two CDs just instantly sounded… important. I don’t exactly know why any of this music, with its angst and dark themes of innocence lost, appealed to me — I was a pretty happy kid — but regardless of all that, I was hooked. I can honestly confess that it was at this point when I realized that rock and roll had sank its addictive fangs in me and wasn’t ever going to let go.

Yeah, I knew of Siamese Dream before Mellon Collie came out, but I think I was just a little too young when it was released for it to really grasp me. But Mellon Collie…geez, that album hit me like a brick. I don’t think I’ll ever be able to forget hearing those gigantic guitars exploding like dynamite out of the choruses, preceded by some of the lushest, quietest verses I had ever heard on record up until that point. The loud/quiet dynamic of this sort of magnitude was a totally new thing to me at the time, and I couldn’t get enough of it. I soon learned that my first taste of this album, “Bullet With Butterfly Wings,” was only the tip of the iceberg. Deeper cuts like “Porcelina of the Vast Oceans” and “Thru the Eyes of Ruby” perfected that dynamic and combined them with epic chord progressions for maximum effect. The loud/quiet thing wasn’t the only dynamic trend found on the album. Sprinkled throughout Mellon Collie, softer songs like “Thirty-Three” and “Stumbleine” ebbed and flowed in their own dream-like way. If you wanted completely balls-to-the-wall sonic onslaughts, songs like “Jellybelly” and “Tales of a Scorched Earth” could be found just a few tracks away.

As I get older, even through all the music “phases” I have gone through, Mellon Collie has stuck out as a constant for me. When I was in high school and began getting into punk rock, I still had it to listen to. After getting into indie rock; after rediscovering mid-20th century pop/rock music, Mellon Collie was there. I’ll be the first to admit that I wasn’t the biggest fan of every song on the album when it first came out, but as my musical tastes have matured, and as my own life experiences have played out through the years, the songs continue to develop in my mind, piquing my interests in different ways I couldn’t have even imagined back then. October 24, 2015 marks the 20th anniversary of the release of Mellon Collie and the Infinite Sadness and after all this time, it has stuck out in my life as one of my favorite albums of all time, maintaining the importance it held for me way back when. I can hardly believe that it has been 20 years since my friends and I were gushing about the album at lunch time in my middle school’s cafeteria. I just have to say, I’m just as stoked about this incredible album today as I was then, and I’m happy to gush over it with you, 20 years later.