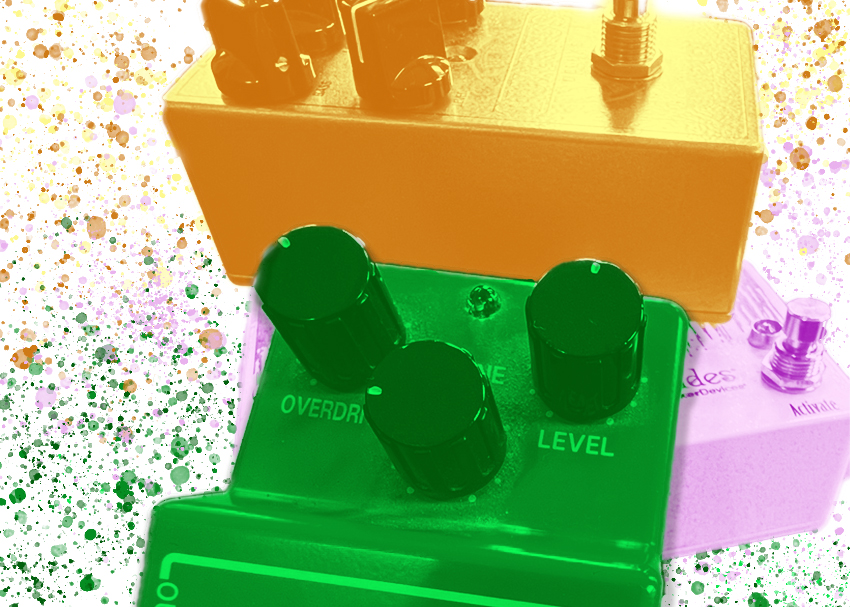 As guitarists, there are few things we love more than a good overdrive pedal. If you’ve been playing for years, there is a good chance you have several lying around. While you may have chosen a few of your favorites to stay on the pedalboard, you may want to try stacking overdrives together.

Stacking overdrives can help you achieve a more dynamic sound, or find a new use for an old pedal that was lying around.

In today’s post, I will be trying a few different combinations of the overdrives on my pedalboard: The EarthQuaker Devices Palisades and the Wampler Tumnus Deluxe.

A lot of players like to use their overdrive as their core “clean” tone. An overdrive can be a great way to push your amp into breakup territory, and to add some character to your sound. I got the Wampler Tumnus Deluxe to do just that. With onboard EQ, I am able to better shape my sound and push the front end of my amp a little more.

In the first sample below, I’m playing straight into my Fender Princeton Reverb without any pedals. In the second sample, I have the Tumnus set to a lower gain with a little bit of EQ to shape the tone.

There are a lot of players who like to set their “clean” tone a little hotter, and then use their guitar’s volume control and playing dynamics to control the amount of gain. In the example below, I’m using the Tumnus set to a higher gain level. Starting with the volume of my guitar about halfway, I’m able to get a nice clean sound. Then, about halfway through, I roll the volume back up to 10, and dig in more to get a dirtier sound. This can be a great way to maintain control over your gain right on the instrument itself, instead of switching pedals on and off.

There is already a lot you can do with one overdrive pedal, but the possibilities are endless once you start stacking them. Since I have been using the Tumnus Deluxe as my core clean tone, I will engage the Palisades when I need more gain.

There’s always a lot of debate over the “proper” order when stacking pedals, but like with most things in music, there’s no right answer. You just have to use your ears and go with what sounds best. While I personally prefer running the Palisades (higher gain) into the Tumnus (Lower gain), I’ve tried it both ways so you can decide which sounds best to you.

In this next example, I am running the Palisades into the Tumnus. This is how I’ve personally preferred to run these two pedals together. I’m also using the volume knob to progressively get more gain throughout. This really shows how much more dynamic range and tonal variety you have using both overdrives together.

I’ve also added the Walrus Audio Slo into the mix for some reverb.

Related: Overdrive from an Amplifier or a Pedal?

Guitarists often use pedals to mimic the sound of an overdriven amp, so why not go straight to the source and push your amp for organic overdrive? Pat explores the question in this post | Read »

Overdrive With a Dirty Amp

While the last examples were all running into my Fender Princeton Reverb at a lower volume, many players like to use overdrive with an already dirty amp. This can be an easy way to push a tube amp on the edge of breakup into a fully overdriven sound.

Another common technique many metal players have used is running a Tube Screamer into a high-gain amp. This can be great for pushing the mids a little more for a solo, and tightening up the low end. While I currently don’t own a high-gain amp, I tried this technique by running my TS808 Tube Screamer straight into my interface, using the Diezel VH4 amp simulator from Universal Audio.

This first sample is on a rhythm guitar part. The first two times through the chord progression, I am going straight into the “amp”, and the last two times with the Ibanez Tube Screamer engaged. It really helps to tighten up the boomy lows and push the mids, getting your guitar to cut through the mix.

For this final example, I am playing a lead line straight into the “amp” and then a second time with the Tube Screamer. This helps the line cut through the mix, while also adding a little extra sustain.

That’s all I’ve got for today, but we would love to hear from you. Leave a comment and let us know what YOUR favorite overdrives are, and how you use them.