Overdrive from an Amplifier or a Pedal? 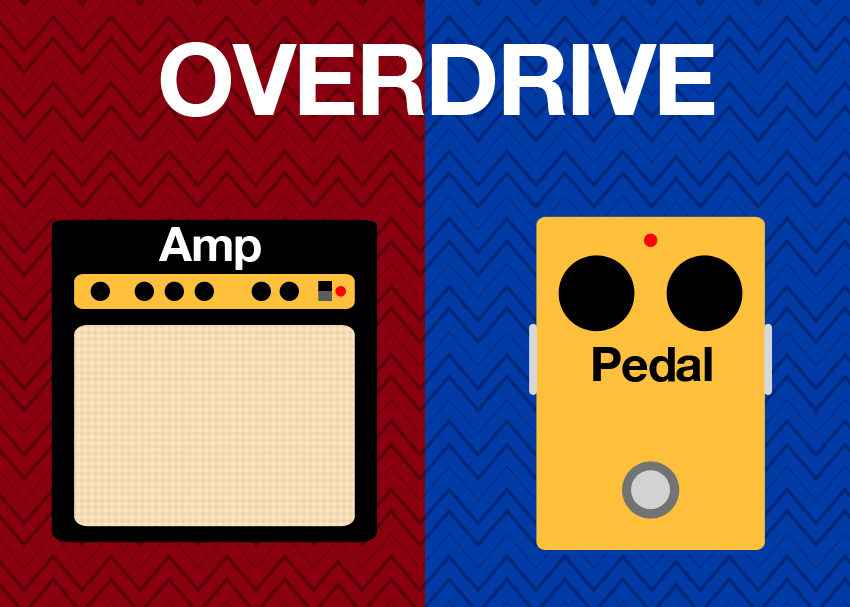 Getting overdrive primarily from an amplifier versus overdrive from a pedal has always been an interesting subject to me. Why is it that people get so obsessed with finding the best overdrive pedal or combination of pedals just to mimic what an amplifier sounds like when it’s being overdriven? Sure, The Beatles would also plug straight into a Neve console, Jimi Hendrix used a Fuzz Face, and Clapton sometimes used a Rangemaster, but when you think of rhythm tone from the late 1960s all the way into the 1970s, that’s almost always coming from a guitar plugged straight into an amp. We’re going to dive in to what the real differences are with some thoughts on EQ and and how an amplifier reacts to the overdrive pedal.

For this experiment, I used the bridge pickup on my trusty 2013 Gibson Les Paul 60s Tribute with Burstbuckers, a J. Rockett Archer, a 1965 Fender Princeton Reverb Reissue, a Fender Tweed Deluxe 5E3 clone, and a Shure SM57 right in the middle of the speaker about an inch off the grille. The amp was putting out around 115 decibels, which I feel like is plenty of stage volume for a medium-sized stage.

Princeton Reverb with and without the Archer The first clip is just the Princeton set to 8. This is the classic Fender blackface tone that people talk about when you crank a Princeton Reverb in the studio. I feel like the amplifier responds the best when there’s no overdrive pedal on and you get that massive low-end thump. The second clip is with the Princeton Reverb set to 4 with the pedal on. Once the Archer is on, you can cut through the mix more with the help from a middle frequency kick and there’s a little more sustain. This is certainly the more practical way of going between a clean and dirty tone instead of just blowing up the amp and using the guitar’s volume knob to clean up. I prefer the touch and bloom you get out of just getting the tube saturation that you crave at deafening volumes, but the pedal certainly sounds great and it is more practical.

Tweed Deluxe with and without the Archer

The Tweed Deluxe is a much different amp than the Princeton Reverb, so I was most excited to hear the differences with this combination. Tweed amps in general have more of a mid presence than the Blackface amps that came later, so I knew it was going to be really mid-heavy with the pedal on. If you’ve never used a tweed amp, the volume is only clean from 0 up until 4 out of 12, so anything more than four is the same loudness, but just more compressed and overdriven. I had the amp set at 10 without the pedal engaged. This is the absolute reason these amps are so coveted. It blooms even more than the Princeton Reverb, and it has that mid kick that cuts through a mix, but still sounds natural. With the pedal on, a ton of low frequency is just cut out just like what happened with the Princeton Reverb. The Best of Both Worlds

The last two clips are of each of the amps at the edge of breakup, so that’s 6 on the Princeton Reverb and 8 on Tweed Deluxe. This is a great blend of both of the schools of practice since you do get more of a cut and more sustain. I wanted to include this since this is generally how I used my pedals with my amps. To me, this sounds the best. If you set your amps at the edge of breakup and you just need a kick and little bit of a bump in the mids, I’d recommend the J. Rockett Archer, or you just get a tweed amp and set to stun. It’s up to you.

So, what did we learn here? The EQ section of the pedal in relation to the EQ of the amp you’re using is what it’s all about. That’s exactly why people have used Ibanez Tube Screamers with Blackface Fender amps. They have such a kick in the mids that it sucks up that low end you get from one of those amps and you cut through a mix. This is the exact reason why I love small box Fender amps. You can get that tube saturation at a level of volume that isn’t going to drown everyone out. The most important factor is does it work for you? Do you bounce between clean tones and dirty tones throughout a set or do you just need a solo boost? Do whatever when you’re recording, but keep in mind that the guitar tone you might remember sounding massive only sound that way because nothing else is occupying it’s space in a mix. Now, go turn your amps all the way up and let me know how you feel.