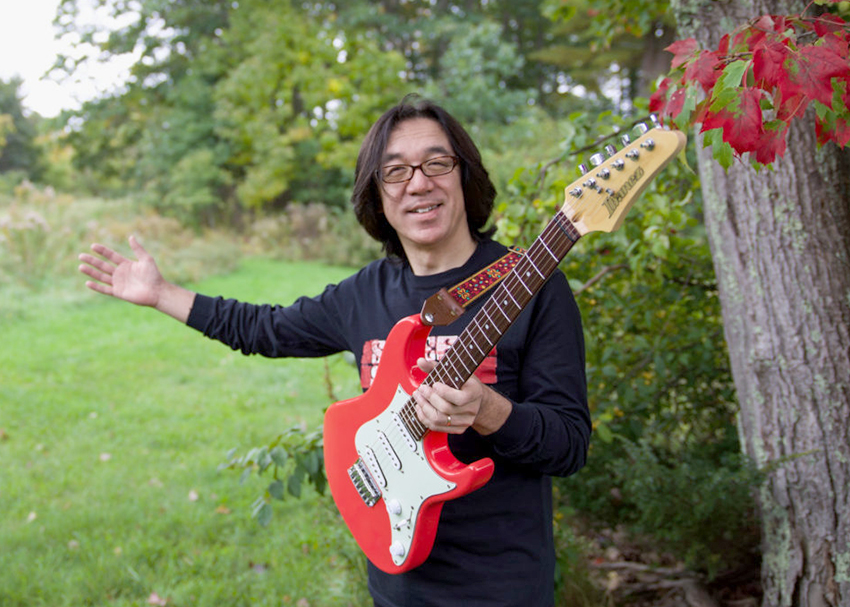 Don’t compare! Don’t worry! Don’t expect too fast! Be kind to yourself!

Apart from the licks, funky rhythms, and musical theory students learn from Tomo Fujita, these four tenets, recited in most of his videos and emblazoned on his custom picks, are what tend to stick in the mind.

On both his free YouTube videos and paid Guitar Wisdom online course, Fujita exudes a calm, casual, friendly energy, all backed by supreme knowledge of the instrument. It’s the kind of humble nature only true masters can maintain, and one rare among the competitive YouTube instructor crowd. Fujita loves teaching guitar to students who want to learn. He wants them to enjoy the process, not stress, and always remember to appreciate music along the way.

It’s all the more surprising then, to learn that in his early teaching years, Fujita’s students considered him a “hard ass.” More on that in a bit, but first, some background:

Watching Fujita teach intricate strumming patterns and his rapid triplet flourishes, (as seen in the video above) it’s clear that funk somehow got into this man’s DNA. Fujita traces this back to an Earth Wind, and Fire concert in Japan around 1975. At the time, he had no idea who the band was.

“If you hear two hours of that music when you’re 12, that impact lives in you a long time you know? So that’s why I play funky,” he said.

In time, the young guitarist would discover other jazz and fusion guitar luminaries of the time, like John Scofield and Mike Stern, as well as Japanese instrumental guitarist Masayoshi Takanaka. It was session wizard Larry Carlton who made him realize he needed to branch out and learn styles like R&B, blues, and jazz to become a better-rounded guitarist. Fujita also credits B.B. King for inspiring him to play with fewer effects and more feeling.

In 1986, Fujita emigrated from Japan to Boston, bringing nothing but a single suitcase and a small English vocabulary. The next year, he enrolled in the prestigious Berklee College of Music to pursue his life’s passion of guitar. There, he was able to hone his craft and meld his various influences into his own style. Outside the classroom, Fujita put his studies into practice, performing at New England clubs, even gigging during strenuous midterm weeks.

Fujita graduated from Berklee in 1991, and in 1993 joined on as an instructor there after after being asked by Larry Baione, then-chair of the guitar department. Fujita’s earliest Berklee students saw their teacher a little differently than his current students do: he wanted to push them, almost as hard as he pushed himself.

“Then I started to understand, sometimes you can push people too much because you love something,” he said. “You know what i mean? Everybody has a different pace, so that’s that’s how I learned. Now I learn more from students; I have to really understand each person’s personality more than what they want to learn.”

Fuijita would go on to refine his teaching style at Berklee, where still teaches today. But even during his “hard ass” period, Fujita got results from his students. Case in point: John Mayer, his student in 1997.

“I pushed him so much, sometimes you know, it almost looked like…he wasn’t crying but he really felt not great because I told him the truth,” Fuijta recalled. “You know, but [later on] he kept sending me guitars and I was always thanking him. Then he always said ‘you taught me so much’. So that really meant a lot to me.”

“I think he really made something change from blues music and pop music. He really did a great job to bring other generations of guitar players [to the blues],” he added of Mayer.

Some of Fujita’s other notable students include Eric Krasno of Soulive and Adam “Shmeeans” Smirnoff of funk group Lettuce.

In 2019, Fujita took his curriculum beyond the walls of Berklee with Guitar Wisdom, his online video training course. He says subscriptions have gone up significantly in the last two years, no doubt due to people staying home and having more time to practice guitar.

“The reason I made [Guitar Wisdom] is just because Berklee is not cheap. I don’t teach Skype lessons anymore but when I used to teach Skype lessons my hourly rate was not cheap,” he explained. “Some people don’t have enough money to do that so I wanted to give back to everybody what I learned.”

For $9.99 a month, subscribers have access to all of Fujita’s lessons, the majority of which are not available on YouTube. These videos run the gamut from beginner lessons, to theory, to sight-reading, to playing technique, to guitar maintenance, to specialized courses exploring a number of genres.

One thing Guitar Wisdom students won’t get much of from the classes is tablature. Fujita believes that tablature, commonly referred to as tabs, is less about teaching and more about showing.

“Showing quickly gives you satisfaction, but it’s not really helping you,” he said.

Fujita prefers to teach by showing finger position and explaining how that relates to scale degrees. This way, students can apply what they’ve learned to different keys and positions, rather than getting stuck in a rut.

During the 2020 NAMM Show, Fujita was making the rounds, chatting with his friends at the Ibanez booth. They wanted to know: why was he so fond of the Fender DuoSonic? The “student model,” Fujita explained, was built with a shorter 22.5″ scale to accommodate younger guitarists with smaller hands who may have had a difficult time playing on 12-gauge strings — considered “light” in the 1950s.

Around the same time, Fujita had a realization — he had been teaching Guitar Wisdom courses using guitars priced well outside the reach of an average student. He should be teaching on student-level instruments!

Thus began the shopping spree. Fujita spent “thousands of dollars buying cheap guitars,” by his own estimates, later donating or selling them to his students at deep discounts. He tried each guitar out, set them up, cleaned them if they were secondhand, and examined them. Through the process, he learned a lot about where corners were cut, how those impacted the playing experience, and how these guitars could better serve beginners.

“Thirty years ago, intonation was bad because the truss rods were really bad and they didn’t have good enough machines,” Fujita explained. “Now they have better machines so they can make guitars with good intonation, but the bridge construction and saddles, they make them the same way they’ve made them for many years from cheap factories. They never thought about details, so the bridge saddle screws are always too loose.”

Loose saddles change position over time, which can have a big effect on the guitar’s intonation and feel, leading players (especially beginners) to develop bad habits, Fujita explained.

Related: How to Intonate Your Guitar

Keeping your guitar intonated keeps notes in tune throughout the length of the neck, with the pleasant side effect of making your guitar more enjoyable to play. Learn how to adjust intonation in this post! Read »

Meanwhile, Fujita’s talks with Ibanez took shape: he had been hired as a brand ambassador and was soon asked to help design a series of guitars tailored specifically for new guitarists. Inspired by the popular AZ series, this new AZ Essentials series brought traditionally inspired body shapes with easy playing necks to a new market: first-time guitarists. Fujita’s teaching experience and time playing those $300 guitars was about to pay off — part of his work involved flying to Japan to guide Ibanez luthiers in making these new guitars.

Fujita’s first request to the Ibanez team: the guitars should have top-tier bridges that hold their position, even during string changes. They also should be hard-tail bridges (no tremolo) for simplicity and improved tuning stability. The original pickups, modeled after Fujita’s own, should be properly height-adjusted from the factory.

“People do pickup height by measuring or believing this is right; they don’t really use their ears and really work on what really sounds good or bad. So I taught them how to listen when it’s a good sound with the right height,” Fujita said.

While Ibanez is known for their fast-playing necks with flat fretboard radii, Fujita thought it best for the guitars to feature a more rounded fretboard profile to better accommodate learning the instrument. This choice is matched on the AZ Essentials headstock, which has six-in-line, split-shaft tuners, which the player can drop the string directly into with no pointy bits sticking out.

“This way, your cat is safe,” he said, showing the tuning pegs.

But that’s not to say the AZ Essentials are all for study and no fun. A dyna-MIX8 mini switch combines either the neck and middle or bridge and middle pickups into one humbucker sound, lending the guitarist even more tonal stability. And just like their higher-end AZ siblings, these guitars feature the super-comfortable AZ neck and All-Access neck joint for easy playability on the highest frets — perfect for hitting those first solos.

The Wisdom of Guitars

From the Berklee classroom to online instruction, and now infused into the AZ Essentials line, Fujita’s wisdom and knowledge of the guitar forms a solid foundation for the beginner and has plenty to teach advanced guitarists. And if you watch enough of his videos, you may even hear the words “Don’t compare! Don’t worry! Don’t expect too fast! Be kind to yourself!” pop into your head at times when there’s no guitar around.

“Guitar is just such an amazing instrument…you can discover yourself through the instrument,” Fujita said. “In other words, I’m learning guitar, but it seems like I use guitar to learn about life.”