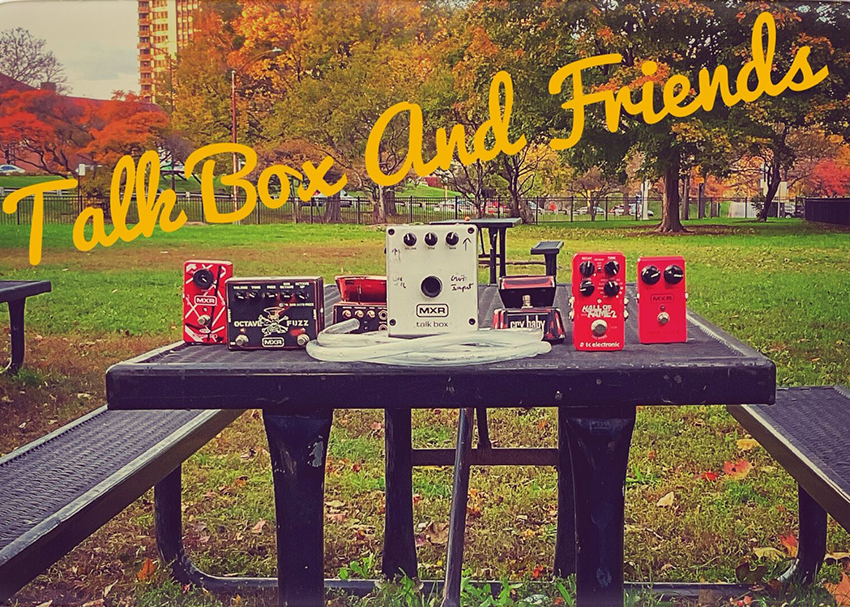 When guitarists don’t want to sing, they buy a talk box — at least that’s what I do. An instrument in itself, the talk box was unleashed onto the world in the 1930s and became popularized in the 1970s. Mostly seen as a novelty, it can also be a major sound piece as a handful of artists have shown throughout history. But what if we thought outside the (talk) box, and looked at using it in non-traditional ways? In this post, we will explore some creative ways to pair the talk box with other FX pedals.

Where Did the Talk Box Come From?

The talk box was created in the 1930s, but was not popularized in guitar music until the ’70s. Initially, it was used as a novelty by some artists in a handful of their songs.

Joe Walsh, “Rocky Mountain Way” – The guitar solo that starts at 3:10 is a great representation of an iconic solo used with the this pedal.

Pink Floyd, “Pigs” – In “Pigs”, the talk box is used in the background almost in the same way that a saxophone is used to flavor a wall of sound with bright, cutting tones.

Peter Frampton, “Do You Feel Like We Do” – While a number of artists brought the talk box to the guitar world, Peter Frampton’s use of this pedal was what actually brought it to the forefront. He became synonymous with the pedal itself by making it a main part of his sound. This iconic solo (starting at 5:50) shows why Peter Frampton is the talk box man himself.

So How Does a Talk Box Work?

The talk box allows you to manipulate your guitar tone by passing signal through a tube which is amplified by a microphone. The signal is bypassed from your amp through the tube. So, to amplify the signal coming from the tube, you would tape one end of it to a microphone. This is so the signal coming from the tube is in close enough proximity to the microphone, that the microphone signal picks up the tube’s output. The other end of the tube goes into the pedal itself. You then put your mouth on the tube to manipulate the sound coming out of it by shaping your mouth with words.

Now, let’s experiment by taking a dry talk box signal and pairing it with different FX pedals to see what new sounds we can come up with.

This was the pairing that I was the most curious about because I didn’t even consider using these pedals together until wanting to make this post. I would imagine that in the studio, one may ask for a touch of reverb or delay on a talk box as they would most other things, but I was curious about using this as a very present effect.

This turned out to be one of the pleasant surprises. The delay pedal got a softer tone out of the talk box, and took the edges off of the tone signal. Everything sounded a bit blurry as I dialed in more delay. If you are looking for a way to make your talk box more atmospheric, this is the way to go!

While the song doesn’t use this effect, the vibe of this pairing reminds me of an Ozzy Osborne song called “Scary Little Green Men.” It has a very ominous sort of sound to it. It’s a combination that lends itself to slower, more articulated playing. Trying to play fast with heavy phaser muddies up what you are hear, so adding talk box does not help. This pairing works best when articulating chords.

Personally, when I think of the Dyna Comp, I think of Slash. The first time I saw someone use it was when Slash used it live during the “Rocket Queen” solo. It was very articulate and sharp, and that’s what I felt the Dyna Comp would provide the talk box sound. I predicted it would also make it snappier, which can help create a new sort of tone…or the foundation of one at least.

The Dyna Comp adds a very nice, subtle color to the talk box tone. It also makes it a hair more aggressive, almost like a slight boost would. The Dyna Comp is something I would have on in the background with all of my other pedals, but makes the chain even better with when interacting with the talk box.

This pairing was something I knew I would love. The talk box already has a sort of growl to it that makes it unique. Adding the Slash Octave Fuzz adds to that growl nicely. Whether it’s adding to the heaviness of your riffs, or pushing searing solos over the top, adding this pedal just gave the talk box a unique, modern hard rock flavor that I personally love.

I used a Hall Of Fame Reverb 2 pedal with this test. My favorite setting is the “shim” preset because of the atmospheric overtone effect is creates. Adding this to the talk box really just created something over the top. In this recording, the shim setting is being used with the arpeggiated guitar, while the lead is using a hall reverb. In any setting, I would add a touch to the talk box sound anyway, but using it in a more present way really created something enveloping.

For fun, I decided to try the wah with the talk box. This is a bonus experiment because adding a talk box to a wah seems a bit redundant, given that you could just make the wah sound with your mouth. However, I decided to see if the wah pedal added anything to the mix for fun!

I discovered a couple of things. First, you can use this wah to substitute your own voice. This is obvious, but the cool thing about it is that while you have the wah sound forming, that leaves you free to add other sounds to the mix. You could shape the wah by closing or opening your throat. Or, you could voice syllables in conjunction or contrast to the wah pedal. In any case, it can be a bit tricky to work with, and I wouldn’t use this combination in a live show but it was fun to experiment with nonetheless!

At the end of the day, these experiments showed me, and hopefully you as well, that there’s a lot more to do with a talk box than initially meets the ears. The possibilities are endless with guitar pedals, but they are incredibly unique when pairing them with this very special effect. These experiments inspired me to expand even more, and to include these pairings in my live sound to create something special. What new sounds can you come up with by pairing pedals with a talk box?