MXR Dyna Comp: Get the Most From Your Compressor Pedal 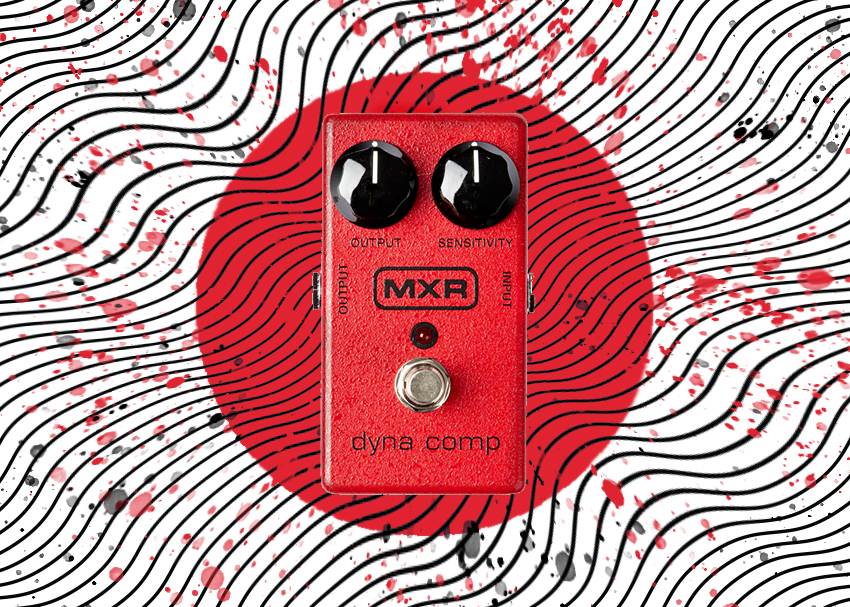 Before buying the MXR Dyna Comp compressor pedal, I did what any musician would do: I scoured the Internet for reviews of all kinds. I came across a few demo videos on YouTube and noticed something interesting: This pedal was only being shown in one light. The people demoing the Dyna Comp were using it for clean, twangy tones. More on that in a bit, but before we go any further, we should ask the question: what is compression, and what does the Dyna Comp do?

Generally speaking, compression can be described as volume control. When setting a certain level of compression on your signal, you are creating a ceiling for your volume. When a signal hits that ceiling, the volume is “compressed” to stay below the threshold. Any volume below that ceiling stays unaffected in this case. Now we can clarify the Dyna Comp — it is a simple, vintage-inspired compressor pedal made specifically for guitar signal compression.

I mentioned earlier that the demos I found showcased the Dyna Comp with clean, twang tones. Arguably, this is where this pedal truly shines, but I believed it could do more. I decided to experiment with the Dyna Comp to understand how its unique compression impacts midrange, and overdrive tones to show that it can make a difference no matter how you use it. We will be using a Gibson Les Paul Studio through a Victory Countess V30 MKII with the Dyna Comp running through the front of the amp.

Related: Compressor Pedals and You

VCA, FET, optical…there are several types of compressor pedals circuits out there…which is right for you? Read »

Before we really dig into the details, it would be important to note where in the signal chain the Dyna Comp is most effective. In this review, I ran the Dyna Comp straight into the amp with no pedals in front of it. However, if you are adding this pedal to your signal chain, I found it best to put it at the very front, after your tuner pedal, but before the rest of your pedals. My chain consists of distortion, phaser, chorus, reverb, and wah pedals. Generally speaking, I found that having the Dyna Comp before all of these pedals left the effects unaffected, and only impacted my tone, which is what I wanted. So, win-win!

How to use your Dyna Comp

As mentioned before, this pedal shines with clean tones. Why is this? It’s because when you add sensitivity, or the actual compression to the clean signal, it really tightens up the tone. This makes the pedal ideal for country lead lines, and makes it a killer weapon for funk playing anywhere on the neck. When going for a funk sound, I like to keep the sensitivity at about 60%. This adds a noticeable amount of compression without it being too much. At this level, this adds a nice amount of pop to upper register funk chords, and adds a nice crispness to lower register notes as well.

But what if you don’t always play funk? I tested the Dyna Comp in different styles using clean tones. To contrast the funk style, I used the pedal playing big open chords. Adding tightness to big open chords doesn’t sound like it would work on paper, but in practice, it gives the chords a unique character. I would suggest bringing the sensitivity down to 40% for this. It keeps the crispness while keeping the chords sounding open. It is essentially a chord that is both loose and tight at the same time. The first note will sound crisp, as it will be immediately compressed. But, as you strum the rest of the notes, it opens up as a gate would open after pushing it from the center.

Next, I moved on to midrange crunch tones. Something I noticed while working with this pedal was that the more gain and/or distortion colors you add to the signal with, the more you have to push the Dyna Comp to feel its impact. When switching to a midrange tone, the effect became more subtle, but noticeable in a different way than when using it with clean tones. I pushed the sensitivity knob to 70% when using my crunch tone. In the audio clip, you will hear low octave and high octave contrasting parts. Immediately, I noticed that the low end was tighter and more controlled. The muddiness that came from playing double-stop chords with a crunch setting seemed to be cleaned up by the DynaComp in a nice way that I was not expecting. I was only expecting it to feel tighter, so this was a nice surprise! Keep in mind, this was a subtle change, and I had the sensitivity setting at 70%, so if you are going for this sound and want even more of the muddiness cleared up, boost it to 100%!

Finally, I moved to my distortion setting. After the midrange test, I knew that I would really have to push this pedal if I wanted to feel a difference with a full-on distortion sound. So, for this test, the pedal is best used with sensitivity at 100%. First, I tested the pedal with low-to-mid octave power chords. Just as I found with the midrange crunch test, there was a subtle tightness to the low end. However, something interesting happened. I noticed that the low end of each chord seemed to have a bit of a stronger presence. It was like the very low end of each chord was being boosted slightly above the rest of the chord. This was where I noticed the biggest difference. After this, I tested out some lead/solo playing. I noticed a difference with the double stops at the beginning of clip sounding more cleaned up than it did without compression. The palm-muted ascending scale also seemed tighter. The run at the end seemed unchanged other than a slight sweetness that the pedal seemed to add to the tone itself.

The biggest thing I took away from experimenting with this pedal was that it is very percussive. It reacts the most to playing that is very rhythmic. However, the Dyna Comp adds a unique flavor to different kinds of tones. Whether it’s adding clarity to open chords, cleaning up muddiness and adding subtle tightness to crunch, making the low end of high-gain power chords subtly bolder, or adding a tinge of sweetness to high-end runs, there is a place for this pedal no matter what style you play! I used specific settings for each kind of tone that can serve as a guideline, but it is best to work with the sensitivity with each tone you are using. If you do not want to constantly change this setting, keeping it set at 80% will be very effective.