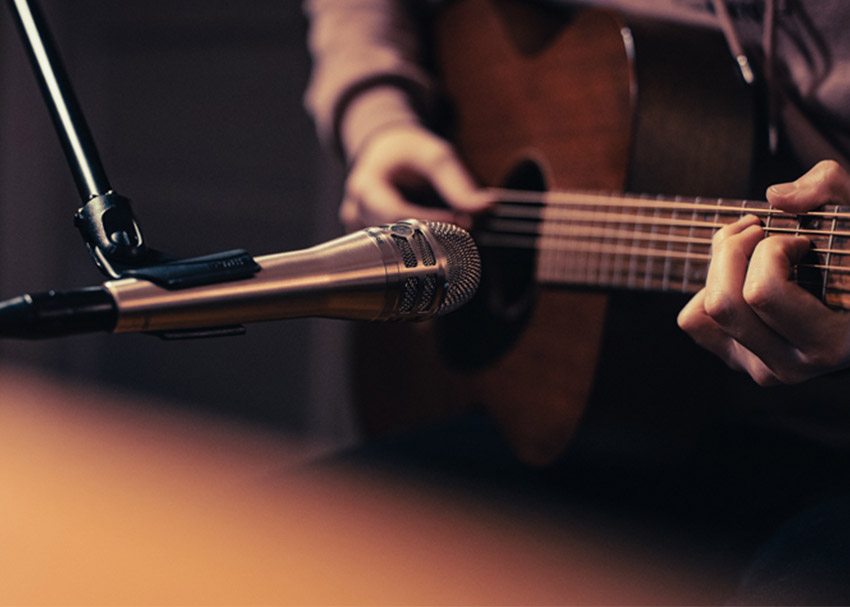 Dynamic mics are pervasive and for good reason. Whether you are gigging at the dive bar, opening at an arena, or making a demo in the basement, there is almost always a dynamic mic within reach. If that’s the case, shouldn’t we be pining for the highest quality possible in these ever present microphones? Shure certainly thinks so.

Shure’s SM58 is probably the best known and most widely used dynamic microphone on the market and has been a mainstay of venues and studios for decades. While there are a variety of reasons why the SM58 is so ubiquitous, the sheer utilitarianism of this mic (and dynamic mics in general) may be the leading cause of its widespread usage. Dynamic mics have a lot going for them! They are generally sold at a low price point, known for their durability, and are difficult to overload. This means they are good at sticking around and easy to replace when they can’t anymore. Furthermore, mics like the SM58 have low sensitivity, a generally tame frequency response, and a cardioid polar pattern, making them great at controlling on-stage noise and handling gain with little worry about feedback.

This all seems great, so what are the drawbacks? Well, there are a few notable ones. Cardioid mics, or directional mics, tend to struggle with proximity effect (amplified bass frequencies when close to an audio source), have a generally “dark” sound with less pronounced high frequencies, and relatively low output. This usually means that we wouldn’t grab an SM58 to record vocals in the studio or that we have to be very particular with mic placement on certain audio sources like an acoustic guitar, which can become very boomy very quickly.

Shure wanted to address some of these issues with the KSM8. For starters, they have introduced a signature “Dualdyne” dual diaphragm cartridge which aims to combat proximity effect, allowing a user to experience a larger “sweet spot.” The mic can be used at a wider range of distances than some of its peers, allowing for more flexible mic placement for vocalists or instruments and reduced off-axis coloration. Placing a dynamic mic off axis is another commonly used tactic to further combat proximity effect. By making a mic sound more natural when placed off axis, this provides even more opportunity to play with mic placement without sacrificing tonal characteristics.

So, will the KSM8 offer an upgrade to your dynamic mic game that’s worth the price difference? Well, let’s test it out!

While the KSM8 is clearly designed for the stage, the nature of live music in the time of COVID means that our ability to test the mic in live scenarios was pretty limited. While I will share about my experiences with the mic in live situations later, let’s first hear and see some tests of the mic in the studio for more quantifiable results!

First, let’s hear some examples of the KSM8 next to the SM58 to have a point of reference. I recorded both mics with vocal examples for comparison. All of these examples are recorded in a home studio with very minimal treatment. The mic goes straight into an Antelope Audio Discrete 4 with no plugins running. There is no post processing added to these examples, either.

Here are three simple vocal examples of both the KSM8 and the SM58. The microphone is about 6 inches from my face and I tried to sing in a few different registers in order to test frequency response. Pay close attention to the high- and low-end response and see if you can spot any differences! (It is also worth noting that the higher output level of the KSM8 meant that I had to compensate with added gain on the SM58, so there may be slight discrepancies in the gain level).

When comparing examples, you can hear a few key differences right off the bat. The KSM8 has a generally flatter response than the SM58. The SM58 has more of a high-end roll-off on purpose. In live scenarios, it is easier to control noise, sibilance, and proximity effect by making the response curve more round. Because the KSM8 uses the dual-diaphragm system to help control some of these issues, the response curve can be flatter, leading to a much more natural sound. This also helps to create a brighter sound with more clarity than the SM58.

You will also notice more plosive noise on the SM58 and more sibilance noise on the KSM8 due to these differing responses. Lets listen more closely to those in the following examples:

A mic’s sensitivity to vocal plosives is of course affected by the mic’s ability to handle proximity effect, so let’s also hear an example testing how each mic handles the voice at different distances. I started with with my mouth touching the grill, moved to about 8 inches from the mic, and then a little over a foot away from the mic. Here you can hear a better example of A) how the KSM8 can better handle proximity effect and B) how there is a slightly larger “sweet spot” (in terms of distance) on the KSM8.

Now that we have heard how the mic reacts to vocals, let’s switch to a less common dynamic mic source: acoustic guitar.

(All guitar examples are recorded using a Martin 000-15M)

Let’s start by hearing how the mic handles proximity effect. Pretty much the worst way you can use a dynamic mic to mic an acoustic guitar is to point the mic directly at the soundhole. Proximity effect will quickly turn your recording into a boomy mess — even on an OM style guitar like my Martin 000-15M — but let’s use this method just to test the mic’s response. These examples are recorded 6 inches away, off-axis, pointed straight at the soundhole with both the KSM8 and the SM58.

While neither of these examples sound great, you can hear a clear difference in how the mics respond in the low end. The SM58 has an omnipresent rumble while the KSM8 just has an unpleasant boom.

Now lets here the mics placed 6-inches from the guitar, positioned at the 12th fret. You will hear one example with each mic both on-axis and off. Notice how the tone of the KSM8 is less affected by the off-axis positioning than the SM58 is, another example of the dual-diaphram system working its magic. You may also notice the higher noise floor on the SM58. This is partially due to the gain differential between the two mics and partially due to my relatively untreated room.

Now let’s finish by hearing how the KSM8 can sound in the context of a quick demo! I chose to place some parameters on myself: part of the beauty of the KSM8 is its convenient form factor for quick studio use. In order to demonstrate laying down a simple idea for a demo, I chose to only make one pass of each part with no click. It took me 4 minutes to record two simple guitar parts and a vocal track, just to lay down an idea quickly. After the fact, I did some quick processing and voilà: a quick, rough demo. Each guitar part has added preamp emulation, compression, EQ, and reverb/delay. The vocal track also has added preamp emulation, compression, EQ, and is going to effects Aux tracks.

I play a reoccurring gig at a famers market once a month and the event is outdoors under an elevated train stop in the city. Now you may be thinking, “Under a train stop? That sounds like a horrible setting for live sound!” You are correct, my friend; However, dynamic mics like the KSM8 are designed to limit bleed so this gig was a bit of a trial by fire for the microphone. All-in-all the mic performed swimmingly! I normally perform this gig using a Sennheiser E935 as this mic, like the KSM8, helps to accentuate the mids and highs a bit more which works well for my style of voice. This meant that I did not have to significantly change my mix settings. The KSM8 also did a much better job at handling distance from the mic, allowing me, as a performer, to feel less tied to the stand. I also felt the additional headroom this mic had, allowing me to lower the gain and, in turn, have a lower noise floor. The KSM8 did the job and it did it well, especially in a very unforgiving live environment. It would have been nice to be able to test the mic in a more isolated live room and with a dedicated mix engineer, but my personal experience with the mic was excellent.

What About the SM7?

Any discussion about Shure dynamic mics, especially one that involves the studio, must mention the SM7, one of Shure’s most popular mic designs and a modern studio mainstay. Truthfully, I did not have an SM7 handy to test the KSM8 against, but lets just cover a couple of quick points:

The SM7 and KSM8 are very different mics and one is not trying to be the other. The SM7 is primarily used in studios and broadcast environments and has a very different response curve because of its target application. The KSM8 is designed for live use and aims to offer greater flexibility than something like an SM7 can. Honestly, when in the studio, one would rarely reach for a mic like the KSM8 over an SM7 when recording vocals simply because the KSM8 is not targeted at studio use. This is not to say that is objectively worse for studio application, just that it is simply more of a utilitarian mic.

The SM7 also has famously low output, causing many users to need additional gain from something like a cloud-lifter to use the mic at all. The KSM8 will almost never need more gain than you have access to, is a more portable microphone, and has a more robust design to withstand the rigors of the road. Again, these are not necessarily features the SM7 needs since it is not generally meant for live use.

In short, even though they are both Shure dynamics, they are very different mics. Both are great, just with different skillsets and comfortable staying in their own lanes.

Is the KSM8 Worth It?

There is no ultimate right answer to this question, but I will share my closing thoughts and let you decide for yourself.

The KSM8 is, in most ways, an improvement to the SM58. It is a more flexible mic with more headroom, a more natural sound, and with better control over its surroundings. While the flatter response curve may change your mix or even the way you mix, I would argue it is an easier sound to work with in most contexts. With that being said, your venue, budget, and personal style will all factor into whether this upgrade is necessary for you. If you find that you struggle with taming other present sound sources in your venue, adding another present sound source like the KSM8 may just introduce more issues. The price tag is certainly steep compared to the very reasonably priced SM58, and you may just love the way your 58 sounds! Not to mention that there are still tons of other dynamic mics from Shure that could also be great additions for you, like SM57s, SM58 Betas, or SM7s.

If you are someone that has a controlled environment to work in that would love to upgrade your sound quality from an SM58, the KSM8 is certainly worth a shot. If you want a robust, easy-to-use dynamic mic to travel with that has an elevated frequency response, the KSM8 may also be right for you! With Shure, you can’t go wrong, so why not try something new?