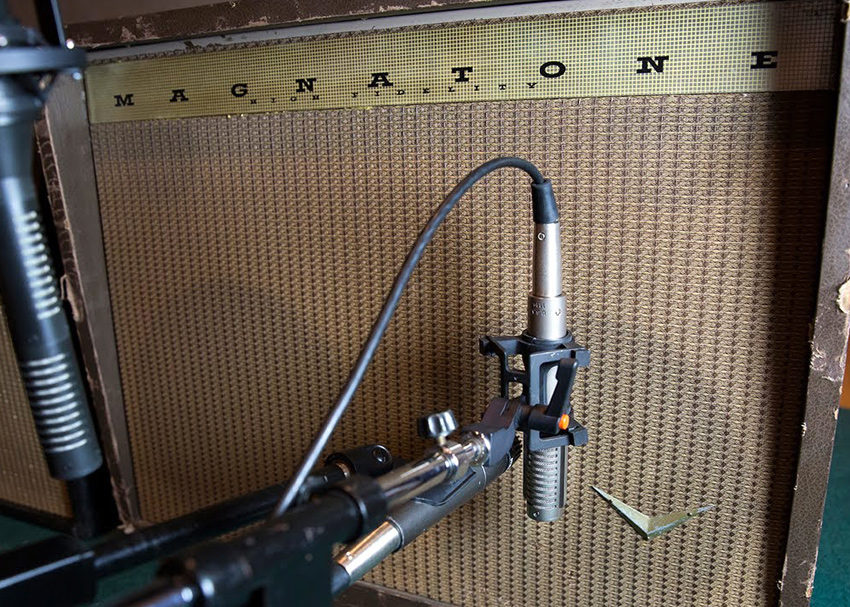 Recording electric guitars seems like a pretty easy feat of engineering. All you have to do is place a microphone in front of a speaker and call it a day, right? As it turns out, there’s a little more to the equation than that. In a process where fractions of an inch can dramatically change your overall sound, recording electric guitars requires focused listening and a good sense of how the guitar’s sound will fit within the mix of a song. Join me as I take a closer look at a handful of mic placements and listen to the differences they produce.

For the audio samples I used my Gibson Les Paul Standard plugged into a Boss DD-500 Digital Delay, then into the Electro-Harmonix Op Amp Big Muff, then finally into a Vox MV50 AC with the matching BC108 1×8″ speaker cabinet. To ensure each performance remained the same in between changing the mic’s placement, I used the looper function on the DD-500. I threw up a Shure SM57 about an inch in front of the grill cloth, and sent that to a Black Lion Audio B173, into my Focusrite 18i8, and recorded into Logic. I recorded the samples through the Big Muff since the distinctions between mic placements are most apparent with distorted signals. I used a Boss DD-500’s looper function to feed an Electro-Harmonix Op Amp Big Muff to create the sounds.

Generally speaking, placing a mic in front of the center of the speaker produces the most high end, and inching it toward the edge will emphasize the the lower-end of the spectrum. As you can hear in the samples, the center position produces high-end fizz. Many engineers like this position since more of the full signal is captured. You can always take away frequencies with EQ during the mix, yet you can’t boost any frequencies that weren’t there to begin with.

Not only does a microphone’s position in front of a speaker affect the tone it produces, but its angle also plays an important role. Pointing a microphone straight-on facing the speaker is known as on-axis placement and results in a brighter tone. If you point the mic at an angle, this is known as off-axis placement. Off-axis miking darkens the sound up just a hair, and is also less susceptible to proximity effect. Proximity effect is the build-up of low frequencies that is inherent in the design of directional microphones. You can use this to your advantage, or notch it out with a little bit of EQ. Example of off-axis microphone placement. The pink tape denotes the where I miked the center, middle, and edge of the speaker.

As you can hear in the samples, even something as simple as angling the microphone at a 45-degree angle can drastically change the sound of your guitar. Since there are so many possibilities when choosing the mic placement for your amp, there’s no reason to wait until the mix to make your guitar sound the way you want it to. Why fix it in the mix when you can take care of the problem at the source?

Experiment with mic placement on your own and find out what works for you. As with most everything in the recording world, there isn’t a wrong way to do things as long as the music sounds good to you!