Headphones Ohms Ratings Explained. What you need to know about headphone impedance. 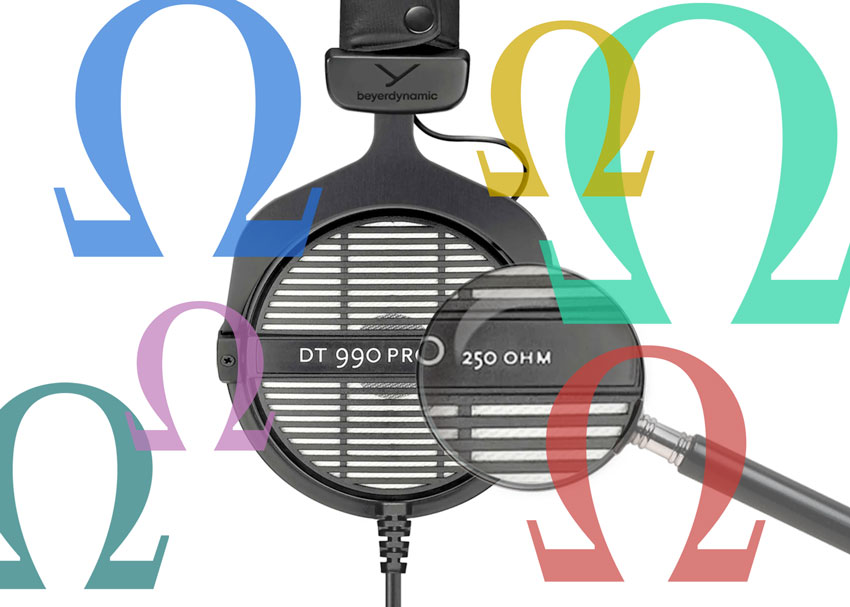 Let’s compare low-, mid-, and high-impedance headphones, and look at the use cases they fit best.

Low-impedance headphones: Up to 32 ohms

Low-impedance headphones are a good match with the headphone outputs on battery-powered consumer devices like smartphones, tablets, and laptops. These headphones don’t require much voltage to drive them, so they’re likely to be plenty loud with all your small, portable devices. But be careful — if you plug an 8-ohm pair of earphones into a pro DJ mixer and turn it up to the max, you’re likely to blow them out. Even if you don’t damage your earphones permanently, you’ll get bad-sounding clipping distortion.

Low-impedance does not mean low-quality. In fact, Audio-Technica’s high-end ATH-IEX1 earphones have impedance of only 5 ohms! Most in-ear headphones and professional IEM earphones are relatively low-impedance. For example, Sennheiser IE 400 PRO earphones are 16 ohms, and Shure SE215 earphones are 20 ohms.

Mid-impedance headphones: Between 32 and 100 ohms

You generally can’t go wrong with headphones in this middle ground — they can work with a wide range of equipment. Pair them with the headphone output on your DJ mixer, audio interface, or standalone headphone amplifier, and they’ll really shine. You can also plug them into portable consumer devices like your smartphone, and they’ll sound good, although they’ll likely be noticeably quieter than low-impedance headphones. If you want your mid-impedance headphones to be loud enough when driven by battery-powered devices, look for a sensitivity rating of at least 100 dB SPL per milliwatt. (See “What about headphone sensitivity?” below for more on sensitivity.)

High-impedance headphones: 100 ohms and up

These relatively high-impedance headphones require more source voltage than a consumer device can typically provide. If you plug a pair of 250-ohm headphones into your mobile phone, you won’t hear much, even at max volume. They’ll usually require a standalone headphone amplifier, or a quality audio interface with a dedicated headphone amp built in, to drive them properly and produce enough voltage to unleash their great potential.

Back in the old days, way before laptops and iPhones were common, traditional studio and broadcast gear was relatively high-voltage. If you were an engineer plugging your headphones into the board, you wouldn’t want to overload your headphones and risk damaging your ears. High-impedance headphones offered protection against that risk.

But if high-impedance headphones require so much voltage to drive properly, and generally don’t play nice with mobile devices that are the norm nowadays, why do they still exist?

Well, manufacturers don’t exactly set out to make headphones with high impedance. It’s more of a “side effect” of choosing components that sound good. For example, Beyerdynamic is known to use delicate, super-thin wire to wind their moving-coil headphone drivers. This results in densely packed voice coils with very little air between each layer of wire, so you end up with a driver that’s light in weight, yet has a strong electromagnetic field, which reduces distortion. And of course, that super-thin wire has fewer electrons to carry current, so it impedes the flow — resulting in a high-impedance headphone.

What is “Nominal Impedance”?

Manufacturers report their headphones’ impedance as a single number — the “average” or nominal impedance. But that single snapshot doesn’t tell the whole story. In the real world, impedance varies — sometimes drastically — across the headphones’ frequency range. This is true of headphones with conductive moving-coil drivers (most full-size cans), and headphones with multiple balanced armature drivers (most earphones). A notable exception: headphones such as the Avantone Planar Open-Back Headphones, which use planar magnetic drivers, resulting in a relatively flat impedance range.

Your so-called “64-ohm” moving-coil headphones may have impedance that peaks at 160 ohms at 80 Hz, and dips down to 60 ohms at 3 kHz. The nominal impedance of 64 ohms is measured at 1 kHz. It doesn’t tell the whole story, but it’s a useful shorthand spec.

What about headphone sensitivity?

Have you ever noticed that the same pair of headphones can sound quite different when plugged into different devices? That’s because each device’s output has an impedance rating, too.