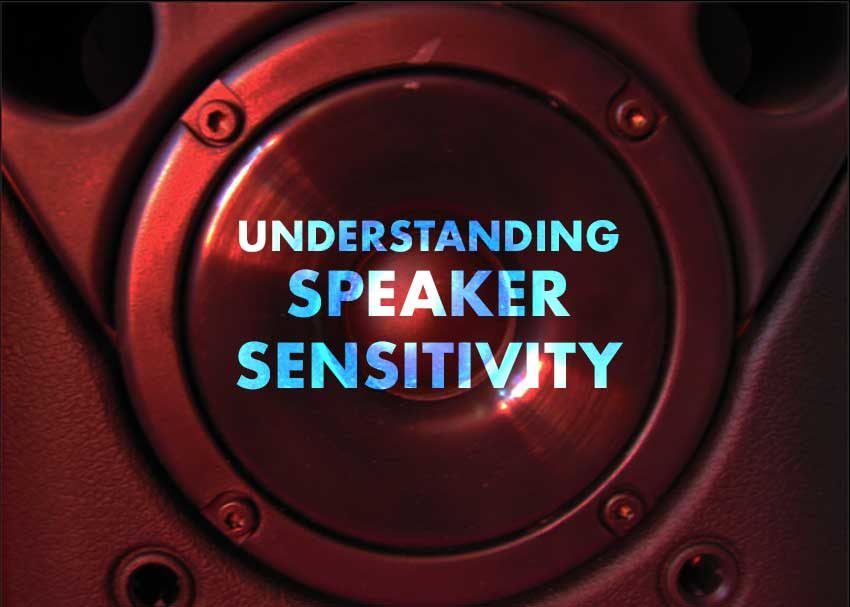 When choosing a passive loudspeaker, one of the most important specifications to look for is sensitivity — a measure of the volume output you can expect from the speaker, relative to its input power. Speaker sensitivity reflects the speaker’s ability to efficiently convert power into sound.

Why Does Speaker Sensitivity Matter?

Sensitivity matters because a speaker requires twice the power, or wattage, to increase its output by 3 decibels — about a 23% increase in terms of perceived loudness. For example, to increase the output of a 100-watt combo amp by 3 dB, you’d need to add a new amplifier section that could deliver 200 watts of power. Instead of an expensive amp upgrade, you could likely achieve the same result more economically by swapping out your speaker cone with one that’s just 3 dB more sensitive.

Thanks to speaker sensitivity, higher wattage doesn’t always mean louder. If an 800-watt loudspeaker is 1 dB more sensitive than a 1000-watt speaker, it’ll actually deliver a higher peak SPL (sound pressure level). The more sensitive a speaker is, the less power it needs to put out the desired volume.

Speaker sensitivity is sometimes referred to as “speaker efficiency.” All loudspeakers could be considered relatively inefficient, in that they generate a fair amount of waste heat. But more sensitive speakers require less power and generate less heat, which in turn means their components can last longer. Over time, more sensitive speakers can be a more economical choice, even if they’re more expensive up front.

How is Speaker Sensitivity Measured?

Traditionally, speaker sensitivity is measured with the standard of 1 watt/1 meter. This means the speaker is fed an audio signal — typically a 1 kHz tone — with 1 watt of power. Then, a microphone is placed 1 meter away from the speaker to measure its output in decibels. If a speaker has a sensitivity rating of 85 dB SPL, it’s supposed to be able to output sound at the volume of 85 dB, as measured by a microphone placed 1 meter away while the speaker is driven by that 1-watt signal.

Rule of thumb: Look for loudspeakers with a sensitivity rating of 90 dB SPL (1 watt/1 meter) or higher.

Unfortunately, since loudspeaker manufacturers don’t all follow the same stringent measurement methods, you can’t always compare like-for-like between sensitivity ratings of different manufacturers’ speakers. But sensitivity specs can be useful when comparing speakers from the same manufacturer.

For a real-world example, consider the venerable Yamaha BR10 passive loudspeaker and its newer cousin, the Yamaha CBR10 passive loudspeaker. The BR10 offers 125 watts continuous/500 watts peak power, with a sensitivity of 96 dB SPL. The newer CBR10 ups the wattage: 175 watts continuous/700 watts peak, but with a lower sensitivity of 94 dB SPL. In the end, both speakers deliver the exact same peak SPL of 123 dB. You can expect the same volume out of either speaker, even though the newer speaker is a bit higher in wattage.

Does this mean the older BR10 is the better bargain? Not necessarily: The newer CBR10 offers a wider frequency range with deeper lows. It’s also much lighter in weight — only 20.7 lbs vs. the BR10’s 31.5 lbs. Those features may make the CBR10 a much better deal to you. Just don’t expect it to be much louder simply because it’s rated at 700 watts peak vs. 500 watts peak. The higher the speaker’s sensitivity rating, the higher SPL the speaker will output when driven with any given wattage. In simple terms, higher sensitivity means louder. And louder, of course, is what we all want our loudspeakers to be.

For you psychoacousticans out there, it’s worth noting that “loudness” is a subjectively perceived feeling, whereas decibels SPL is an objective measure. The same exact sound won’t result in the same perceived loudness to every ear. And your own perception of a sound’s loudness can vary depending on exposure time, frequency composition, bandwidth, information content, how the sound changes over time, and maybe even what you had for breakfast that morning… Suffice it to say that the loudness of a sound, as perceived by your ears and brain, does not necessarily conform to corresponding changes in sound pressure level. That’s why we use measurement microphones and SPL meters; our ears aren’t great at objective measurements.

Why Aren’t All Loudspeakers Sensitive?

If sensitive speakers are so efficient, why don’t manufacturers always produce speakers that are as sensitive as possible? Because there are trade-offs that must be made to achieve a balance between sensitivity and other desirable speaker characteristics. Engineers could make a speaker cone lighter to increase its sensitivity, but a lightweight cone is generally more flexible — which means it’s more susceptible to distortion.

So, do you really need highly sensitive speakers? If you’ve got a rack of amps pumping out lots of power, speaker sensitivity may not matter that much to you: you’ve already got the wattage you need to achieve the desired volume. But if available wattage is a constraint, a more sensitive loudspeaker can definitely help you squeeze more volume out of each watt.

Photo attribution: “lOuDspEAkEr.” by shivaelektra is licensed under CC by-nc-sa 2.0