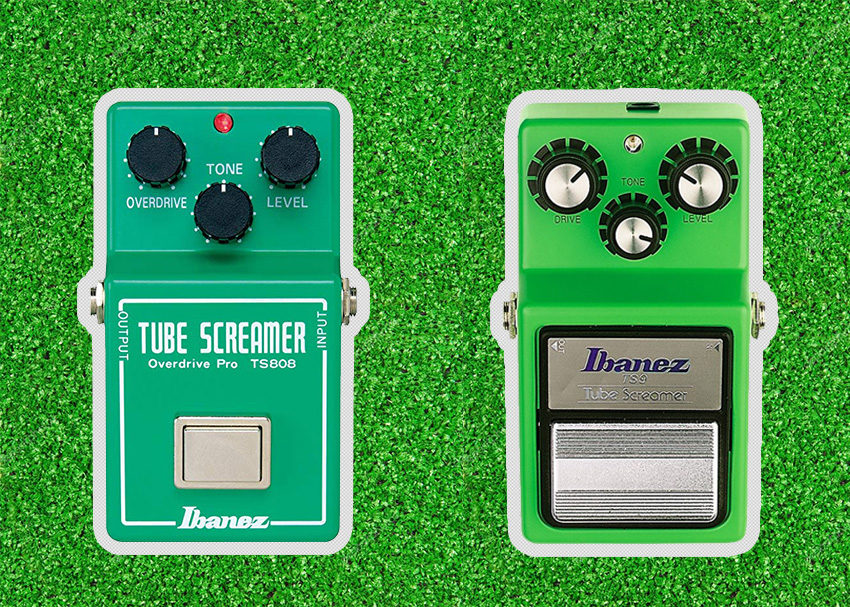 2019 marks the 40th anniversary of one of the most iconic and most copied overdrive pedals of all time: The Ibanez TS808 Tube Screamer. Designed by Maxon and re-branded by Ibanez, the Tube Screamer has been a favorite among guitarists of all genres. Whether you’re trying to get the sweet bluesy break up of Stevie Ray Vaughan, or pushing your already dirty amp past 11, this pedal adds a unique flavor to your tone.

The pedal was first designed to be direct competition for the Boss OD-1. The main difference between the two designs is their respective clipping methods. The OD-1 used asymmetrical clipping, in which the top and bottom of the sound wave are not distorted the same way, which is more similar to the way a tube-driven amp will break up. Ironically enough, the “Tube” Screamer uses symmetrical clipping to achieve its overdrive. Aside from this, and with the addition of the tone knob on the Tube Screamer, the pedal designs are fairly similar.

During this time period, pedal manufacturers were trying to find new ways to emulate the classic sound of an overdriven tube amp, since so many guitarists were moving to solid state amps. This is why Ibanez decided to go with the name “Tube Screamer.” With the success of the TS808, Ibanez went on to build several different versions of the classic overdrive pedal. Among these are the TS9, STL, TS10, TS9DX, TS7, TS-808HW Hand-Wired, and several other re-issues. Today, they even have the Nu Tubescreamer which utilizes Korg’s Nu Tube technology.

While there are several clones and pedals inspired by the TS circuit, I am going to compare the two most common iterations: The Ibanez TS9 and the Ibanez TS808. This tends to be a hot debate topic for fans of the Tube Screamer and pedal enthusiasts alike. You’ll hear a lot of people say “The TS9 is better for leads” or the “TS808 is warmer” and all sorts of other misleading information that doesn’t always line up. So today we’ll clear up the B.S. on the TS, and let you decide which one you prefer.

To compare the tones, I’ll be using my PRS SE Custom 22 Semi-Hollow for humbucker tones, as well as a G&L Tribute Series S-500 for single coil. The hotter output of the G&L MFD pickups seemed like a good match to compare against the PRS. In the interest of keeping things green, I’ll be plugging into my British Green ’65 Princeton Reissue and keeping it pretty clean to let the tonal characteristics of the pedals shine through. It’s all mic’d up with a Shure SM57 into my UA 710 Twin-Finity Mic Pre, and into Logic Pro X with my Apollo Twin interface. I’ll be keeping these tracks dry with no compression or any other plug-ins to get the true sound of these pedals.

A lot of players use the Tube Screamer similarly to a boost pedal. With the gain dialed almost all the way down and the level just above noon, you get a nice boost that can really fill up your mid range and even start to push a clean tube amp into breakup territory. For the first example, I’ll be using the G&L on the neck pickup. With the pedal overdrive set at about 7 o’clock, tone dead center, and the level just past noon on both Screamers.

For this next example, I’ve dialed in a nice middle-of-the-road distortion. With the overdrive and tone dead center, and the level dialed back to about 11 o’clock to keep the overall volume consistent. I played the same part with both the G&L and the PRS to compare how each pickup type reacts with the pedals. You’ll notice how the PRS pushes the pedals a little further into overdrive territory than the G&L. I’ll be using both pickups on the PRS and the neck/middle combo on the G&L.

For this next example, I thought I’d take a look at how the tone knob reacts on each pedal. I looped a short riff on the PRS with my Boss RC-2, and slowly swept through the tone knob on each pedal to see how they react differently. I’ll play the loop once clean and then dial the tone in from zero to 10 and then back to center. Level and Overdrive are set the same as the previous example.

For this example, I rolled the level back slightly and cranked the overdrive all the way up. I decided to go with the bridge pickup on the PRS for this one to get that nice crunchy classic rock tone. I dialed the tone back to about 11 o’clock on both pedals to warm up those piercing high notes.

And finally, if you can’t decide which Tube Screamer is right for you, you might as well use both! For this last example I’ll be soloing over a short backing track that I made. I have my TS808 running at a lower gain, then halfway through I stack on the TS9 to really put things into overdrive.

And the winner is…

Well that’s all folks! Hopefully this helped clear up some of the myths on these pedals, but the only way to know for sure is to try them out yourself! Both of these pedals are available at zZounds, along with several other pedals inspired by the Tube Screamer!

In addition to blogging about gear, the experts at zZounds have been making it easy for musicians to purchase the gear they need since 1996!