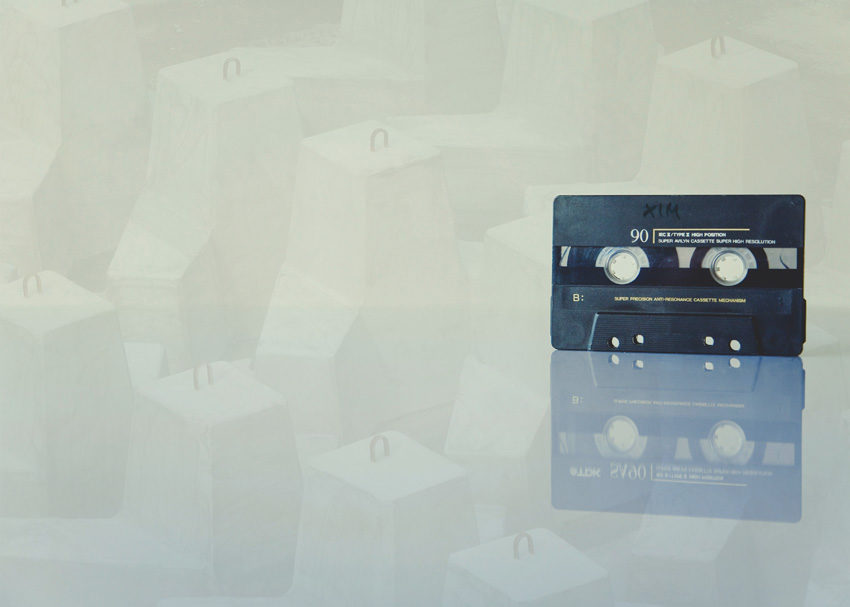 From scholarly and avant-garde beginnings to ambient soundscapes of the 21st Century, there is something for virtually every listener and performer to be found in tape music. What we’re discussing here is not just a performance recorded to tape, but compositions, experiments, and live sets using tape as an instrument.

It would be impossible to discuss tape music without starting with Halim El-Dabh. El-Dabh was possibly the earliest known proprietor of tape music. In 1944 he recorded a public exorcism with a borrowed wire recorder, already having in mind the possibility to manipulate the captured sounds. This recording is what became “The Expression of Zaar” (sometimes referred to as Wire Recorder Piece). What was done to these recordings may seem very simple now, but keep in mind, this piece was made when the second World War was still taking place.

El-Dabh took his recordings to the Middle East Radio office, (where he initially borrowed the recorder) and began running his recording through echo chambers and a re-recording room to alter its sound and isolate specific frequencies. What resulted from these aural alterations was something completely unrecognizable from its source. This was possibly the first ever “sample” turned into a 20-minute ambient piece that would make even Brian Eno jealous.

Musique Concrète and the Two Pierres

Musique Concrète (or concrete music in English) is a very early genre of electronic music specifically dedicated to using recorded sounds as a source material to appropriate into entirely new music. The leading heads of this genre were Pierre Schaeffer and Pierre Henry. Schaeffer first began experimenting with pre-recorded sounds in the mid 1930s, although early efforts were mostly done with phonographs. It wasn’t until after the war that Schaeffer and Henry met and were able to open a new studio with a tape machine.

The sort of composing the two Pierres did was revolutionary in how music was approached at that time, and many of their techniques carried all the way through to the present. Schaeffer and Henry would splice the tape of their source recordings together at various points, running the source tape at different speeds, reversing them, and making other manipulations. They were creating impossible music the world had never heard before with sounds as basic as a bird singing, or a train chugging along.

Schaeffer and Henry commissioned several builds of custom machines to simplify their methods. Two machines worth noting are the Phonogene and the Morphophone. The Phonogene allowed for chromatic playback of tape via speed variation (not totally dissimilar to a Mellotron, but predating it significantly), and was polyphonic over three channels of samples simultaneously. The Morphophone allowed for loops of tape to be filtered through delays and complex feedback systems with twelve movable playback heads, a recording head, and an erase head. Each tapehead was coupled with a bandpass filter and amplifier to allow for extremely complex tonal shaping. These two machines were well ahead of their time, and were both used extensively throughout Schaeffer’s and Henry’s careers.

Musique Concrète largely ignored musical convention in regards to rhythm and melody, creating sound collages that would make college students argue over its value as music for years to come. What it did objectively accomplish was its influence on sound editing, engineering theory, and paving the way for experimental music as well as how experimental music might interact with more accessible music.

Compare Symphonie Pour Un Homme Seul by Pierre Schaeffer and Pierre Henry to The Beatles’ Strawberry Fields Forever. A lot of similar techniques like playing tape back at different speeds, using non-musical sounds in musical ways, playing things back in reverse, were made conventional by the world’s biggest band just over a decade later.

It’s hard to discuss unconventional compositional techniques without bringing up John Cage. John Cage began composing for tape around 1951 when he began writing Williams Mix. John Cage had a few contemporaries (Bebe and Louis Barron, famous for scoring Forbidden Planet) record a variety of sounds ranging from field recordings, to electronically produced ones. The score for these works is a feat of its own. It features a life-size drawing of tape fragments designating splicing spots which ended up being a whopping 193 pages. Like many of Cage’s works, this composition leaves itself to chance, allowing any kind of tape recordings to be used, so long as they are spliced according to the score. It is worth noting that the first known tape music in the Americas was composed by the aforementioned Barron family, predating Cage’s work by one year.

The 1950s and 1960s saw more and more artists take on musique concrète, most of whom were alums of Pierre Schaeffer’s Club d’Essai studio. We saw the likes of Jean Michel Jarre, Charles Duvelle, Jacques Poullin, and Karlheinz Stockhausen either directly work with, or be heavily influenced by Club d’Essai, and later The Groupe de Recherches de Musique (Schaeffer’s subsequent studio).

In 1965 and 1966 we saw two of the most influential and debated tape pieces come to fruition by composer Steve Reich. Reich was influenced by the early stages of minimalist composition to use simple musical motifs that change gradually over time. The first of these two pieces, It’s Gonna Rain is a simple field recording of a Pentecostal preacher spliced into loops which gradually shift in and out of time to create the first ever phasing music. In essence: phasing music is created when one musical phrase (or non-musical phrase) is doubled, and one part of the phrase stays stagnant in time, and the other moves slightly slower or slightly faster, which can vary from drastic offsetting ostinatos, to very subtle swooshing sounds created when the speeds are very similar to each other (like a phaser pedal.

The follow-up piece, Come Out was more political in nature, sourced from a speech by a falsely accused murderer. Come Out expanded on the original It’s Gonna Rain, by multi tracking the tape loops, eventually into eight layers. This giant layering technique becomes very jarring to the ears, creating subdivisions of rhythms, and even notes, from simple human speech. Imagine hearing this in 1966.

Naturally the psychedelia of the late 1960s did not shy away from the nature and influence of tape music.

One very notable direct collaboration involved Pierre Henry. In 1967 Henry released (in collaboration with Michel Colombier) a song titled Psyché Rock. There are a lot of elements of this song that one would find instantly familiar. From the Henry Mancini-esque horn and flute section, the squelching synthesizers rearranged on tape, and the classic late 1960s rock band backing.

This particular song led to collaborations with Spooky Tooth, as well as a ‘more conventional’ approach to tape music in general. This piece is instantly more accessible to a wider base of people — so accessible in fact, that there would be no Futurama theme without it. Christopher Tyng, the composer who wrote the Futurama theme calls it more or a variation on Psyché Rock than an original piece.

What we can take away from the early years of tape music more than anything is its creativity and willingness to explore. Tape music went on to heavily impact way we look at sound; where a sound starts and stops, the direction the sound travels, and how these can influence us as listeners and performers.

Had these moments in musical history never taken place, there would be no horror movie soundtrack as we know it, no Futurama theme, no psychedelic rock as we know it. Sure all those things likely would have taken place, but they wouldn’t be the same. Lest we forget tape music’s love affair with directors, dance companies, and visual artists. Virtually every composer I mentioned in this article had collaborations that were not explicitly music-oriented, yet shaped our outlook on media, whether directly or indirectly.

I encourage you to take as deep a dive into tape music as you can, because there can be more to sound than just hitting record and ending the process there.