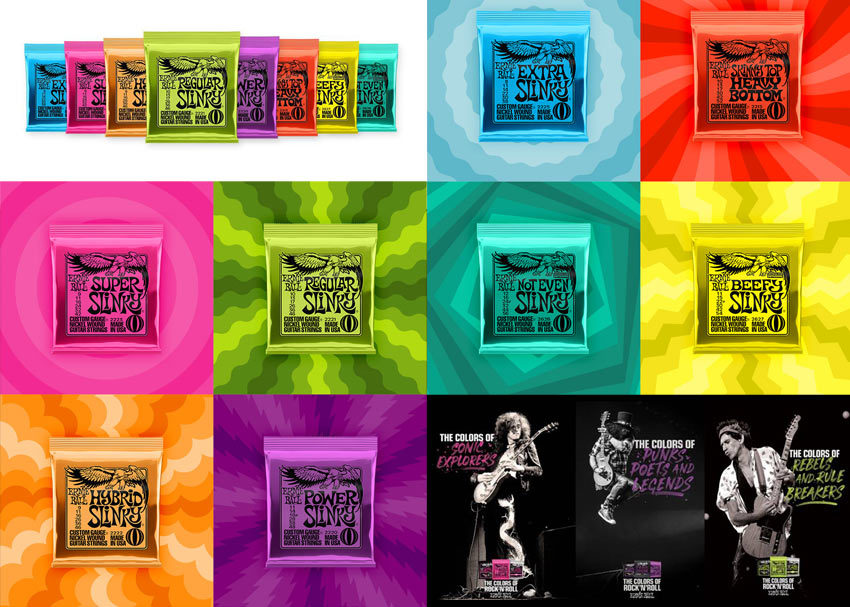 The packages that Ernie Ball Slinky strings come in are nearly as recognizable as the artists whose names are listed on the back. This year, Ernie Ball is honoring both with The Colors of Rock ‘N’ Roll campaign that celebrates the legacy of their colorful packaging, and an update to the “Back of the Pack” list of artists who play Slinky strings.

The Colors of Rock ‘N’ Roll

Players famous and unknown alike identify themselves with the color, or gauge of Ernie Ball strings they play. And whether you’re a Super Slinky Pink, Power Slinky Purple, Regular Slinky Green or another shade, you can rep your string set with some sweet limited, edition swag. The Colors of Rock ‘N’ Roll limited edition posters, t-shirts, patches and buttons will be available on Ernie Ball’s website for a limited time. Designed by graphic artist Aaron Draplin, the artwork was a labor of love, as he’s a musician himself and the Slinky string packs were an early influence for him.

Fun fact, the original Ernie Ball font and eagle logo (still featured on packs today) was created by Rolly Crump, a high school classmate of Ernie Ball. Crump would later go on to work for Disney as an animator and designed some of Disneyland’s attractions like The Haunted Mansion, Enchanted Tiki Room and It’s a Small World. He also created a number of posters both celebrating and mocking the psychedelic counterculture of the ’60s.

This year, Ernie Ball is also updating their “Back of the Pack” artist roster. Any player who’s picked up a pack of Slinky strings has seen the list of famous guitarists and bands on the back. It’s a nice touch and a bit of inspiration that lets you know you’re part of a huge group of artists that includes some of the best in the game in every genre imaginable. This year, they’ve updated the 162-name list, which now includes newcomers like St. Vincent, Mac DeMarco and Courtney Barnett.

Check out the new list for yourself and keep on your quest for a spot on the back of the pack with a fresh set of Slinky strings!