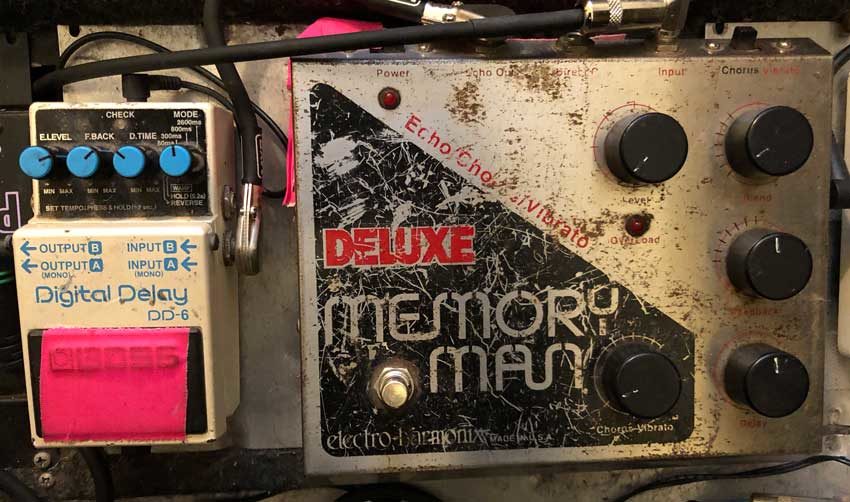 The analog vs. digital delay war has been raging for several years now. Those in the analog camp love the lush repeats and rounded character of the trails. Digital delay folks know that those razor sharp repeats will continue to cut through any mix and keep the true sound of your guitar intact. While volleys may still go back and forth between the groups, I think we can all agree that delay is quite a fun effect to use and, when used wisely, can really fill out your overall guitar sound.

Join me as I dive into digital and analog delay sounds, and offer some ways I would use them to sound my best. What are your preferred methods for using digital and/or analog delays?

To record these sound samples, I used my trusty Boss DD-6 Digital Delay. While the model is discontinued these days, you can achieve pretty much identical results with the Boss DD-7. A Boss DD-6 was used for the digital delay sound samples.

How do digital delays work? I’ll try to explain in the most basic sense. When your analog guitar signal goes into the digital delay, it first hits an analog to digital converter (ADC). Simply put, this converter changes the signal from electrical voltage to digital ones and zeroes. From there, your signal (now ones and zeroes) goes to a computer chip called a digital signal processor (DSP). As you might have guessed, this is where the magic happens. Almost all parameters of the delay, like delay time and feedback settings, are controlled by the DSP. Once the signal has been processed, it goes to another converter, this time the digital to analog converter (DAC). Now, once the signal has been changed back to electrical voltages, the signal is free to go to another pedal or directly into your amp.

Playing a more staccato passage, you can really hear how the digital delay pokes its signal through. Stock digital delays (by this, I’m talking about digital delays that aren’t trying to model analog delays) typically have more of a “mirror-image” type effect. What you put into the delay tends to be what you’ll get out of it, regardless of delay time. If you want that delay to feedback near infinity, the trails will all sound the same as the original signal. This technique sounds great on leads, allowing you to sonically fill out what could otherwise be a thin-sounding lick.

I also have a sample where I played more of a rhythm guitar part. Here, you can hear the digital delay create another syncopated rhythm underneath the primary part. I would use this technique more as a novelty effect to use in certain parts of some songs, but it can become a little more distracting since the digital delays still sound clear and present as they decay. Analog delays affect the guitar’s signal in a much different way than digital delays. First, there are no digital converters since, of course, analog delays have an all-analog pathway. The signal that gets put out is the same signal you put in. After the signal goes into the input, it is split into the “dry” original signal and the “wet” delayed signal. The dry signal goes directly to the output and is heard as your regular guitar signal. Simultaneously, the wet signal goes through what are known as “bucket brigade” capacitors. Here, the wet signal is “held” by cycling through a series of these caps. The rate of your delay is determined buy how fast your wet signal cycles through the series. Fun fact: the bucket brigade name comes from the term for when a long line of stationary people pass items (like water, food, or really anything) from one another down the line.

During the more staccato passage, you can hear the analog delay’s inherent low-pass filter sound. The top end gets smoothed over more and more each delay cycle. As a darker sound compared with the “mirror-image” sound of digital delays, this quirk of the analog delay sound is highly desired. Since it doesn’t do the same “poking through” as a digital delay, analog delays tend to sit back a bit in your guitar’s sound. In a dense full-band mix, analog delays on lead guitars still add meat to your tone, yet the spotlight remains on the original signal.

Listening to the rhythmic part, the darkness of the analog delay allows it to “melt” into the background of the music. Unlike the digital delay, the analog version of this passage has more of a smooth sound that doesn’t seem as if it’s all jumbled together. What sounds more like a pillowy foundation supports the dry rhythm guitar floating over the top.

Modulation is another cool feature of many analog delays. The Memory Man I’m using includes the ability to switch between chorus or vibrato which affect the trails only. For the final sound sample, I mixed in a little bit of the pedal’s built-in chorus. As you can hear, the chorus adds an ethereal layer to the already murky sound. This is a very useful technique for keeping your rhythm parts interesting by adding some movement to your sound.