Overdrive vs. Distortion vs. Fuzz 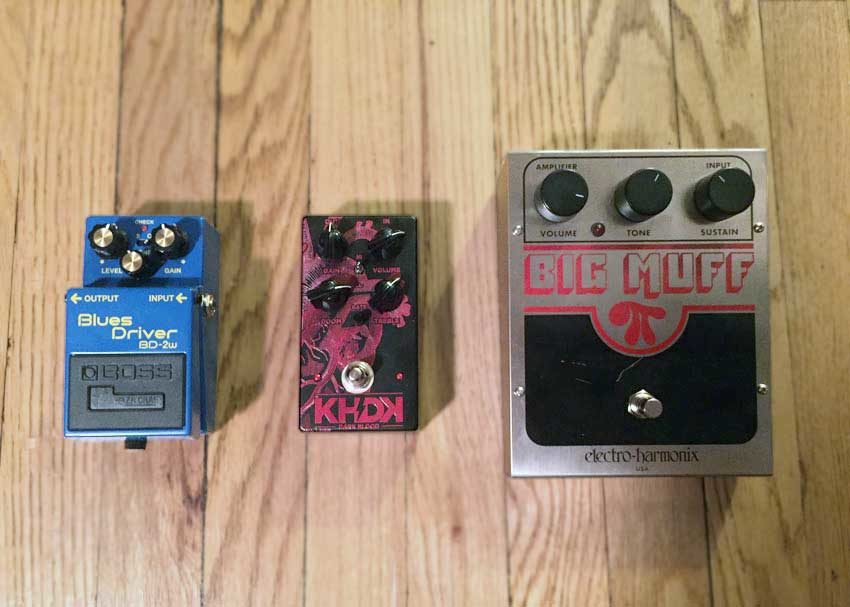 Overdrive. Distortion. Fuzz. We’ve all heard the terms before. But how exactly are they different?

While there are players whouse the words interchangeably, there are distinctive differences between the three types of signal clipping. When I first started playing, the word “distortion” covered the entire gamut of clipping tones. I knew Kurt Cobain used a distortion pedal, and really, that was all the information I needed back then. As I grew older, the nuances between overdrive, distortion, and fuzz became clearer. More importantly, I learned how to effectively use these pedals. But getting to know their subtleties wasn’t fast or easy. YouTube wouldn’t exist for another 10 years or so, and my local music store carried a severely limited selection of effects pedals.

If you’re just starting out, or have limited access to pedals, understanding the differences between overdrive, distortion, and fuzz can seem like a daunting task. With the internet at your fingertips, however, tone quests like this have never been easier. Take a quick look below and explore the differences between these three effects, how each sounds, and how you might use each in the real world.

For the sound clips, I’m using a Gibson Les Paul Standard going into a TC Electronic Ditto X4 looper to ensure the pedals received the same signal. The looper sends the signal into one of the pedals, then to a clean 50-watt Marshall JCM 800 set to humble home studio levels (with the master volume set at the upper edge of the “0”). Out of the amp, I used a Marshall 1×12 cabinet loaded with a Celestion Vintage 30 and miked it with a Shure SM57 slightly off-axis in the middle of the speaker.

Sample effects used are a J. Rockett Archer IKON, a Boss Waza Craft Blues Driver, an MXR Distortion +, a KHDK Dark Blood, an Electro-Harmonix Big Muff, and finally, a ZVEX Fuzz Factory. No EQ or compression was used for these samples, so turn up your volume a bit to get the full sound. 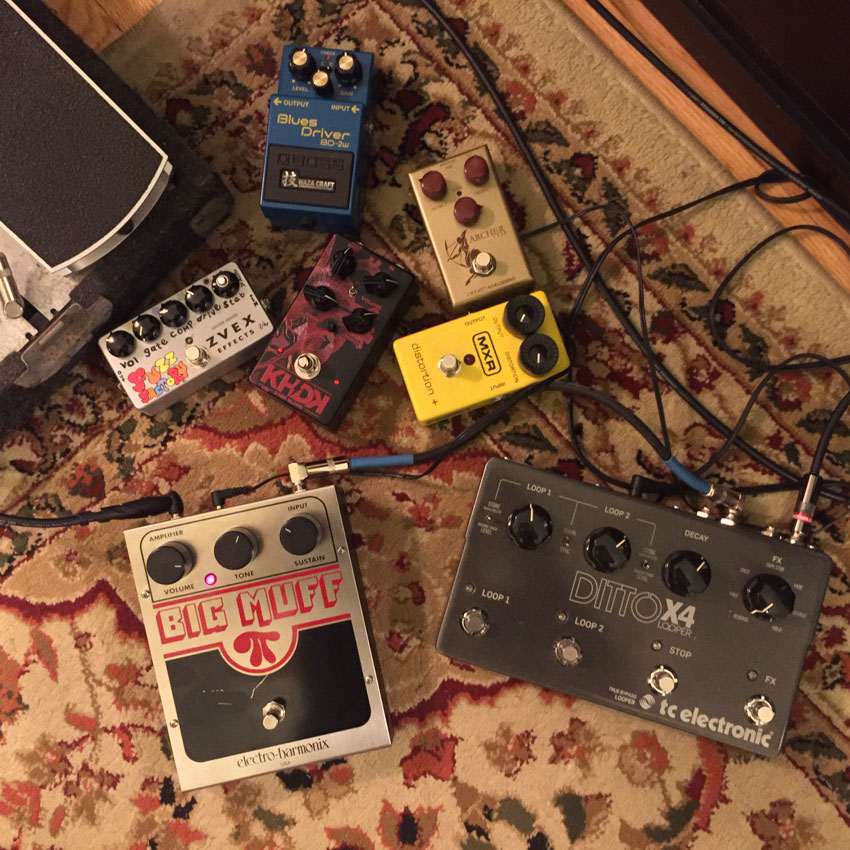 Of all the effects mentioned, overdrive was the first to appear on the scene. Essentially the sound of a tube amp cranked past its clean headroom threshold, overdrive produces the mellowest, most natural clipping of the three. Hallmarks of this effect include a smooth, dynamic sound that cleans up with a softer touch. Digging into your guitar rewards you with even more gain. After learning how to play around with this dynamic, a wide range of tonal options will appear, depending on how hard you play.

Since overdrive pedals mimic how real amps react to your playing, they represent excellent candidates for your foundation tone. Just use the overdrive on a clean amp, and try placing the overdrive last in your signal chain. Since all your other pedals feed into the overdrive, it will react and sound very similarly to the natural overdrive of an amp.

The J. Rockett Archer IKON has a nice transparency to its tone that is really hard to beat. Its one of those pedals that, in my opinion, could very well be an “always on” effect.

Switched into “Custom” mode, the Boss Waza Craft Blues Driver produces a crispy yet fat overdrive sound. A bump in the lower mids also adds some fullness and color to the tone, perfect for giving your sound an edge while playing with a full band.

In my opinion, distortion bridges the gap between overdrive and fuzz. Where overdrive is natural-sounding and fuzz has a tendency to be quite over-the-top, distortion captures a little from each to sound distinct from the other two. Think of distortion as a hyped tube amp that goes to 11. The bass tends to fall on the bold side, the mids sounds a bit scooped, and the high end can get downright nasty if left uncontrolled. Many players use distortion boxes as their foundation tone, especially guitarists playing heavier, more aggressive stuff. I use distortion as a special effect to highlight heavier parts of songs that need a little more oomph to send the right message. Just experiment with the effect and see how it works for you!

The MXR Distortion+ almost sounds to me like a really high-gain overdrive. Even though it can get really distorted, the tone produced sounds pretty transparent. Bass or mid levels remain un-hyped, but high end sounds boosted just a touch. The ratty, vintage tone that this box produces remains highly prized and works especially well for 70s-80s metal and hard rock.

The KHDK Dark Blood stays especially true to its name: this thing can get dark. Luckily, a twist of the treble knob adds a sheen of sparkly high end that sounds especially great. Quite the opposite of transparent, the Dark Blood floods your signal with enhanced lows and mids, creating a full-bodied tone that will make thrash and doom players alike bang their heads in approval.

The most extreme of clipping effects, fuzz is your go-to effect for squeezing every last nuance out of your signal. Fuzz pedals are notable for their extreme compression and gain. Playing your guitar softer won’t really clean up your signal, and playing harder only causes more compression, warping your tone even further. Due to the massive amount of squish put on your signal, expect hyped lows and highs. The extreme compression also makes fuzzes a favorite effect for leads, creating a long sustain that lets your notes sing for as long as needed.

Many fuzzes are also notorious for scooping out a healthy portion of your midrange. This poses a problem when engaging the effect while playing with a full band and it can suddenly sound like your volume went from 10 to 1. If your fuzz reacts this way, just set your amp with some bumped mids and continue to rock out.

Possibly the most ubiquitous fuzz pedal in existence, the Electro-Harmonix Big Muff is a good starting point for many players. The gigantic enclosure alludes to the fatness the effect produces, bumping the lows for an objectively full tone. The mids do tend to get scooped a bit on Big Muffs, but cranking the mids on your amp should rectify the situation. Stomp on the Big Muff whenever you need to sound huge.

Finally, the ZVEX Fuzz Factory produces what I can only call a gnarly tone. When you really need that dying amp or speaker tone, this is the pedal to use. The incredible amount of compression from this pedal can be tamed with the Comp knob, but rolling back the guitar’s volume actually helps keep your tone from becoming totally mangled. For the sake of limiting variables, I kept my guitar’s volume on 10 for this sample (staying true to how I demoed the other pedals), resulting in an absolutely crushed sound. This pedal suits leads favorably, but rolling back the volume when playing chords will create a much more manageable tone.

So there you go folks. As always, experimentation is always recommended. Whatever works for me might not necessarily work for you. Twist some knobs, find your own voice, and bask in the wonderful glory of loud, distorted electric guitars.