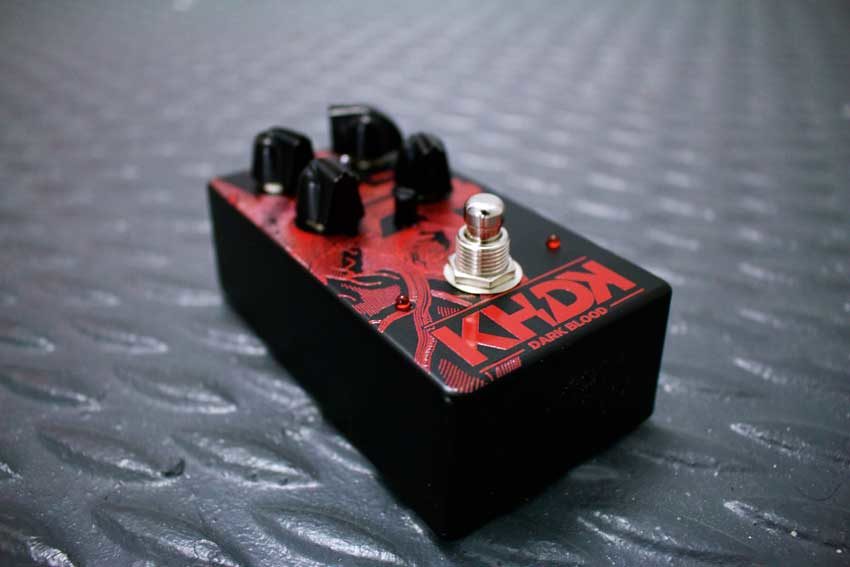 There’s almost nothing like plugging into a big tube amp, cranking the volume, setting the gain just right, and letting that thing rip. It’s that x-factor, the “you know it when you hear it” sound, that keeps you coming back for more. There’s something going on among the combination of tubes, capacitors, resistors, transformers, etc. that makes the sound of the electric guitar so addicting. It also happens to be that certain special something that pedal manufacturers have been trying to recreate in overdrive/distortion stompboxes for decades. With KHDK’s Dark Blood distortion, we just might have found a contender for life-like tube tone.

Right off the bat without even plugging this bad boy in, you can feel the high quality with which KHDK Audio has crafted the Dark Blood. The box itself seems like it will last a lifetime, while the chicken head knobs are a nice touch. After putting this pedal through its paces, I can assure you that the build quality certainly complements how good the Dark Blood actually sounds. 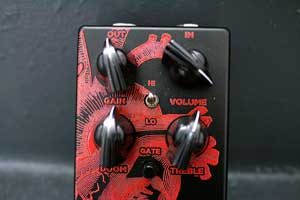 Going through the controls, the Dark Blood includes the standard Volume and Gain knobs, along with a few others that aren’t so straightforward. The Doom knob controls how much low end gets sent to the distortion circuit. Turning the control all the way counter-clockwise substantially trims the bass, resulting in much more control of the lows for tight palm mutes. Gradually turning the knob clockwise inserts more bass into the circuit, emphasizing the low-end girth of regular 6-string guitars, while perfectly complementing extended range axes with 7-, 8-, or 9-strings. The Treble control essentially acts as a low-pass filter, capable of producing quite subdued tones even with cranked gain. We found this control extremely useful when trying to get more stoner rock and doom metal tones.

Get The Tone: Doom Metal

The Hi/Lo switch adjusts the overall gain ceiling of the pedal, with Lo corresponding to slightly lower gain than you’ll get in Hi mode. Finally, a Gate knob is included to dial in just the right amount of noise reduction. This gate won’t close the signal completely, but it does an incredible job at keeping extraneous electrical buzzing and hissing to a minimum, even when the pedal’s gain is cranked and your amp is dialed to the “ear-bleeding” setting. The only time we felt we needed to dial back the gate was during passages with long note sustains — the signal would seem to quickly get quieter when the gate was cranked, but decayed naturally when the gate was turned down a bit.

I had the opportunity to sit down with the Dark Blood, and my friend/zZounds Customer Service Representative Tony Defillippis joined in on the action. We took the Dark Blood through its paces with a few different amps. First, we used Tony’s trusty 2016 Gibson Les Paul ’50s Tribute T through the Dark Blood and into his Vox AC30. We also had an Orange Dark Terror paired with an Orange PPC 1X12 speaker cabinet hanging around that we also used for a bit.

Going into the AC30, we first tried the Hi setting with the Gain, Doom, and Treble knobs all at noon, with the Volume set around 2 to 3 o’clock just to match the dry output level. The bass remained pretty tight despite the amount of gain this little pedal was pushing. The flurries of palm mutes never sounded like they were flubbing out. There does seem to be an added sizzle in the higher mids while in the Hi setting, which is perfect for cutting through a band mix, even with some mids turned down on your amp. You can get that ultimate “metal scooped” sound without getting buried by the other instruments.

Moving along, we tried the exact same control knob positions, but this time switching down to the Lo setting. The first thing you’ll notice is that the output drops a little bit when compared to the Hi setting, but of course this is easily rectified with a turn of the Volume knob. The Lo setting boasts a smoother, amp-like overdrive that can get pretty hairy, but is easily kept in control. The bass response wasn’t as strong as on the Hi setting, but the mids remained smooth with a delicate top end. The Lo setting is what I would consider my default position, but the Hi setting remains highly useful, especially for players needing a smooth lead tone, or those who crave as much gain as possible.

The Mellow demo was created by using the Les Paul’s neck pickup going through the Dark Blood in the Lo setting, with the Gain turned all the way down, Doom at 2 o’clock, and Treble at 10 o’clock. We were able to achieve an almost Velcro-like texture that would be perfect for any stoner rock project. Turning the Treble down ever so slightly took quite an edge off the overall tone — keeping it subdued without entirely restraining the distortion. This gave us a a wooly tone that could be tweaked and used for a variety of rock styles. 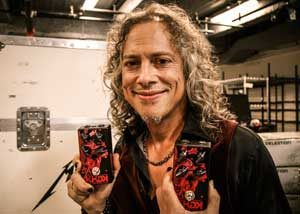 Kirk Hammett showing off a few of his friends.

Finally, we took the Dark Blood through a few more aggressive settings. The Punk riff was created with Gain almost turned down all the way at 8 o’clock, Doom at 3 o’clock, and Treble at 2 o’clock. Through the AC30, the Dark Blood produces a very generous midrange which is really accented with this setting. Despite the low gain (and being switched to the Lo setting), the Dark Blood still pounds out enough distortion to to live up to its name.

The Thrash riff was played through the Orange Tiny stack, and only required a few changes from the previous setting. The Gain was cranked to about 2 o’clock, Doom turned down to 2 o’clock, and Treble turned up to 3 o’clock. Turning up the gain made the tone substantially angrier, but turning up the Treble really brought out the sleaze that I’ve been waiting to hear out of this pedal. Rolling off the mids a touch during post-EQ would really transform this tone into that undeniably awesome early ’80s “metal scoop.”

Overall, the KHDK Dark Blood does a fantastic job simulating genuine tube amp tone. Rolling down the volume on your guitar really cleans the pedal up without sacrificing too much sparkle on your high end. The tone stays tight with just the right amount of sponginess, and there’s enough gain on tap to satisfy most styles of heavy rock. The Volume control also has a ton of power behind it, so feel free to crank that to hit the front end of your tube amp for even more gain. If you’re searching for a suitable amp-in-a-box for your heavier projects, the KHDK Dark Blood just might be what you are looking for.