Legends of Tone: Brian May

If you know much about Brian May, you know that he may just be the most interesting man in the world. Not only is he the legendary guitarist of the world-renowned rock band Queen, he’s also a doctor of astrophysics, and he owns a company that specializes in 3D stereoscopic imaging, a lifelong fascination of his. May even was appointed “Commander of the Most Excellent Order of the British Empire” from the Queen (the actual one). On top of that, he continues to be an outspoken critic of the practices of fox hunting, badger culling, and trophy hunting. It doesn’t stop there: in 1991, Queen’s iconic frontman Freddie Mercury tragically died from AIDS and inspired May, drummer Roger Taylor, and their manager Jim Beach to establish The Mercury Phoenix Trust. They regularly fund grassroots organizations that get overlooked by larger charities and strive to combat AIDS through knowledge of the disease. See what I mean?

Obviously May is quite the philanthropist, but where does the whole famous rockstar thing come in? Well, to find out, we need to look at a lesser known earlier band of May’s: Smile. Smile was formed in 1968 while May was attending the Imperial College for astronomy. Allegedly, he put out a listing for a “Ginger Baker type drummer” which was eventually picked up by Roger Taylor, the future drummer for Queen. After he joined Smile, they played locally around the college campus for a few years, even opening for just-rising band Pink Floyd in 1968. During that time, Smile would draw the attention of a very important fan: Freddie Mercury. Over the next few years, Smile and Mercury would each attempt success with their own musical projects until the timing allowed for the new group to form. When then-singer/bassist Tim Staffell left the band, Mercury joined on, with bassist John Deacon finally rounding out what would eventually be known as Queen. The rest is history.

The real story of Brian May really isn’t complete without mention of his famed guitar, the “Red Special.” Sometimes dubbed the “Fireplace” or the “Old Lady”, it was a signature staple of Brian May’s rig and became a personal trademark on and off stage. No other single guitar is surrounded by as much lore and legend as the Red Special. Built by May and his father, Red Special was constructed with unorthodox but practical parts that were available to him and his family at the time. This gave it a highly original sound and feel that only a homemade guitar could provide. May playing the famed Red Special

The guitar itself is rather unique: a body of oak taken from an old table, and an oak neck made from a “hundred-year-old-ish fireplace mantle” — hence the guitar’s nickname “The Fireplace.” Oak is in fact a very heavy wood and one not often used for making guitars, but May and his father quickly realized there was something special about the guitar and its resonant sound. In fact, it was actually a semi-hollow construction with no f-holes because they didn’t get around to adding them in.

Once the guitar itself was constructed, it was then equipped with a set of three Burns Tri-Sonic pickups. May has often attributed the Red Special’s vocal quality to these pickups.

If only one piece of gear represented the Brian May sound, it would certainly be this guitar. For us lay folk however, the Red Special is out of reach. If you want to get closer to his tone, naturally you should go for his classic amp: the Vox AC30. 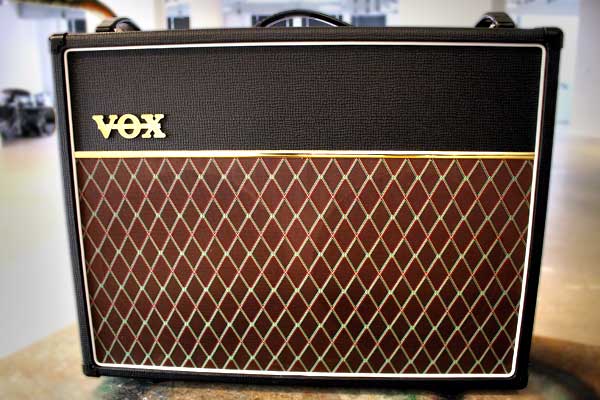 One of the single most recognizable amps ever, the AC30 is a staple piece of equipment you can find nearly anywhere. Used by the Beatles, The Rolling Stones, Eric Clapton, John Scofield, Radiohead, Jeff Beck and a million others, it has endured the test of time with ease. May has used Vox amps exclusively for decades, which speaks volumes as to how important they are to his tone. The AC30 is known for its super-articulate clean tones along with a rather unique overdriven sound. May would almost exclusively run his Vox amps completely dimed in order to capitalize upon the overdriven tone, and would often add grit and color from his use of various treble boosters. May likes to do what I call “playing the amp,” or turning the amp up until it reaches the overdrive amount you want, and then adjusting your guitar’s volume knob up and down when more or less drive is needed. Simple.

An interesting tidbit you may not have known is that Brian has all of his AC30’s modified so that just the Normal channel remains. A single Volume knob controls this channel only. Essentially all other components of the other channels are removed. According to his long-running tech Pete Malandrone, everything inside is point-to-point wired for the highest reliability possible. Additionally, May’s amp tech, Mike Hill, states that all of the amps have the standard GZ34 rectifier tube replaced with a solid-state rectifier to make the amps even more fail-safe. While these custom mods work for May, you can still always use a modern AC30 loaded with Celestion Alnico Blue speakers. Just plug into the Normal channel and turn it all the way up to get a pretty true approximation of the tone. 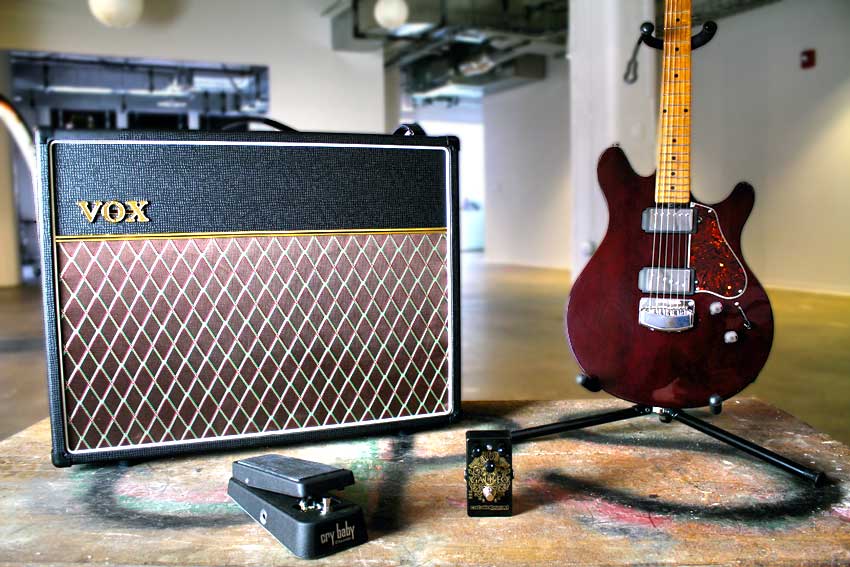 Our Brian May Rig 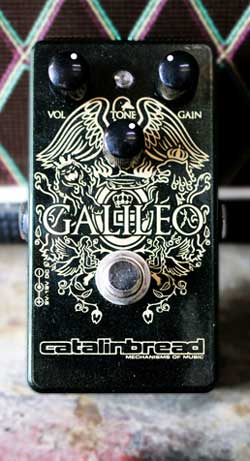 For our demo, we used a stock Vox AC30C2 amplifier for all guitar tracks. But in order to truly replicate the sound of Brian’s rig, we needed one more key piece of gear: a treble booster. We were curious about how Catalinbread’s Galileo pedal would perform and decided to use it with our AC30. With a name and artwork that screams Queen to any fan, the Galileo pedal is a clone of an AC30 being hit with a Dallas Rangemaster treble booster. Catalinbread designed the pedal with Brian May’s preferred usage of his amps in mind – with your guitar’s volume full up, the pedal accesses quite a lot of gain and bite, but if your guitar’s volume is dialed back, it cleans up to a sweeter tone with less gain and a healthy dose of clarity. We experimented with this effect during various sections of our video to demonstrate the pedal (and amp’s) range of tones. All in all, the pedal was a great addition to our rig for achieving May’s tone. Don’t let us paint this pedal into a corner though – it works well with plenty of other tube amps and setups too.

With the amp and pedal figured out, we had a little bit of a problem: the guitar. Obviously we couldn’t get the actual Red Special here, but we did have a guitar that fit the bill aesthetically and tonally: The Ernie Ball Music Man James Valentine. Now I know what you may be thinking – that’s an odd choice – but it ended up working quite well for our purposes. The guitar has a slyly hidden single-coil bridge pickup housed in a humbucker-sized enclosure. Paired with the AC30 and Galileo, it had more than enough bite for us to get a good Queen guitar sound. It’s a simple rig when you get down to it – but as I’m sure May’s engineer would agree, simple is best. 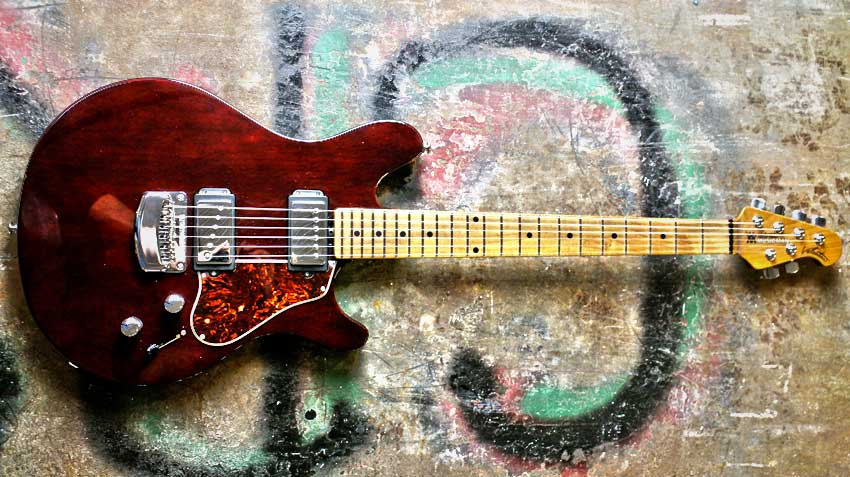 When we got to work arranging and tracking the guitar parts, I realized I’d need to figure out a couple stylistic tricks that May loved to use. In particular, I needed to nail those thick-layered guitar harmonies and melodies. The key was in how he stacks his harmonies up, sometimes creating clustered chord voicings and other times using only simple octave harmonies to get his point across. May’s knowledge of the appropriate usage for the huge layers of harmonies came in handy while writing guitar parts alongside the likes of Mercury and the rest of the band. My favorite technique May utilizes is called a Bell Chord, often referred to as a cascade. Often employed in big band horn arrangements and barbershop groups, it is simply a chord that is arpeggiated and staggered between instruments creating the famous “cascade” sound. May’s guitar lines would often exploit this effect, creating interesting guitar textures that were not often heard in rock. 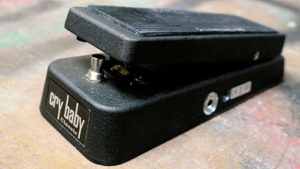 More important than even his harmonies though, were the interesting usage of timbres to create unique harmonic effects. For instance, entire guitar harmonies would oftentimes be recorded with a wah pedal left in a fixed position for extra bright and over-the-top filtered musical textures. Sometimes, people mistake those guitar parts for trumpets or trombones. Combining this approach with Freddie Mercury’s playfully written music was part of the recipe for Queen’s unprecedented success.

As an added bonus, I arranged the famous “Bohemian Rhapsody” vocal section entirely for electric guitar using the Brian May tone. While listening, take notice of how cleverly Queen put together those giant walls of harmonies. I also spent some time listening to the original song and mapping out precisely how the vocals were panned for each part and we then mixed ours accordingly. It’s basically a crash course on multi-layer harmonies and panning tricks — check out our video at the top of this page to hear how it sounded!

Brian May’s homemade Red Special guitar does contribute a ton to his playing style too. Because of its shorter-than-usual scale length of 24,” (Gibson is 24.75”, Fender 25.5”) the guitar has a looser string tension and feel. That allows him to bend notes, even wider ones, much easier. The lower tension likely explains why his vibrato technique is so aggressive too — If you’ve ever played on a friend’s high-gain amp rig and just wanted to shred licks instead of playing anything musical, you know what it must be like for Brian May playing his looser feel guitar – nice wide vibrato and lots of bends. Though it may take a bit of extra effort to get the vibrato so smooth on a normal tension guitar, it’s worth it. Make sure the vibrato speed is fast and wide (even while bending!) and it’ll make a subtle, but noticeable difference in sounding more like May. Crank up an amp and give it a go. You’re welcome. These days, May is still keeping plenty busy. In 2007, after a nearly 30-year break, Brian finally received his Ph.D in Astrophysics from Imperial College in London. In July of 2015 he was even able to work with NASA as a scientific collaborator for the New Horizons probe that went to Pluto. His love of stereoscopic imaging surely came in handy when they were working to compile the first real photos of the planet – what an opportunity! Besides this, he is still involved in myriad humanitarian efforts and continues to actively donate and lend his support. For all the fans out there who want a chance to catch May live and in his element, you can see him performing later this year with Queen + Adam Lambert on their 2017 tour.