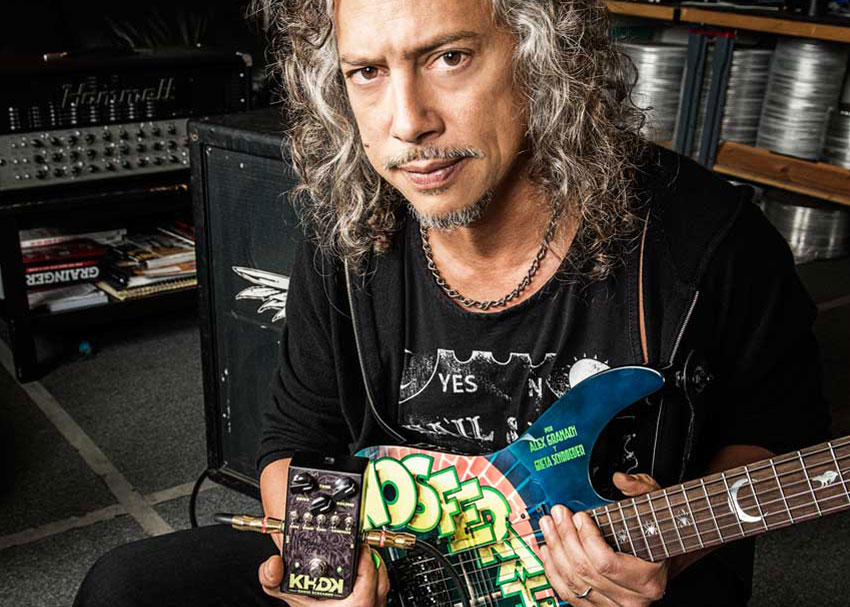 When a guitarist carries as much esteem as Metallica’s Kirk Hammett, you’d think they would be content sticking to the signature tone they developed years ago. But, just like us lowly mortals, the guitar god still tweaks and adjusts to his tastes, forever chasing the sounds he has in his head. And to that end, what better way to completely and accurately express yourself than by creating your own effects pedal company? With the introduction of KHDK Electronics, established by Hammett with his old friend and music industry veteran David Karon (with the founders’ initials, KH and DK, forming the name of the company), Kirk has been able to tailor the circuits of his vintage go-to effects to suit his own personal tastes. What’s more, he’s creating something unique to be enjoyed by guitarists of all genres — not only metalheads.

Recently, we were fortunate enough to chat with Kirk about KHDK, and ended up gaining a whole lot of insight into his creative vision, the versatility of his pedals, and his hopes for KHDK’s legacy.

“I put out a pedal company mainly because I just wanted to make stuff that I wanted to make, you know? I wanted to also just expand upon other stuff — time-honored stuff — that I’ve been using for years and years,” Kirk Hammett explains about the genesis of KHDK Electronics.

What started as just a simple conversation between two friends, KHDK has now become a full-fledged reality.

“It started really as just an idea one night,” he explained. “Dave and I were having a conversation somewhere on tour, and he said ‘You know, we should start a pedal company.’ And I said, ‘You know what? Great idea.'” 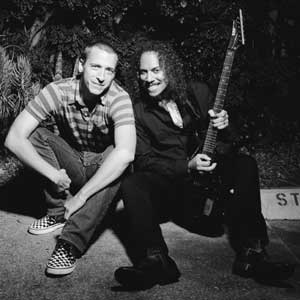 The vision of KHDK is a relatively simple one: opening up the possibilities of great vintage effects and tweaking circuits here and there to ultimately create unique pieces of gear with unmistakable tones.

“My main intention was to just hot-rod a Tube Screamer and it just went from there,” Hammett said.

He went on further, divulging to us a mysterious stompbox he found on tour: “There’s also this real distinct distortion box that I had bought somewhere in Europe, I don’t know, maybe 15-20 years ago, and I’d never seen anything like it before or since.”

“And I said to Dave, ‘Dave! See this thing? Listen to it. We gotta base all our distortion boxes on this particular pedal. But we also gotta open it up and add to it, to augment it, just tweak it so that it’s not a copy, but its own, standalone thing,’ he explained. “That’s what we started doing and that kind of leads us up to this point.”

Manufactured inside a family-owned factory in Paducah, KY, KHDK’s current lineup includes three pedals: the No. 1 Overdrive, the No. 2 Clean Boost, and the Ghoul Screamer Overdrive. The No. 1 delivers an organic, tube-like overdrive that is powered by their own unique, proprietary circuit. There’s a Hi/Lo switch that’s tied directly to the gain, offering different levels of gain structure and compression. The No. 2 boasts a clean boost moniker, but is also capable of coloring your tone with some on-board dirt to maximize the harmonic content of your favorite tube amp, and also includes a similar Hi/Lo switch. These first two pedals also offer a distinct feature: a bass control that not only affects the low end of your signal, but is also tied directly to the gain stage of the pedal, offering even more bass and low-mid saturation.

“Well you know that’s something our engineer Antonin [Salva, KHDK’s chief engineer] came up with — a brilliant idea,” Hammett said regarding the Bass knob gain feature.

Hammett went on to praise his engineer further, stating, “Antonin’s our nuts-and-bolts guy, the soldering guy — he’s the guy who puts it all together and finds what works and what doesn’t,” before joking, “I can’t claim being a part of any of that stuff. I’m just the guy who plugs it in!”

The third pedal in KHDK’s line, the Ghoul Screamer Overdrive, boasts the most versatility of the three. Besides the standard Drive, Tone, and Volume knobs, this compact pedal also features five switches to further tailor the tone to your tastes. The Bass switch enhances the low end, the Highs switch expands the upper limit of the tone pot for enhanced brilliance, and the Body switch gives your tone some resonance for a punchy, tight midrange. The Ghoul Screamer also includes two Compression switches from which to choose three separate compression settings. Having such a versatile pedal in the line was significant for Hammett.

“Well, I’m primarily known as a metal guy, but when I’m sitting around at home playing guitar, I’m totally playing jazz, blues, bossa nova, ’70s rock, ’80s NWOBHM. I don’t stick to any one genre when I’m playing my guitar, and I don’t think that’s something a lot of people realize about me,” he said. “It was important for me for the Ghoul Screamer to be able to accommodate a guitar player who wants to just jump back and forth through all those styles.”

So then, what kind of guitarists are being targeted by KHDK?

“We’re trying to put these [pedals] in as many guitar players’ hands as possible,” Hammett said. “I just got a copy of the new Gojira album and I’m very psyched to hear that, because they are using a couple of our pedals on the album. 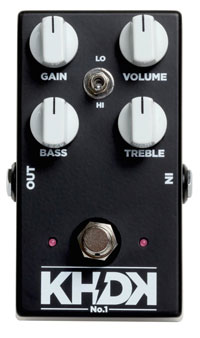 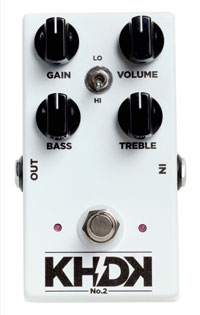 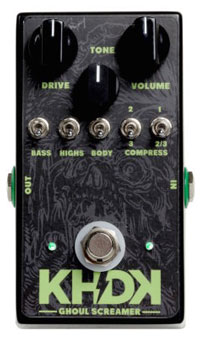 And Hammett truly does see KHDK pedals as tools for any guitarist. In fact, he recently sent some KHDK pedals to Davey Johnstone, best known as the guitarist for Elton John.

“He’s not a metal guy, and he loves ’em,” Hammett happily reported. “He’s not in a metal band, obviously, and he’s not playing metal songs but he totally told me how much he thought they were really great. That’s a really good example of someone other than people in the hard rock/heavy metal world using this stuff.”

With three solid pedals under their belt, what lies in the future for KHDK?

On the near horizon for KHDK is the release of the Scuzz Box Fuzz pedal, building upon the tonal foundation of vintage fuzzes that Kirk loves to hear.

“I’ve always liked that sound because of my love for ’60s-’70s bands and that kind of fuzzed-out sound,” Hammett said. “It’s always been really, really cool to me.”

In fact, Hammett admitted that the first thing he plays on his Scuzz at home is the riff to “What is Life” by George Harrison.

“That’s what I play, bro. Over and over again. And also ‘Touch Me I’m Sick’ by Mudhoney.” 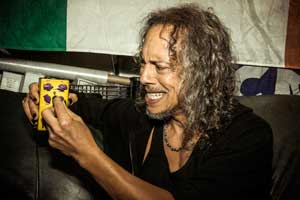 Kirk has some fun with the Scuzz Box.

Throughout our conversation, Kirk repeatedly expressed his joy over what KHDK has already accomplished.

“I have to say, it’s been amazingly satisfying to me. I didn’t think that I would have as much fun with it as I’m having,” he said.

Regarding the pedals themselves, Hammett humbly, yet proudly remarked:

“It’s really been quite a surprise for both Dave and I on how well everything is turning out, how they’re sounding. I’m really, really happy with that. I was of the idea that if we made a good product, sooner or later someone will take notice and see that it’s not just something with my name, my initials on it, that it’s actually some decent stuff.”

Hammett said he wants KHDK to become known for their pedals’ unique sound, similar to how the musical world changed when the wah was first introduced.

“When the wah pedal came out, it was like ‘Hey, this is pretty good!’ [imitates sound of a wah] Wacka wacka wacka wacka. ‘Hey I like that!’ Wacka wacka wacka. Today in the studio, I was like wacka wacka wacka. I’m hoping we’ll make something cool — that someone will discover a cool thing that’s totally unique, and then you go and start wacka-ing,” he said. “That’s ultimately what I would like: that one of our pedals created a really cool, unique sound — something that everyone else started to know.” 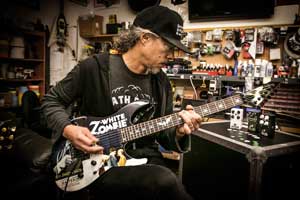 Kirk plays with the current lineup of KHDK pedals.

“The thing with tone — it feels like a chase — a continuous chase, or tone chasing you,” he proposes, speaking with a type of confidence that’s associated only with experience. “I tweak it a little bit here. And then I think, ‘was my tone better a year and a half ago?’ And then I’m thinking about it all — how is my tone now different than a year and a half ago? Then I’m on a different chase.”

We concur with Kirk, knowing full well that the thrill of the chase is almost as exciting as the prize itself. So, pick up a a KHDK pedal for yourself and experience the satisfying chase for tone that these wonderful pedals have to offer. With such a diverse scope of excellent sounds, you might not have to chase too long to find what you’re looking for.