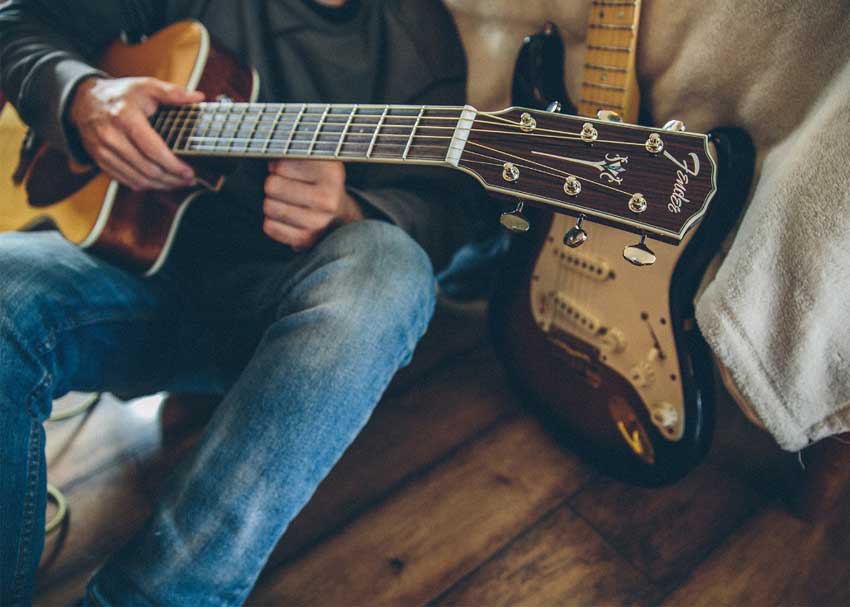 Billy Martinez, Vice President and Category Manager of Fender’s Acoustic Guitars Division, is on a mission. Data suggests that just 10 percent of people who purchase a guitar as a new player will stick with the instrument. Martinez not only wants more players to stick with guitar, but with Fender guitars.

To do so, he thought players needed a series of models that could carry the torch after they were ready to graduate from the Classic Design and California Series. He found the opportunity in a new line that started development shortly before he was hired by Fender in February: The Paramount Series.

The Paramount Series currently includes triple-0, parlor and dreadnought body shapes, with deluxe (rosewood back and sides) and standard (mahogany back and sides) variations of each. There are also limited-run Adirondack spruce and all-mahogany models available. Each Paramount acoustic features all solid wood construction, scalloped “X” bracing and vintage aesthetics, like checkerboard purfling and open-gear tuners. 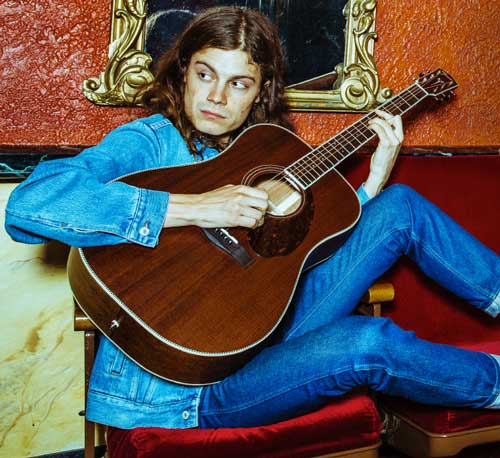 Garrett Borns of BØRNS, tries out a Fender Paramount backstage.

“My team is not just ‘hey, point [and] click on a menu of options from a factory,'” Martinez said. “I’ve got three engineers that do nothing but CAD drawings and body designing and bracing patterns.”

Artists are helping showcase the Paramount lineup as a new venture from Fender that is definitely pro-worthy. From Brad Shultz of Cage The Elephant taking his Paramount crowdsurfing at a festival set to Brad Paisley performing on a Paramount then signing it and offering it to a fan, there’s been a full-court press of artists coming out to support the new line.

“The idea with Paramount is it’s for a little bit more of an advanced player who understands why you’re spending $800 to $1,000 on a guitar that’s all-solid; what the tonal differences are that you achieve vs just a solid top with a laminated back and sides, or an all-laminate guitar,” Martinez said. “That person is definitely more educated; they know a little bit more about what they’re looking for out of the body shapes and they know what kind of neck profile feels good to them as a player.”

And while Fender hopes to break new ground with Paramount, they’re bringing their other acoustic series up for a refresh as well. Earlier this year, Fender introduced the revamped line of T-Bucket acoustic-electric guitars. With standout features like a mustache-style bridge, open-gear tuners and new rosette and fretboard inlay patterns, the T-Bucket is set to be one of the most versatile and best-looking in the family.

At the entry-level end, Fender will also roll out updated models in its incredibly popular Classic Design series, though details were scarce at the time of interview.

“Part of what my team is doing when we design guitars is [to think] what are our Fender customers telling us that they want?” Martinez explained. “And then how do we take all of the expertise that we have and how do we blend those two in order to give customers exactly what they’re looking for and then keep them in our brand?”

Acoustic guitars is a division in which Fender sees a lot of potential for another one of its goals: reaching more female guitarists. Take a look at Fender’s website or its videos and you’ll see females well-represented. And it goes way beyond just still photos — Fender features female product demonstrators in its videos and has showcased female-fronted bands like Bully, Best Coast and Warpaint in its campaigns.

“It’s just a good position to take, and [it’s] inclusive of a bigger community than the industry has addressed in the past,” Jonathan Forstot, Director of Marketing for Fender Acoustics, said.

And while it’s not necessarily breaking ground for a company to target female guitarists, Martinez and Forstot have been wary to avoid the missteps that many companies make in doing so. For Fender, it’s more than just making a smaller, pink version of a popular guitar. It’s about educating customers on the various acoustic and electric guitar body shapes, letting them read the specs and hear the differences through videos, so they can decide for themselves.

“Let’s just give the right guitar to the right person and have that option for our customers,” Martinez said.

Shopping for a guitar is an opportunity to learn, and that’s especially true today when videos and other online resources are plentiful. Of course, while it’s common to find a torrent of spec sheets and comparison videos when shopping for a mid- to high-end guitar, Martinez wants to give customers just as much access to information when shopping for their first guitar.

“While people think most of the time a $199 guitar is an impulse buy or a commodity, the thing for me is in order for us to keep people within the brand, if we say that only 10 percent stick with playing guitar I’m OK if we gain another 10 percent just by educating them and giving them the guitar that we know they’re asking for,” Martinez said.