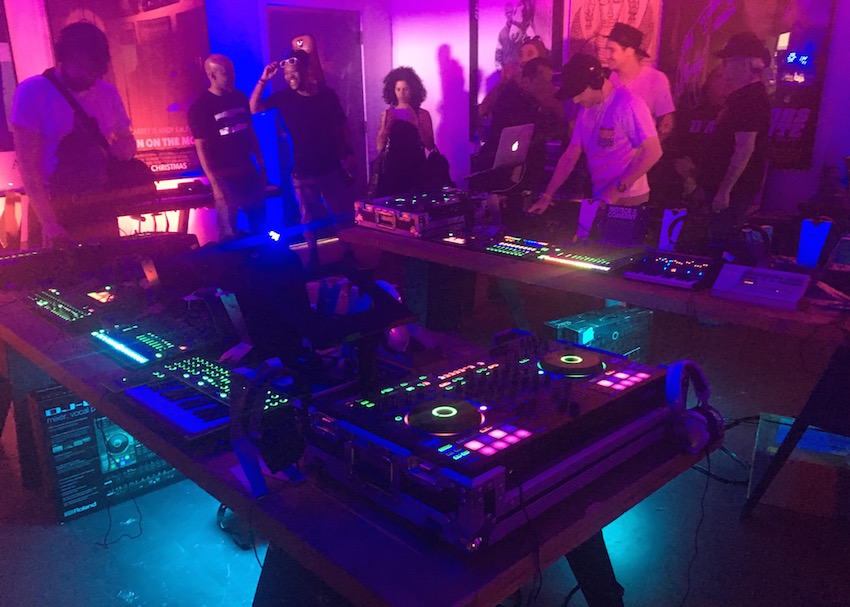 At their The Future Redefined event, nicknamed “909 Day,” Roland is rolling out a slew of new gear — and they’re also introducing a new way to launch products, breaking the mold of the traditional tradeshow approach. Backstage at Studio Six01 in Burbank, California, just before the Los Angeles leg of 909 Day kicked off, we sat down with Roland’s VP of sales Brian Alli to get his inside scoop on some of the brand-new Roland gear we’ll be seeing and hearing — as well as his perspective on what went into putting on this “online music festival.”

zZounds: What is 909 Day, and how did Roland get the idea for this event?

Brian: So, the Future Redefined is an event that Roland is putting on worldwide. It actually starts in New Zealand, then Tokyo, and it works its way across the globe until it hits L.A., right here at Studio Six01.

This studio — they’re great partners to the Roland Corporation. We met about a year ago and put on an event together called 808 Day, where we were celebrating some products, and also just celebrating musicians; the culture, the scene. We had a live performance from David J and the Gentleman Thieves, and we had an art exhibit. That event was loosely advertised in a couple of email blasts, and we weren’t really sure what to expect…we were kind of doing it for ourselves. But, much to our surprise, we had a tremendous turnout, and so many people watching online, and so many inquiries afterwards.

The things that were really popular that night weren’t just the great music we had. We had what we call a “petting zoo,” where we had all the new products laid out, so everybody attending could go in and try them out. It got so popular, that it kind of took over the night. Everybody walked away having had a great time — and we were wondering, “How do we top this?”

This year, the Roland company decided we don’t need to follow trends of the industry.

Well, this year, the Roland company decided we don’t need to follow trends of the industry. In the industry, most companies launch products in January, at a tradeshow. They bring product to a convention center, and launch the product to buyers from all the music retailers. It’s an amazing event, and it’s wonderful to experience, and we all go — but we’re launching with a thousand other companies. 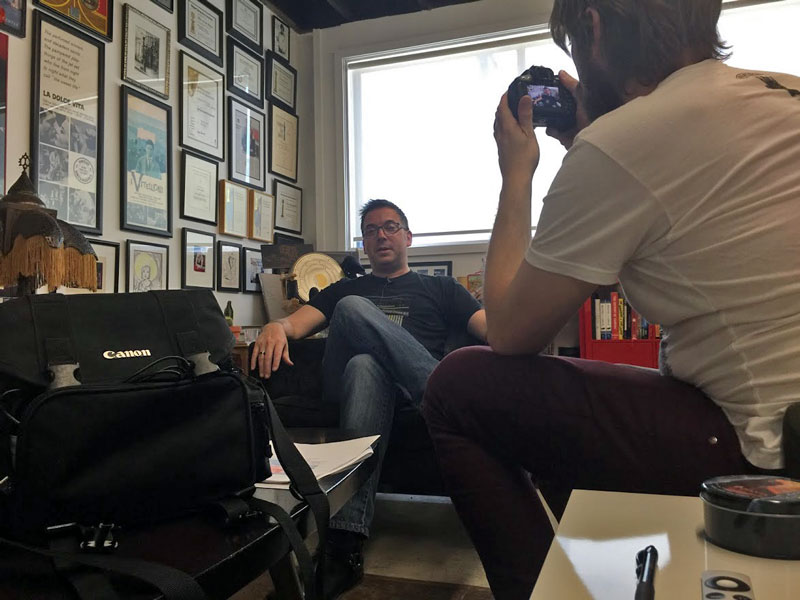 Filming our interview with Brian Alli in Studio Six01.

We thought, “What would happen if we could be a little different, and take a whole bunch of products and launch them by ourselves?” Traditionally, when you do that, you don’t get much press; you don’t get much success. And you wait until the NAMM Show for everybody to learn about it.

So for the last year, we’ve been working with some of the greatest producers and promoters in the entertainment business, who actually work out of this building [Six01], and said, “Help us! Help us change the way that this happens.” So these folks, along with many of our counterparts around the globe working with their local communities, have created this online music festival, which we named The Future Redefined. We’re encouraging everybody to unleash their creativity and join us on this “909 Day” — of course, “909” paying respect to the Roland TR-909 drum machine, that we’re reissuing in the form of the new TR-09.

So what you’re going to see is 22+ bands performing all genres of music. There’ll be DJs, there’ll be solo piano artists, there’s tons of rock bands playing, and nearly 1000 people in attendance. This time, it’s not public — this is all VIP artists, producers, musicians, there’s some pro athletes coming; you name it, they’re going to be here. And they’re all coming out to experience great music, check out some great products, and enjoy the moment of celebrating the culture that is music.

zZounds: What are some of the new Roland and Boss products we’ll see on 909 Day?

Brian: Anybody walking in the door or watching us online is going to see answers to the questions that we’ve received from thousands of fans — or one-time fans who are looking to come back to Roland and Boss — and also some new solutions.

The Boutique synthesizers that we launched last year were wildly successful. But there were a couple pieces that people wished we’d done, and we didn’t. So, we’ll have some new Boutique series releases of some of the most famous Roland products: a new 909, a new 303, and even a Boutique version of the VP-330 vocoder synth.

We’ll have new Boutique series releases of some of the most famous Roland products: a new 909, a new 303, and even a Boutique version of the VP-330 vocoder synth.

Speaking of synthesizers, I couldn’t tell you how many emails we get saying, “We need a Jupiter; we need a Juno — and we need it stable, we need it affordable.” And you’re going to see an answer to that with our new System-8.

Another great thing is our new V-Drums. You know, Roland V-Drums are THE staple in electronic drums — a lot of people don’t even realize that we’re the largest drum company in the world, when it comes to revenue. And we don’t make acoustic drums — with the exception of our EL Cajon, which is layered acoustic and digital. The reason you don’t often see Roland V-Drums on stage — although you do see them in nearly every major studio, and in churches — is the look. Drummers want a big kit. Well, you’re gonna see an answer to that question, with a great solution to that “visual problem.”

See Roland’s solution released on 909 Day — the TD-50KV kit with the KD-A22 Kick Drum Converter on an acoustic kick drum:

There’s some brand-new areas we’re going into, also. We have the GP607 digital piano, and we haven’t had a grand piano in several years. It’s fantastic, and it’s at a price point that’s half of where we’ve ever had one. We know that’ll be a home run. We also have things like V-Moda headphones — fantastic headphones! Roland recently acquired a majority of shares, 70% of V-Moda, and we have all their gear out here. If anybody likes customizing anything — and I think we all do, just look at your cell phone cases — now you have the ability to take one of the finest pairs of headphones ever made, and make it your own. If you want to know what I mean by that, check out v-moda.com. They’re here in force — their headphones are all over the building. Interesting note: most of the artists already own them! So it’s a great marriage.

We have a brand-new line of amplifiers — the Boss Katana series. The question was asked, “Why doesn’t Boss make amplifiers?” Well, I’m happy to tell you, Boss makes amplifiers — and they’re insane.

With guitar products, we have a brand-new line of amplifiers — the Boss Katana series. The question was asked, “Why doesn’t Boss make amplifiers?” Well, I’m happy to tell you, Boss makes amplifiers — and they’re insane. “Katana” refers to the Japanese sword, which goes in line with our Waza amp that we released last year. Waza signifies serious, deep Japanese craftsmanship knowledge — I would always picture an old sword-maker. And so the Katana series takes that technology and sound quality and brings it down into price points as low as $199, with the ability to bring 55 different Boss effects into the amplifier and create your tone. 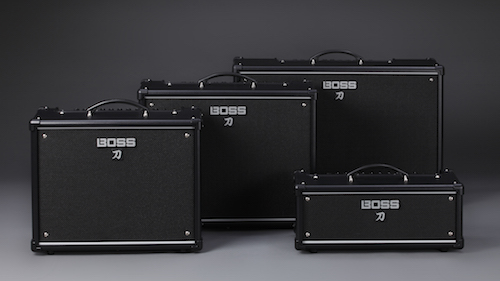 So, between new drums, new synths, new guitar products…there’s so much to talk about.

zZounds: Looking around Studio Six01, we’re seeing new gear for every member of the band, on stages set up with all Roland products. 909 Day really hits home how comprehensive your offerings are.

Brian: Having products in every category is always exciting. For us, it means that we can talk to every member of the band. By the way, when we were planning 909 Day, it started out as a two-hour show. We thought, well, we’ll invite 20 to 30 bands, and if we get half of them, it’ll be a total success. We didn’t expect them all to say yes! So, we got a long music festival here. And then, when they all said yes, we thought, okay, well, we got that many bands. But, you know, in all the musicians’ riders, every band member has the guitar they’re gonna use, and the pedals they’re gonna use, and the specific drum set, and it’s gotta be a keyboard set up this way. And we can’t strike the stage that many times.

We thought, well, we’d better put out word that we can’t strike the stage, and we want to highlight the new, latest Roland and Boss gear. So we’re going to put one set of gear on stage, and we’re going to ask every band to use that gear. And if they can’t do the gear total respect, we understand that — everyone’s got their own signature sounds, and they’re comfortable with how their gear feels. So we thought, well, we’ll grab the four or five artists that are okay with playing on our gear, and we’re gonna put on a killer show.

We thought, well, we’ll invite 20 to 30 bands, and if we get half of them, it’ll be a total success. We didn’t expect them all to say yes!

Again, much to our surprise, all the bands said, “Hey, cool — it’ll be like a reality show. We’re gonna go out there, and we may not know the gear that well, but we’re gonna rock on it, and we’re gonna see how it works.” At soundcheck, the bands are all having a blast. Exploring new gear is like the first time you sit down at the new Call of Duty and you’re going through the new maps — that’s what’s happening at soundcheck. I wish everyone could watch soundcheck live, but we can only broadcast so many hours!

We have new gear for everybody, including new gear for the sound guy and the video production team. Everybody’s got a new toy out here to play with, and it’ll be a lot of fun.