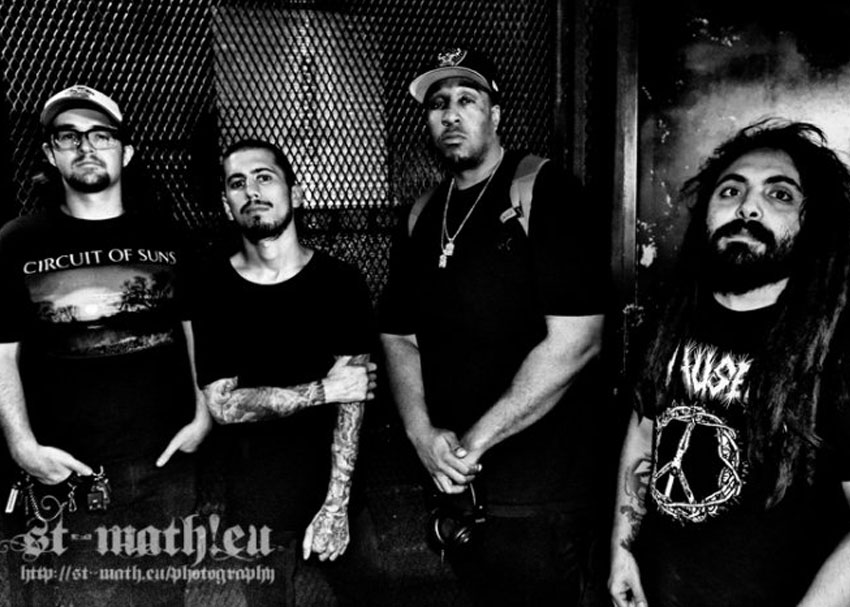 You’re a guitarist. You’ve been playing music pretty much as long as you can remember. You’re good. People know you’re good, and at long last, you’ve scored a gig in a killer band known the world over. What do you do now? Settle in for that reliable gig with that established, influential band? Not if you’re Nico Santora, former guitarist for Suicidal Tendencies and The Faceless. A combination of passion, ambition, and a desire to create something he could call his own led him to leave Suicidal Tendencies and form Lillake in 2015.

Nico and I met at a party thrown by Orange Amps and Seymour Duncan one night after Summer NAMM this past month. As Nick Bowcott from Marshall led the performing band through a searing cover of Thin Lizzy’s “Jailbreak,” Nico excitedly told me that the band’s debut album was right on the cusp of coming into the world. Later on, away from the chaos and clamor that is the NAMM convention, we got to talk in more detail about how the band formed and what Nico envisions going forward.

zZounds: How did Lillake first come about? Your Bandcamp page says you started the band early last year. Were you already writing the songs while you were still playing in Suicidal Tendencies?

Nico Santora: Lillake was officially started in March of 2015. That’s when the first few songs were in preproduction and the name was solidified, etc. Before all that, I had been writing all the time while on the road with Suicidal Tendencies. Eric (Moore) and I, having shared the stage with ST for years, always had a musical chemistry separate from the band, and we would shed weird ideas and oddly-timed riffs at rehearsals and sound checks. We always said it was a matter of time before we started a new project.

Then in the summer of 2014, I filled in on guitar for The Faceless in the Summer Slaughter tour and became well acquainted with Evan Brewer. I guess one day I just had this crazy idea of writing an album with Eric on drums and Evan on bass. Their styles coming together just hadn’t been done, and as a fan of music it seemed like something people would appreciate. Once one song was written, an idea for another one came right after it, and so on. The writing process flowed steadily, and eventually I had 45 minutes of original music.

zZounds: For someone totally unfamiliar with the genre, how would you describe Lillake’s sound?

Nico Santora: It’s funny, we just played our first shows up in NJ and NYC, and the response we’ve been getting from people is hilariously conflicted. [laughs] Like the response has been good, but it seems like it’s difficult for people to explain what Lillake sounds like, and really put a nail in it. When it came to piecing the album together, I tried to cover as much ground as possible dynamically, while retaining an overall “sound,” so to speak. There’s everything from whispering, talking, singing, screaming, clean sections, heavy sections, instrumentals, hooks, repetition, tempo changes, timing changes, fast parts, slow parts…something for everyone.

zZounds: Let’s talk guitars. What are you playing these days?

Nico Santora: I’ve been with ESP Guitars for a while now, and I absolutely love them! The guitars are amazing and the people over at HQ are the best. Right now I’ve got 3 different models that I choose between, all of which are great. The M-1, M-2, and the ST-2. I fit them up with locking tuners and FU Tone parts. They’re solid as all hell.

Nico Santora: For amps, I’ve been using Orange amps for a little over a year now and they’ve been amazing as well! I mainly use the Dual Dark 100 through an Orange cab and it slays. I try to keep it simple when it comes to my rig, just running through a tuner and delay pedal for clean stuff. That’s what I’ve always loved about Orange is the simplicity and consistency.

zZounds: If money and availability weren’t factors, what’s an instrument or piece of gear you’d love to get your hands on?

Nico Santora: I really would like to get the latest AxeFx and Kemper stuff. I get by just fine with what I’ve been using, but for recording purposes you just can’t beat the options that come with those modules. As far as instruments, I’d get a vintage Fender Strat and vintage Fender Jazz bass. Because I mean come on! 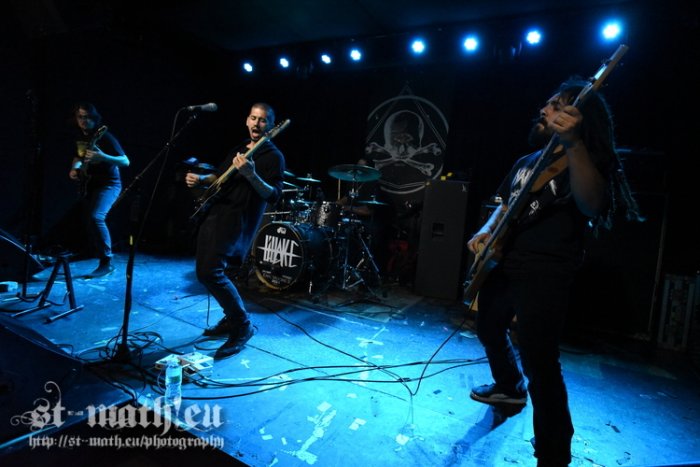 zZounds: For Lillake, you’ve recruited Suicidal Tendencies drummer, Eric Moore, and bassist Evan Brewer. Eric’s path to Lillake is a little more linear probably, but how did you get Evan into the fold? [I saw a different live lineup on the Lillake Facebook, so definitely correct me if I’m wrong]

Nico Santora: As I mentioned previously, Evan came into the picture when we toured together in The Faceless. He now plays bass in ENTHEOS, and they’ve been touring and are on the rise. We each do a bunch of different things and it’s difficult for us all to be available at the same time. When it came to booking our first shows, we had conflicting schedules so we moved forward and put together a solid live lineup.

I made some phone calls and it ended up being Eric Moore on drums, Steven Funderburk on guitar, Bruno Dosjax on bass, and myself on guitar and vocals. Steven Funderburk also plays guitar in a few death metal bands, Wretched and Through The Eyes Of The Dead and Bruno Dosjax plays bass in his band Cosmic Death, and is a good friend of ours and a killer bass player. After playing the first few shows, I’m really happy with this unit and am eager to get on some solid tour packages.

In this industry, it’s easy to get pigeonholed into a style or genre. Some people think all I play and write is thrash metal or death metal, and that’s a bummer to me because I play and love all kinds of music!

zZounds: Suicidal Tendencies casts a big shadow in terms of influence on a LOT of bands, let alone the people in the band, so playing all those years with Mike Muir and those guys would have to add some of its own flavor to your solo work.

Nico Santora: ST has definitely inspired and influenced me, as well as countless musicians and bands that wouldn’t exist if not for bands like Suicidal. Although as far as their influence on this project, I would say it’s pretty minimal. There are definitely a few songs and parts here and there where you can hear some influence from ST, but for the most part I was trying to do something completely different from that. In this industry, it’s easy to get pigeonholed into a style or genre. Some people think all I play and write is thrash metal or death metal, and that’s a bummer to me because I play and love all kinds of music! I try to grab inspiration from all types of bands and genres.

zZounds: Aside from S.T., who are some of your other influences, in terms of style/sound/songwriting?

Nico Santora: Some direct influences for Lillake are bands like Tool, Pentagram, Neurosis, Ghost, Opeth, Gojira, and the like. I personally favor that realm of music overall, and feel there is a void currently within that style that I wanted to throw my hat into. Once I started writing songs, a theme emerged that I just kind of went with, and it ended up sounding like Lillake sounds now.

zZounds: Along with that, Eric and Evan bring their own influences and ideas, so that had to add another dimension to things altogether.

Nico Santora: Absolutely. A huge part of the writing process was keeping Eric and Evan in mind. I knew if I gave them a bunch of space they’d be able to fill it in with their style and give each part new meaning. Some of the material calls for minimalism, while other stuff calls for an improv approach. That’s where they shine big time and showcase their individual styles. 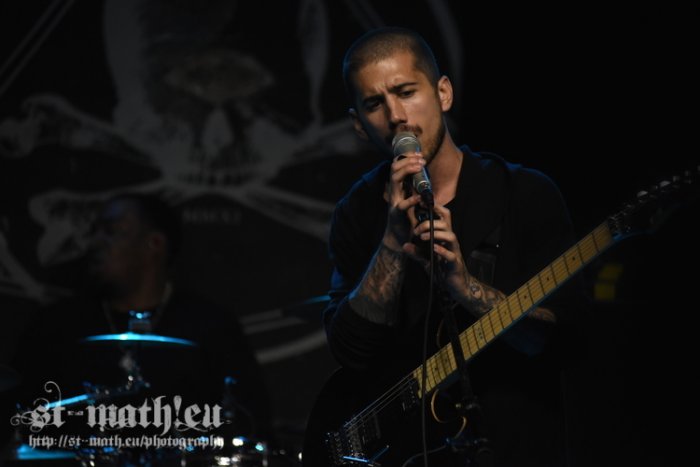 zZounds: What was the songwriting process like for Lillake? Did everyone else show up to a batch of finished, polished songs; did you just have general musical themes and your own parts worked out, or was it completely collaborative from start to finish?

Nico Santora: I wrote and produced all the music and lyrics, and brought the finished songs to Eric and Evan to record their parts over. In the future I would like to collaborate ideas, but for the most part Lillake is my baby.

zZounds: You’d mentioned when we met that you’re local to Nashville, but the rest of the band is sort of scattered around the country. How did that work out when it came time to start laying down tracks? Did everyone fly in so you could all work together in the same room, or did it come down to (e)mailing cuts back and forth?

Nico Santora: Yeah I moved to Nashville in April. While recording I was still living in L.A, though. And since I wrote everything, all there was to do was record. I personally drove up to Eric’s house and recorded his drums in his living room. After I edited and engineered the drums and made sure everything was all smooth, I flew to Nashville to record Evan’s bass parts in his home studio. Once the drums and bass were finished and sounding tight, I recorded the guitars and vocals at a friends studio in Naples, FL. After the album was all mixed, I sent it to Troy Glessner over at Spectre Studios for mastering. I’m very happy with how it came together, and I definitely saved a ton of money recording it myself.

zZounds: That’s the real trick. The more you can do yourself, the more you save on the expense of making a record. Sounds like you found a solid balance between DIY and collaboration, though. Let’s end with this: What’s something you love about touring?

zZounds: What’s something you hate about touring?

Nico Santora: The things I hate about touring: eating habits turn awful, long drives, lack of sleep, vehicle problems, being stuck on tour with people you don’t like, missing home/bed/shower, and if you’re in a relationship that can be tough too, and did I mention you eat like shit? [laughs]

zZounds: One-hundred percent true, the good and the bad.