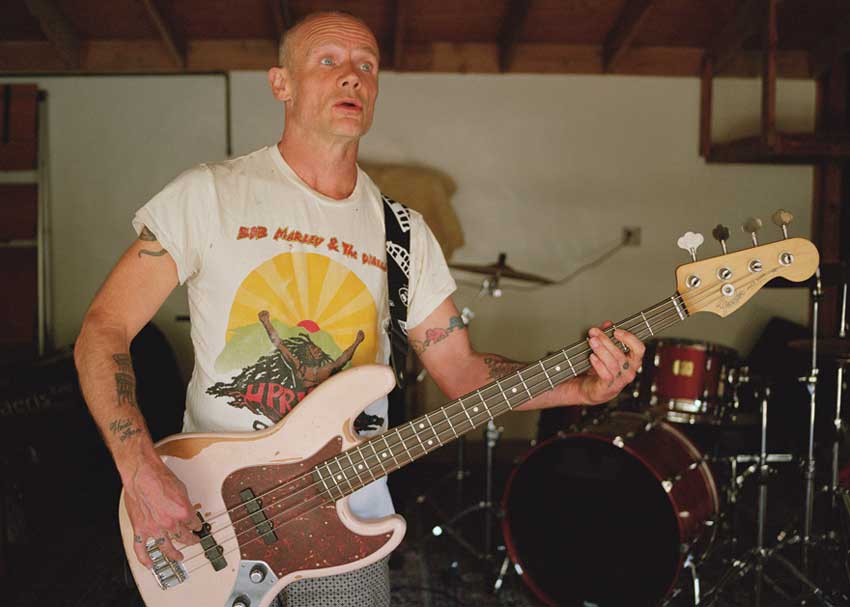 Flea’s Signature Fender Jazz Bass came as quite the surprise to us at Summer NAMM this year, and we’re stoked it’s now available! Fender had previously created a custom shop version of Flea’s bass, but this is the first time a production model has been made for the masses.

The Flea Signature Jazz Bass features a relic’d and  faded Shell Pink finish with vintage appointments like concentric knobs, a 20-fret C-shaped neck, barrel saddles, dot inlays and more. The bass’ neck, like its hardware, is worn for a rustic look and easy playability.

So why the vintage touches? This signature model is based on Flea’s own ’61 Jazz Bass, which he plays in supergroup Atoms for Peace and used to record the Red Hot Chili Peppers album Stadium Arcadium. Shell Pink was a very rare finish for Fender to use at the time, and some say Flea’s model might be the only left with such a finish. The bass is so unique, in fact, that purists and collectors took a collective gasp after Flea’s bass was spotted with two stickers on the body. The new signature model does not feature these — in fact, signature iconography is scarce, save for a “FLEA” engraving on the neck plate.

To celebrate the release of Flea’s signature bass, we’re taking a look at some of his lesser-known bass grooves. Outside the Red Hot Chili Peppers’ prolific canon, Flea has recorded a ton of material and has appeared on enough major hits to rival any session bassist. Let’s take a look at some of his most notable (and most eccentric) collaborations.

Before LL Cool J was a lip-licking ladies man and star on NCIS: Los Angeles, he was a rapper from Queens who embodied the toughness of New York. In the mid-’90s, he teamed up with the Red Hot Chili Peppers for a cut on the soundtrack to Howard Stern’s Private Parts. Rock/rap mashups often go very, very wrong, but “I Make My Own Rules” is saved by Flea’s slap bass and LL’s angry delivery on political topics, evoking Rage Against the Machine and Public Enemy.

In a bit of a departure from the norm, we get Incubus going prog for the soundtrack to Halo 2, featuring Flea on bass.  It’s an odd mashup — sometimes the band sounds like their early-2000s selves and the next they sound like Dream Theater jamming with Cirque Du Soleil. It’s kinda weird. Maybe in the context of the game it makes more sense? Apparently, only one of the movements was used. In any case, Flea’s bass grooves remain solid throughout, (especially on the third movement) and he shifts between such disparate styles with ease.

Some of the tracks on this list are obscure. Some are such huge hits you can’t help but wonder what Flea does with all his royalty money. The next time you’re at a wedding and this ’89 jam comes on, you can impress your date with the fact that Flea performed the bass line (and appeared in the video!) of the song everyone is getting awkward on the dance floor to.

I hadn’t heard of Perry Farrell’s project Satellite Party until I started doing research for this post. For the first 18 seconds of “Hard Life Easy,” I thought I had discovered some forgotten disco/glam throwback act. But after the music takes a brief pause, Flea and fellow Pepper John Frusciante kick in with a groove that is so unmistakably Red Hot I immediately pictured Anthony Kiedis flailing around to it. It’s a pretty funky track, but man do I have questions about what’s going on in that album cover…

Ahh…this one is smooth. Flea lends some incredible phased-out bass lines to this bit of funky chillwave from Dam Funk’s 2015 album Invite The Light. The fat bass permeates throughout and lends a distinctly human feel to an otherwise otherworldly track.

You really oughta know this one…Flea and Dave Navarro both laid down tracks for this hit from 1995’s Jagged Little Pill. On an album packed with cathartic anthems, “You Oughta Know” stands out for its dynamic range and funky groove, provided in part by Flea’s staccato bass work.