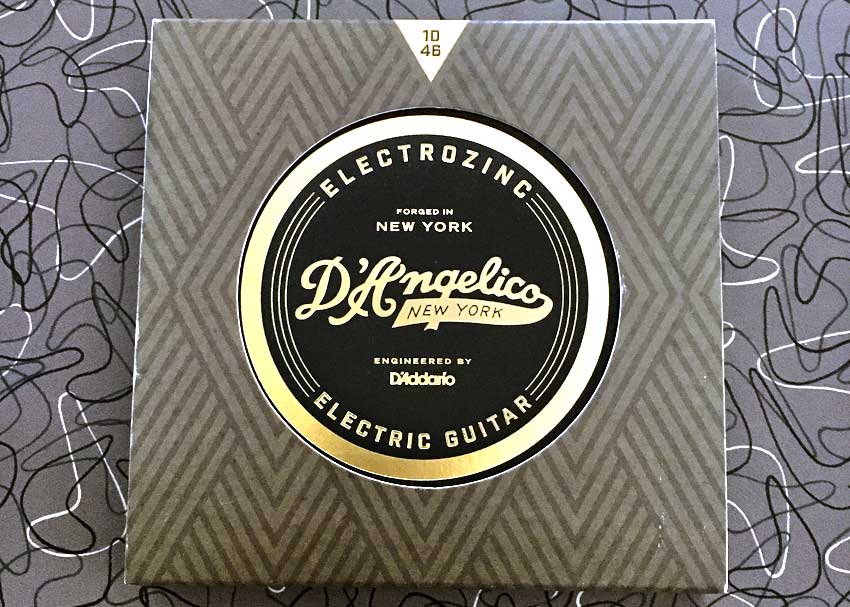 Summer NAMM saw the unveiling of tons of exciting new gear – from Boss’ Waza Craft treatment of two classic chorus effects in the new CE-2W, to Fender’s new offset body style electric guitars, to Reverend Guitars’ Jenn Wasner (Wye Oak) signature model — that makes the second half of 2016 all the more exciting for us.

But one of the most intriguing new releases from Summer NAMM is D’Angelico’s Electrozinc line of electric guitar strings. This new-for-2016 collaboration between D’Angelico and D’Addario is actually a throwback to the original collaboration between John D’Angelico and John D’Addario in the late 1930s. In those days, the two guitar luminaries crafted the world’s first round-wound electric guitar strings. Their secret sauce was Bethanized steel, a process developed by Bethlehem Steel that coated the metal in zinc, helping to help delay corrosion.

The first question anyone would ask is obvious: “Are these strings better than your average steel electric guitar strings?” Most electric guitar strings cost around $5-10, whereas D’Angelico Electrozinc strings are going to be about $14, so it’s worth taking a close look to decide whether or not that extra cost is worth it.

We should also ask, what does “better” mean? String manufacturers apply any number of coatings or other treatments to their strings, like nickel, cobalt, or coating, like Elixir’s Nanoweb, in the effort to make a “better” string. The benefits usually claimed are tonal (brighter output, warmer tone, etc.) and resistance to corrosion and breakage. So we’ll use those criteria when we examine Electrozinc strings. 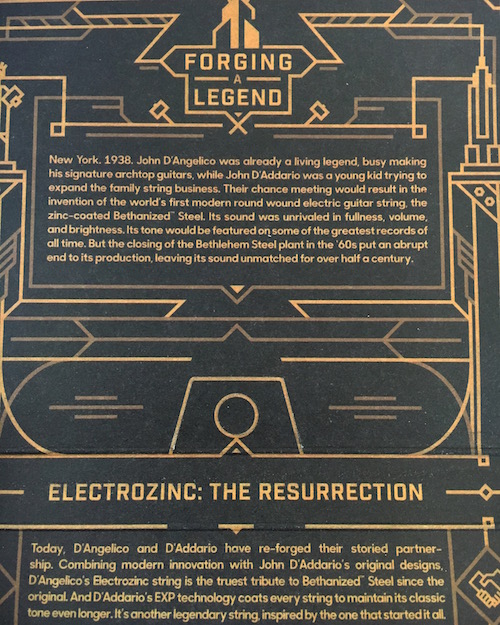 I talked to D’Angelico CEO, Brenden Cohen, one morning before the show floor at Summer NAMM opened, and he explained that zinc has not been an ingredient in string recipes since the 1970s. If you own a vintage guitar, however, it may have come with this type of strings on it, begging the rhetorical question: “Wouldn’t you want your guitar to sound just like it did back then?”

Similarly: “What’s an easy way to give your new guitar a generous dose of vintage vibe?”

That question’s not rhetorical, and it’s answer is easy: wire up a set of Electrozincs on it and you’re there. I put Electrozinc strings on my Telecaster and was able to set up a pretty easy — albeit unscientific — A/B test: my 15 years of experience using nothing but D’Addario EXL 110 strings against a set of 10-gauge Electrozincs. The results?

This @fender Telecaster just got a fresh set of @dangelicony’s Electrozinc strings. Check out blog.zzounds.com soon to find out how they’re different from your regular strings. #zZounds

Warmer. Smoother. Something special in the low-midrange. And I almost get this feeling like they’re not quite as… “snappy.” I don’t want to say less string tension, because in science terms that’s probably not accurate, but there’s almost a similar feeling that you get when you put down a Telecaster or Strat and pick up a Les Paul (or similar). It seems like there’s just a little more give and a little more absorption of your strumming than the pure, bright twang of the EXLs.

I’m still playing Electrozincs and deciding exactly what I think about them, including testing how long they last. But in the end, I wouldn’t be able to quantify for you if (or how much) D’Angelico Electrozinc strings are better than other electric guitar strings. However, we all know that barely anything can be counted up or measured when it comes to your guitar tone – it’s all about how it strikes you in the moment you strike that first chord, right? You either like it or you don’t, and explaining why only takes you so far.

That said, I think these strings are awesome. I love how they play, I love how they sound through my amp, and I highly recommend them, even if you’re just going to get one set to satisfy the same curiosity I had at first.

Minus The Bear InterviewFlea's Lesser-Known Grooves