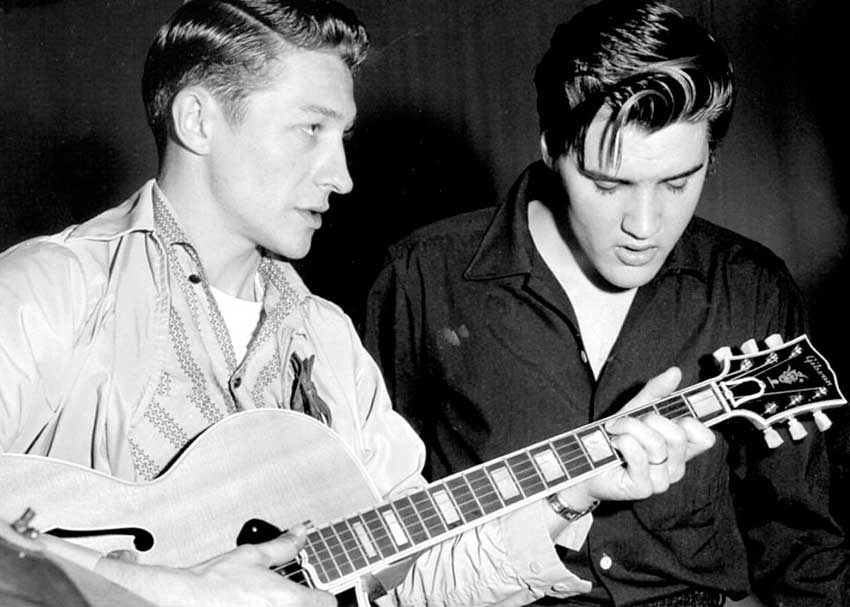 At around 11:30 yesterday morning, the news broke that legendary rockabilly guitarist and rock ‘n’ roll pioneer Scotty Moore had passed at his home in Nashville at the age of 84. As a guitarist, it’s not every day that one of your own passes, let alone one of the formative figures. At the pivot point between boogie-woogie, rhythm & blues and true-blue rock ‘n’ roll, Scotty was one of the most highly influential and trend setting players of his or any time.

Whatever gets written about how influential, delightful, and interesting Scotty Moore’s guitar playing was – it won’t ever be enough.

It’s 1956. Elvis Presley is storming the airwaves and irking parent-teacher associations all across the nation with a new rock ‘n’ roll sensation. The young rising star has captivated fans with a blend of blues, swing and country that is only just being defined by Elvis and his peers. It doesn’t take long for the guitar to come into the conversation. If Elvis is the driver of this sweat-soaked feeling of youthful rebellion and hysteria-inducing rhythm, then its V8 engine — the source of its energy that will endure for decades to come — is none other than Scotty Moore.

What could be more distinctive than the blistering leads of an electric guitar in between the croons and yelps of a rock classic? While the likes of Chuck Berry and John Lee Hooker are famed for their contributions in R&B guitar, Scotty Moore blended this heritage with the finger-picking swing of country-western players like Chet Atkins, creating a potent musical cocktail that spawned countless sub-genres still developing today.

Listening to “Heartbreak Hotel,” you hear this crossroads that inspired players like Keith Richards and Jimmy Page, with Moore playing lines that would find themselves fitting in perfectly some 15 years later on a Creedence Clearwater Revival or Allman Brothers recording.

Playing like this set the golden standard for studio guitar players for generations to come. Elvis himself lays down a strong acoustic undercurrent, allowing Scotty to divorce himself from the double duty of the great blues players and focus on using the electric guitar as a texture and a response to the vocals.

This is the very same mentality that players in Scotty’s home of Nashville are using still today. Additionally, his use of slap-back echo and tremolo has become inseparable from the sound of rockabilly, exhibited classically on “Mystery Train,” which is famously covered by Brian Setzer, the King of Swing himself.

Of course, the electric lead is most impactful when the solo break hits. The guitar solo up to this point had certainly been a staple in blues music, but the sudden flame of a blistering lead bursting through the sonic texture was the torch that made rock ‘n’ roll the mean problem child that Poppa Blues could never contain. What better example of this is there than the famous face-melter of “Hound Dog,” a song famously formative of the genre itself?

Scotty’s guitar playing was so popular that when he recorded his solo album in ’64, they called it The Guitar That Changed the World in reference to his Gibson Super 400, the workhorse Moore used on all the early Elvis sessions.

The playing you hear on records like “Good Rocking Tonight” is so institutionalized, it’s hard to separate it from the identity of the instrument itself, and that’s exactly the point. Scotty found himself in the unique position of managing and playing with a new fusion of musical genres.

Elvis was known for his vast knowledge of traditional American music and the Swiss Army knife of styles. Scotty Moore blended all these styles into a tangy guitar smoothie fit for a “King” — and for many more to come.