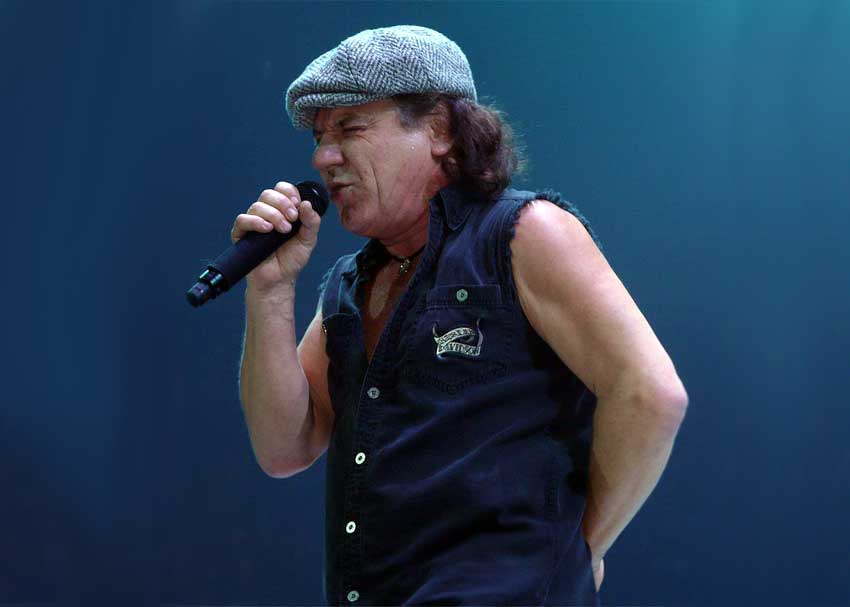 Update (March 23): When last we heard, AC/DC singer Brian Johnson was having a rough time continuing to front the Australian hard rock band. At first, his largest setback was his hearing – or impending lack thereof – as doctors warned him against “total hearing loss.” The plot thickened as comedian Jim Breuer, a close friend of Johnson’s, explained on his podcast, The Metal In Me, that Brian had been all but ousted from the band before he could relay news that a second doctor’s opinion lessened the severity of his condition.

However, in what is arguably the most unexpected turn of events in this story, it’s now sounding like none other than Guns ‘N’ Roses mastermind, Axl Rose, will be stepping in to help cap off the remaining ten dates on the band’s U.S. tour.

Alternative Nation reports that rumors started circulating in Atlanta, where Rose was spotted for some kind of mysterious “rehearsals.” Fans and insiders immediately started connecting dots to AC/DC’s current predicament, and before long, Ross Malcolm Young (Angus Young’s nephew) was confirming the news on Facebook. He also corroborated Rose’s involvement in reply to skeptics commenting on the post before deleting everything altogether. 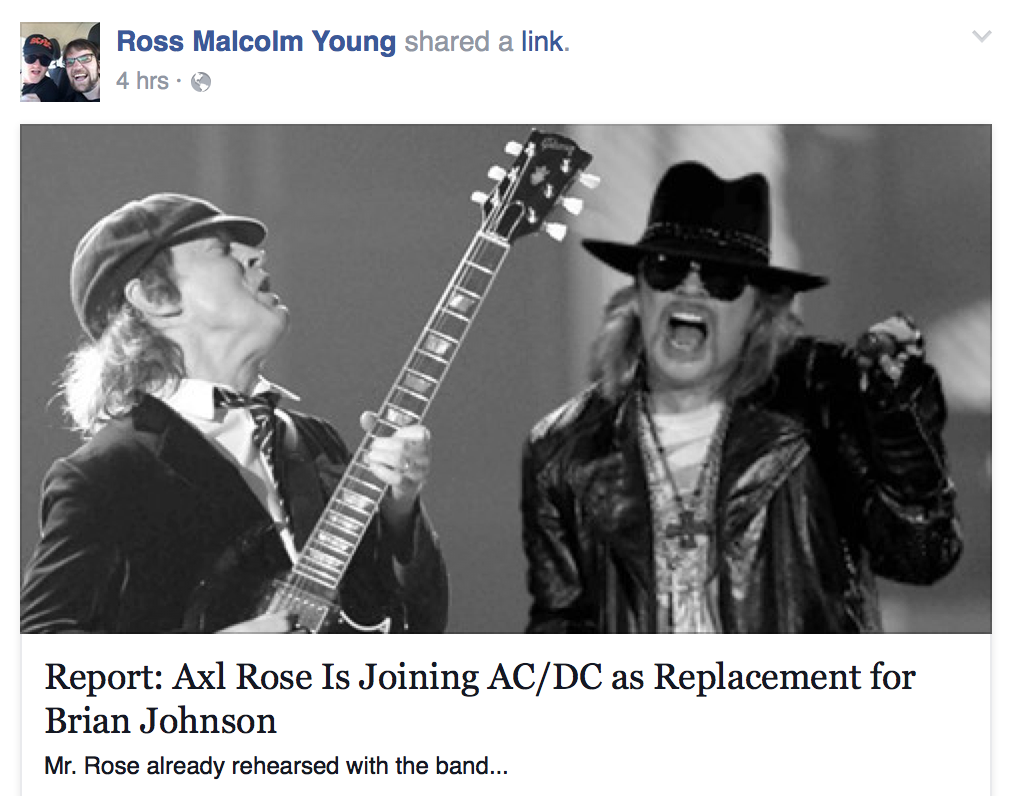 Jason Bailey, an Atlanta radio DJ, also claimed to have an “inside source” who could confirm Rose temporarily joining AC/DC. Said, Bailey, “From what I was told, this was all kind of new inside information to me, Angus is a very black and white guy.” he added. “He’s like, Brian, for health reasons, can’t continue fronting the band. He was supposed to retire after the last tour, so they wanted to continue going out on the road and continue making music, so if you can’t do it, we appreciate your services, but the show must go on. They’re in town, they were auditioning people for the job, and then they flew Axl in, again, this is from my source.”

This all comes around the same time that Guns ‘N’ Roses are gearing up for a highly anticipated string of “reunion” shows featuring the closest to the original lineup as we’re likely to see anytime soon. The favored rumors at this point are that Axl will front AC/DC’s remaining U.S. dates into the beginning of April before changing horses for G’N’R dates as AC/DC heads off to Europe (presumably with one or more new guest singers)

As always, we’ll be sure to update you with more information as we get it.

UPDATE (March 8): There’s good news and bad news. The good news is that AC/DC singer, Brian Johnson, was relieved after seeking a second medical opinion to find out that his hearing loss (and the potential for “total hearing loss“) was not as grim as initially forecast . The bad news is that this development apparently came too late to change his fate insofar as the band’s other members were concerned.

According to Ultimate Classic Rock, the decision was neither mutual, nor even expected for Johnson. In the latest episode of his podcast, The Metal In Me, comedian Jim Breuer — a close, long-time friend of Johnson’s — explained that after learning of the urgency of protecting his hearing, Brian contacted the band to let them know, but by the time he got the second (less alarming) prognosis, AC/DC’s tour had already been canceled, word was circulating that guest singers were already lined up, and before he knew it, “all his luggage that he toured with showed up at his driveway.” He further elaborated that other members of the band had not been in contact with Johnson with regard to either his health or his reaction to hearing the news second-hand.

Breuer added that the singer — who’s fronted the band for the last 36 years — had said that despite his long tenure with AC/DC, he now feels like a “hired gun” who’d been “kicked to the curb.”

We’ve yet to hear anything from the other members of the band, but if what Breuer is relaying to the public is true, it might spell an anti-climactic end to one of the most iconic bands in the world as we know them.

You may have heard in the last 24 hours or so that AC/DC is postponing (and hopefully rescheduling) a month’s worth of American tour dates to be made up “later in the year, likely with a guest vocalist,” according to the band’s website.

AC/DC is notoriously loud, so it’s not a huge shock that it eventually caught up with at least one of them, but it kind of makes you pause to wonder how your own ears are holding up, doesn’t it? Unless you’re taking active measures to protect your hearing, the odds are definitely stacked against you. 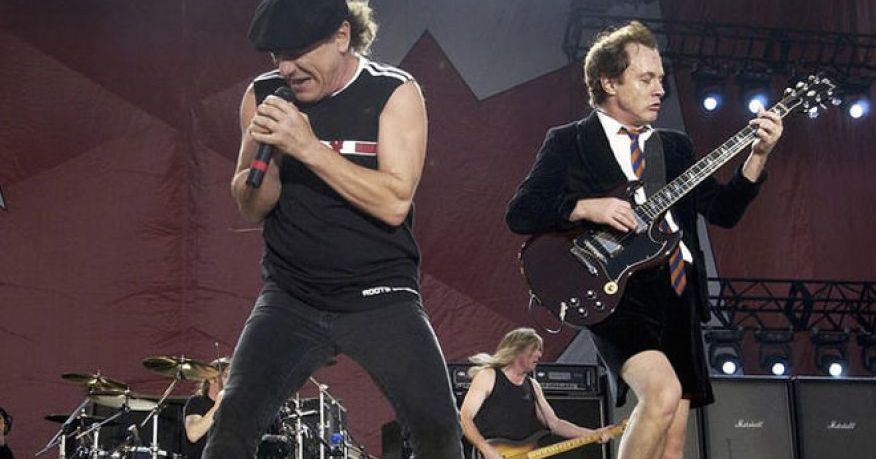 Example: your tube amp sounds best when you crank it. That’s actually how it functions; it’s not just a matter of opinion. You need to really drive the tubes in order to get them to produce the best sound they’re capable of.

Another example: we’ve all been to concerts where the bass is so loud you feel it in your chest and you could swear the contents of your pockets are settling. Entire genres of music are successful and popular because of crowds feeling completely engulfed in that sound.

Let’s face it: music sounds good loud. When a song you love comes on in the car, you don’t quickly reach to dial in a reasonable volume; you spin that volume knob like it’s a roulette table. Some stereos even have a “loudness” option that simulates how you perceive music at loud volumes without making your family and neighbors hate you. It’s not just that it sounds good; loud music feels good on some primitive level.

I’ll admit that I used to be way worse than the average person. When I was in high school, you could probably hear the songs I was listening to via ear buds clear as day from across the room. I liked my music to be LOUD all the time. I have tons of memories from college of speeding down dark country roads at night with the music blaring from four open windows. After all, I spent almost $1,000 on a car stereo – why not make the most of it?

Lately, though, I’ve found myself with a much different attitude. Part of that is realizing that sound quality can more than make up for sound quantity. Having a good pair of headphones was the beginning – I didn’t have to dime the song to hear every part like I did with cheap ear buds — and after one instance of not leaving a band rehearsal with my whole skull ringing into the next morning, I can’t imagine not using ear plugs now. I guess it’s one of those things I didn’t realize I needed until after I tried it.

So here’s a shoutout to an unsung category on zZounds.com: hearing protection.

Ear plug Recommendations for Those About to Rock:

Mack’s is a name in hearing protection everyone probably recognizes. You don’t even have to go to a music store/site to get them. I’ve seen them in the aisle with the ACE bandages and eye drops at grocery stores. They’re cheap and they’re effective, reducing as much as -20dB of noise. However, foam ear plugs have a couple of shortcomings worth noting. First, they are particularly good at suppressing high-frequencies, (think the upper frets of guitars, high octaves on keyboards, cymbals and certain vocals) causing some performances to sound “muffled.”  The other drawback is they won’t last forever. Foam ear plugs like Mack’s eventually wear down and lose some of their stopping power. But for less than $2, three pairs is an unbeatable deal, especially as a last-minute save at the drugstore on your way to a doom metal show. 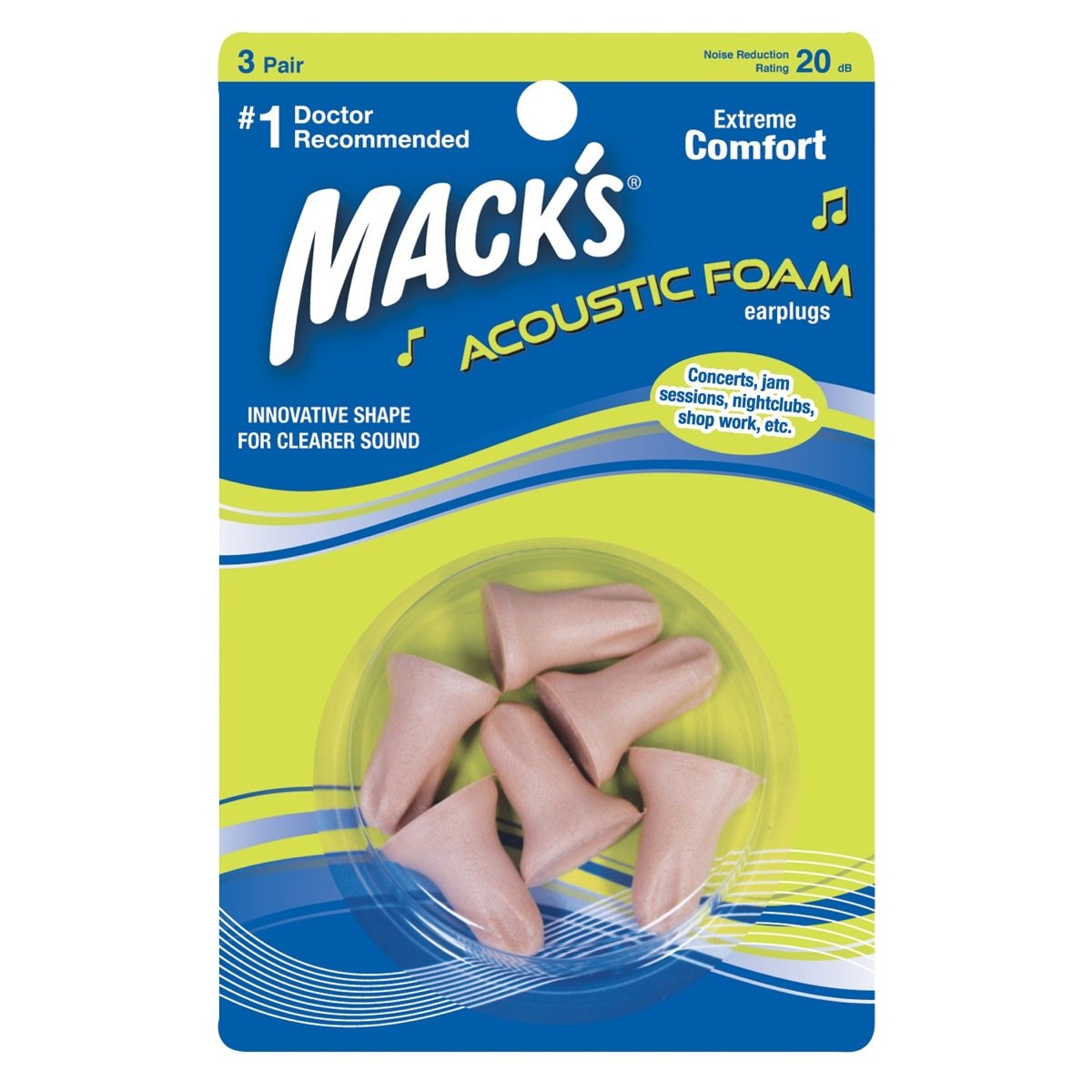 Made of soft, squishy foam, these ear plugs are a comfortable enough to wear at concerts, clubs, jam sessions, and even to sleep.

One stop shop Fender gives you the tools to protect your ears against too much of a good thing with their Touring Series hi-fi ear plugs. Their contoured shape is part of a larger trend in hearing protection: a design that’s meant to work with the way your ears interpret sounds so that loudness is attenuated accurately rather than simply muffled. Musician ear plugs like these reduce noise while keeping the higher-frequencies intact, unlike foam ear plugs. These also advertise a longer lifespan than the foam types and offer -12dB of noise reduction. They’re also latex-free in case that’s a concern that’s kept you from the foam kind. 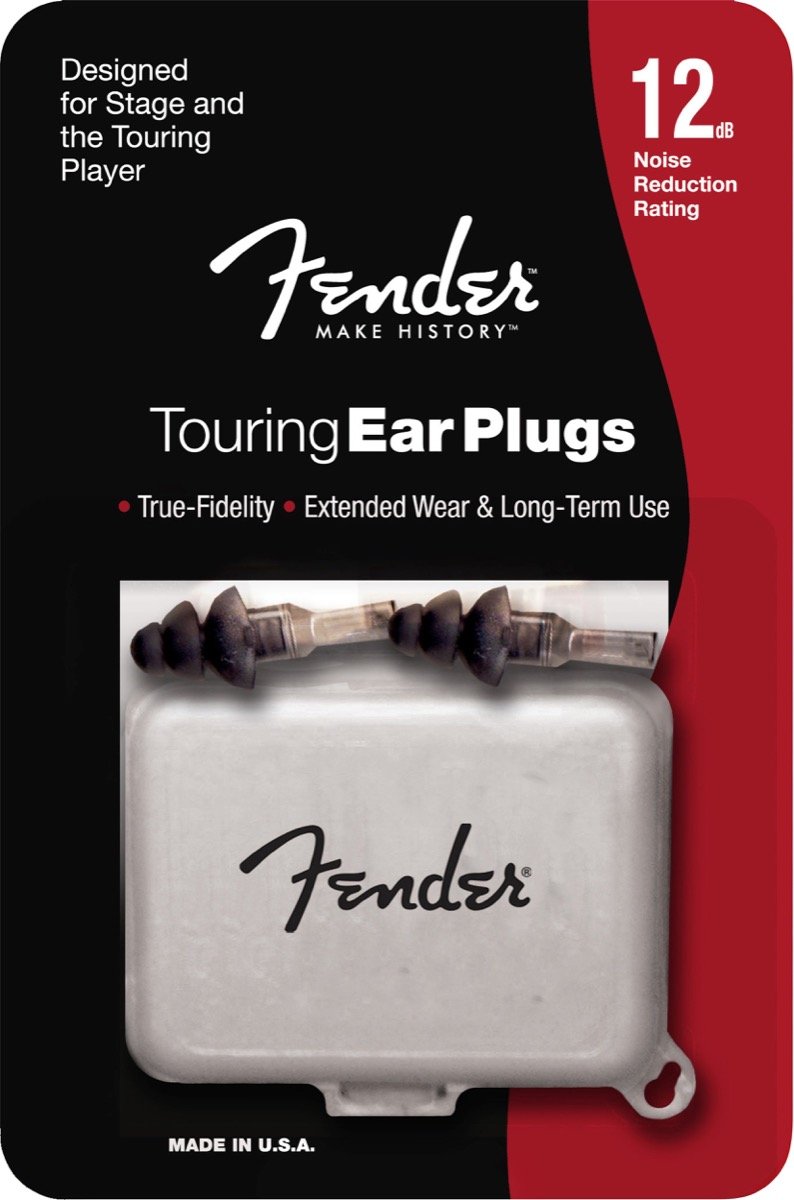 Fender cares about your ears — it’s why they developed Touring Series Hi-Fi ear plugs, offering up to 12 dB noise reduction without muffling what you hear.

Of the ear plugs mentioned here, these are both the most expensive as well as the most effective – possibly too effective, depending on the context. DUBS reduce noise by -12dB on average and offer particularly strong reduction of midrange frequencies at -24dB, without muffling the high end. I play bass in a loud grunge/psych/lately-kinda-prog band and gave DUBS a try for the first time a few months ago at a rehearsal. It actually took me a few weeks to get used to how much noise they block; during that time, there were instances where we’d be playing and all of a sudden everyone was looking at me because I’d landed a half step off from the note I was going for and couldn’t tell. Since then, though, I’ve gotten used to them and I wear them religiously when I’m playing almost anything louder than bedroom volumes. They’re also virtually indestructible and come with a little case to keep them in. I myself don’t like to periodically replace ear plugs because it only makes it more likely that I’ll forget, so I was willing to spend the extra money on something I knew I’d have forever. 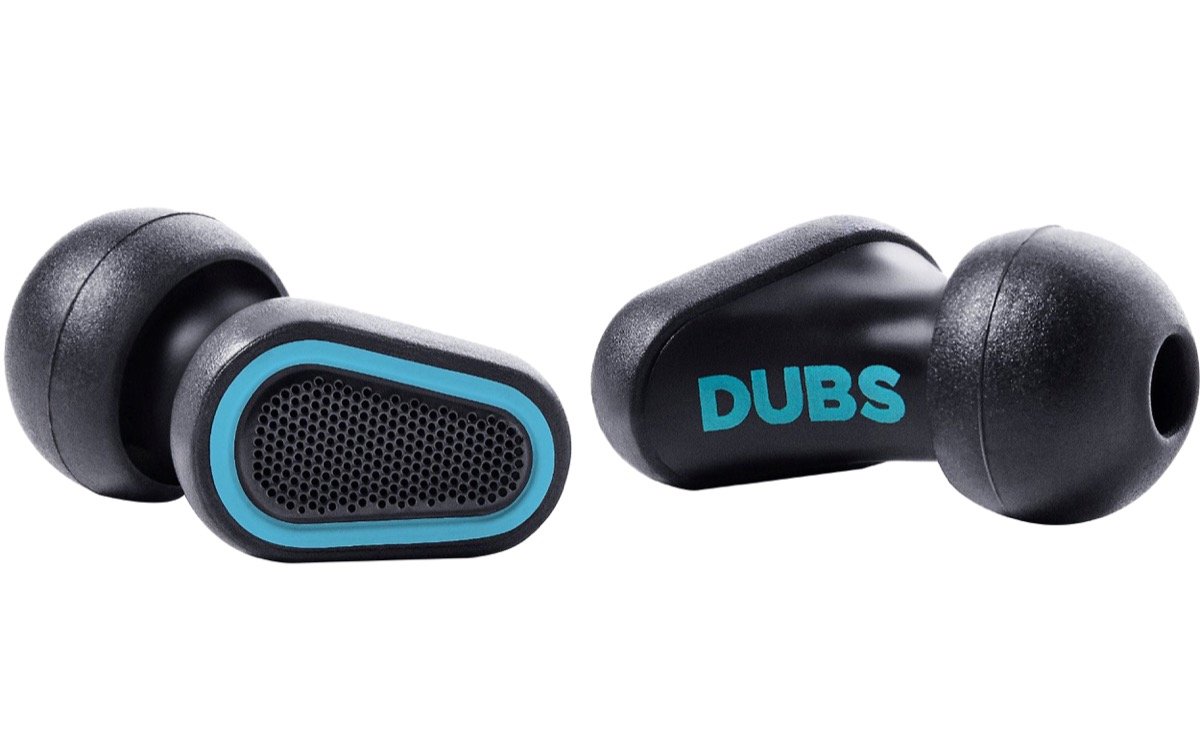 Protect your ears without missing out on the clarity of live sound. DUBS acoustic filters give 12dB of noise reduction and use dynamic attenuation to preserve sound quality.

Want to see some more? You can check out our entire lineup of hearing protection options here.