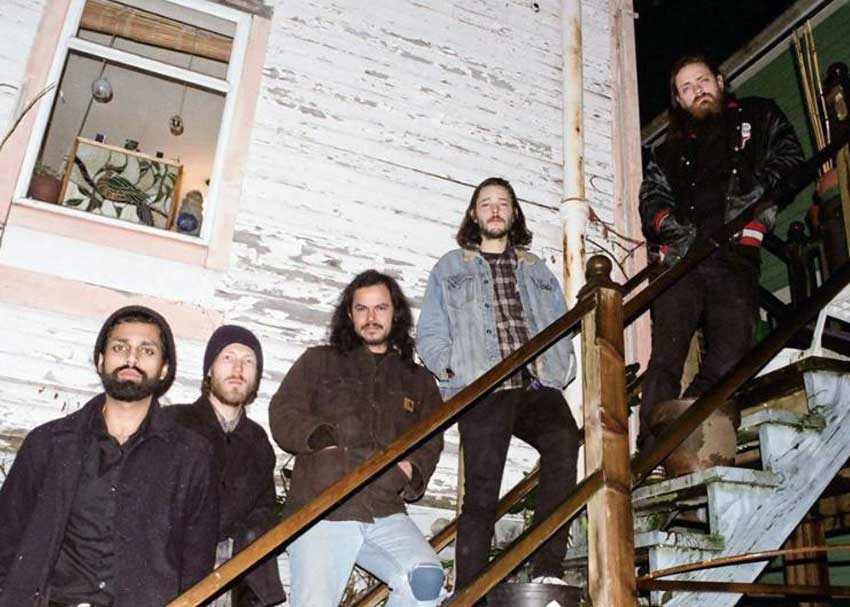 Building layered songs out of equal parts grunge, post-rock, and psychedelic materials, Vancouver’s Summering is best enjoyed when you have time set aside to listen. Each track on the band’s debut album S/T takes its time developing into a lo-fi aural scene awash in reverb and echoes. Singer Paul Stewart’s voice sits at the top of it all — delivering carefully drawn lyrics as he over ambient guitar parts like in the self-titled track: You said you’d see it through, until it saw through you.” It’s not all picturesque, though, as songs like “Temporary Window” show — Summering can in fact rise from its dreamy states and cause some ruckus.

Summering came together nearly two years ago when vocalist Paul Stewart, an established singer-songwriter in the Vancouver scene, joined forces with guitarists Mathew Durie, Mohammad Sharar, bassist Ryan Bekolay, and drummer Zachary Treble. The band was initially formed to play an opening slot for a friend, but as they fleshed out Stewart’s songs — many of the songs on S/T were written by him prior to Summering’s formation — their distinct influences and backgrounds yielded a sound they wanted to take further.

The result was S/T, released last October. I suggest setting aside some time and streaming it. Or better yet, put on a good set of headphones and take a nice long walk with S/T as your soundtrack. Summering were nice enough to take the time to answer my questions on the Vancouver scene, their gear and future plans. Check it all out below.

zZounds: Tell me a little bit about the scene in Vancouver. Are you in a tight-knit group with other musicians from around there?

Summering: Yeah, I’d say so — most of us go to shows on the regular. Mohammad and Ryan have been pretty involved in the punk scene for a long time here, Mat has been playing in a project called Fortresses with our good friend Ora Cogan, Paul’s been playing solo shows for quite some time. There’s a lot of overlap between all of the communities in which we are directly involved, however there are quite a few scenes which exist completely apart from us. There are also a lot of artist-run spaces which we frequent due to the City of Vancouver’s strict regulation of venues, which definitely fosters a feeling of solidarity and community.

zZounds: What are your plans for touring in the near future?

zZounds: I know Paul has performed as a solo artist prior to Summering. Is he the chief songwriter in the band? How has his past experience influenced Summering?

Summering: The S/T album was mainly written around existing songs that Paul had already composed. As we’ve grown as a band we are writing more as a full group. If you compared Summering to Paul’s solo material, I’m sure you could make the connection, but everyone’s influence is present on the album.

zZounds: How did the songs on S/T come to be, and what was your recording process like?

Summering: There was a moment when a friend of ours was touring through Vancouver and asked Ryan if he knew of any bands that could play the opening slot. Ryan, Mat, and Paul had been throwing some ideas around and it proved to be a good opportunity to perform. We reworked some of Paul’s newer material to be realized as a full band. Over a year later and a few lineup changes, Summering had naturally sort of come to be. We spent a lot of time jamming and hashing out compositions before we decided to record the album and when the time came we spent 3 days at Monarch Studios in Vancouver. We recorded everything live off the floor with the exception of vocals which were mostly recorded by Josh Stevenson at Otic Sound and at Profile Studios by Chon. Mat’s guitar was overdubbed back at Monarch simply because we didn’t have enough isolation booths for all three guitars during the initial session. With the limited amount of time we had in the studio, we’re pretty happy with how it sounds. Everyone would probably like to be able to spend a month or two on a self-released record but the reality is we couldn’t afford it, haha. Overall, the recording process was really quick and we didn’t have a lot of time to second guess ourselves which may have been a good thing.

zZounds: What is the significance of your band’s name? In the track by the same name, you hint at the notion of getting away, or a retreat. Am I anywhere close with this?

Summering: The song is about a friend. Our first show was at a punk house and a friend needed a name for the flyer, so they just took the title of one track they could remember the name of and it stuck.

zZounds: Can Mohammad and Mat discuss how they share guitar duties in Summering?

Summering: There are actually three guitars in the band. Paul usually provides the skeleton of the song, while Mat and Mohammad provide a lot of color and movement, generally sharing “lead” duties.

zZounds: Can you each tell me a bit about your rigs, and one key piece of gear and why it’s essential to you?

Summering: Paul’s rig is relatively simple — his sound mostly relies on the amp’s natural tone. He plays a Gibson Les Paul out of a 1968 Supro Statesman 2×12 half stack with a few effects pedals. The most essential part is the amp, it’s pretty unique — it breaks up really nicely. Mat plays a Telecaster through a subjectively large pedal board relying on multiple delay pedals and reverb to create ambient textures. He also uses an Empress Heavy and ProCo Turbo Rat to create the overdriven and distorted leads throughout. Ryan’s favorite piece of gear is the SansAmp Bassdriver. Mohammad used a Union SubBuzz on the record with an Electro-Harmonix Cathedral Reverb pedal, in addition to distortion and delay at times, all coming out of a Vox AC30. That amp has a lot of clarity.

zZounds: I like the way you take simple repeating melodies and expand upon them, like the guitar line in “Words” that has so much going on around it. Do those ideas develop during practices or while jamming?

Summering: Yeah, we’ve spent a lot of time with these songs. I wish we had some early recordings of the songs from a year ago so you could hear how they’ve progressed. A lot of the ideas come from just jamming sections of the songs which eventually get refined into what they’ve become.