Maurice White of Earth, Wind, and Fire Dead at 74

Maurice White’s battle with Parkinson’s may have ended on Feb. 4th, but something vastly important will live on in the legacy of his music. Turn on the radio, maybe to that side of the dial you tend to neglect, or listen to more voraciously than others, and before today you’d be bound to hear something from Earth, Wind, and Fire and say to yourself “they did this?” That’s the beauty of the band that Maurice co-founded.

Drummer, songwriter, and visionary, it was Maurice who gave name to the band after the makeup of his own astrological sign. It was Maurice White’s makeup with roots in deep in blues, soul, funk, and jazz that allowed this group to explore vast amounts of territory that others would later mine for inspirational samplings. We all have our favorites — as a whole their most popular song was the joyful “Shining Star,” but the more you listen, the more you go back to songs like “Devotion,” “September,” “Fantasy,” or [insert your favorite deep cut here]. Maurice had a vision of presenting Afrocentric music that could speak both to certain aspirations within his community, yet expand outwardly to tap into communal progress that anyone can draw inspiration from. If you’re along for the ride within a song, within an album, and certainly within a lifetime, all of their songs have something wonderfully evolving that will matter in different ways, in different stages of your life. Far from guilty pleasure, the best Earth, Wind and Fire songs, have something special that transcends such a groove.

Head to the Sky was the album that catapulted his band into the limelight. From then on, White would navigate them through the evolution of funk, jazz fusion, disco, and electro. Forget the countless gold and platinum records, forget the countless Grammys, and forget the Rock and Roll Hall of Fame induction — White was moved by making music that tackled simple things that went hand-in-hand with his music. Valuing your sense of worth was first and foremost. 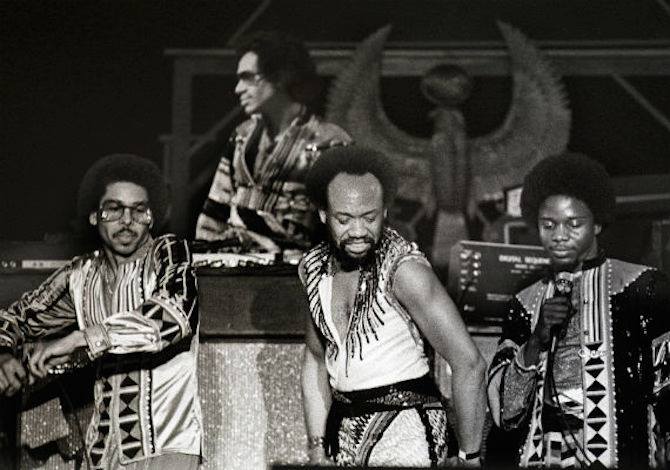 As lead vocalist Philip Bailey told the Telegraph: “You have to understand that we were 21 years old when we started our journey with Earth, Wind and Fire and Maurice was 31, and so he had done a lot more things than we had. Maurice was interested in establishing a credibility of a different morality about musicians and their lifestyles. So we were into healthy food, meditation, taking vitamins, reading philosophical books, being students of life.”

A groove can present that perfect balance to display everything that went hand-in-hand with gaining a certain enlightenment. In Brazil, Colombia, all the way to France and elsewhere, whole groups sprouted out of the influence of those ideas and sounds.

This Maurice, the one that had knowledge to share, was the one that would grace the worlds of other musicians like Ramsey Lewis, Minnie Riperton, The Emotions, and Deniece Williams as either producer or backing musician. Constantly working and yearning to be a positive force in music, (and all that entails) it’s that lovely vibration you’ll always sense in songs like “Free” and “Close Your Eyes and Remember.”

Other musicians like Quincy Jones and The Brothers Johnson would follow their lead and push forward those ideals into the future. The beauty, though, of White’s passing is as we celebrate his work, and remember his life, is that one can’t help but be moved upward by his music. I mean, in the end, it’s all about love.

THE EMOTIONS “BEST OF MY LOVE” WRITTEN BY MAURICE WHITE.