Ted Leo & The Pharmacists – The Tyranny of Distance 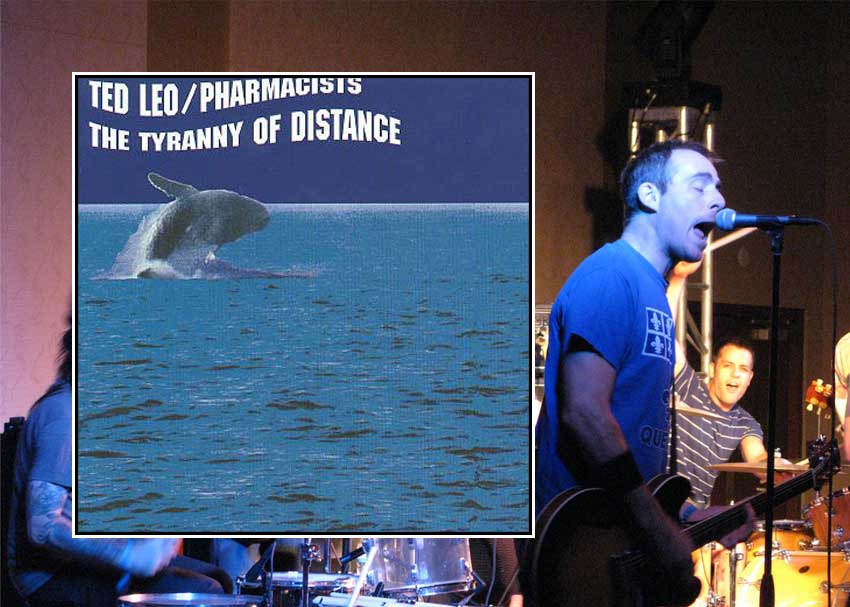 The Tyranny of Distance is the second album from Ted Leo and the Pharmacists, and it sounds absolutely huge. From the distant, feeding-back guitar that kicks it off, all the way through the ending featuring just Ted and his ES-335, it’s a monumental work.

I’ll talk about all that comes in between in a moment, but let’s go back to the album’s beginning first. The opening cut “Biomusicology” is graced by Ted’s gorgeous lyrics and deft sense of melody. It sounds a bit like a sea shanty, appropriate given the thematic elements to come. From then on, it’s straight-ahead rocking, from the furiously strummed chords on “Parallel or Together” to the jangling, Byrds-esque “Under The Hedge.” Yet, just when you think you’ve had enough of sing-songy vocals on “The Dial Up,” and “Timorous Me,” you’re walloped — quite literally — by the chugging beast that is “Stove By a Whale,” with all its glorious vocal clipping. Even the tender acoustic piece “The Gold Finch and the Red Oak Tree” manages to avoid the “this-is-the-album’s-acoustic-song” platitudes. Tyranny has a breadth of styles you just don’t see within one album very often.

And yes, if you haven’t guessed, I’m a huge TL/RX fan. I’ve been taken by the band’s hard-hitting and fast-paced brand of punk since their 2007 release Living With the Living. Categorizing TL/RX’s sound is about as tough as finding their albums in a record store: do I search under “T,” “L,” or “P?” I’ve heard comparisons to Thin Lizzy and that’s a good place to start, but add some Clash, some Husker Du, a splash of Celtic influence, the spirit of Desmond Dekker, and you’ve got a much better idea. To me, their sound is that upbeat, breakneck punk juxtaposed with Ted’s vocal melodies and well-rounded falsetto.

Thankfully, the band’s sound has remained fairly consistent throughout their career, but I still think The Tyranny of Distance is their unquestioned Magnum Opus. It’s the kind of album that needs to be heard start to finish but whose individual tracks get caught in your head in the best possible way. Unfortunately, Ted and his Pharmacists haven’t released anything since 2010, but he recently did some great work with Aimee Mann in a project they call The Both that is definitely worth checking out if you’re a fan of either.

Citizen - Everybody Is Going To HeavenFrameworks - Loom