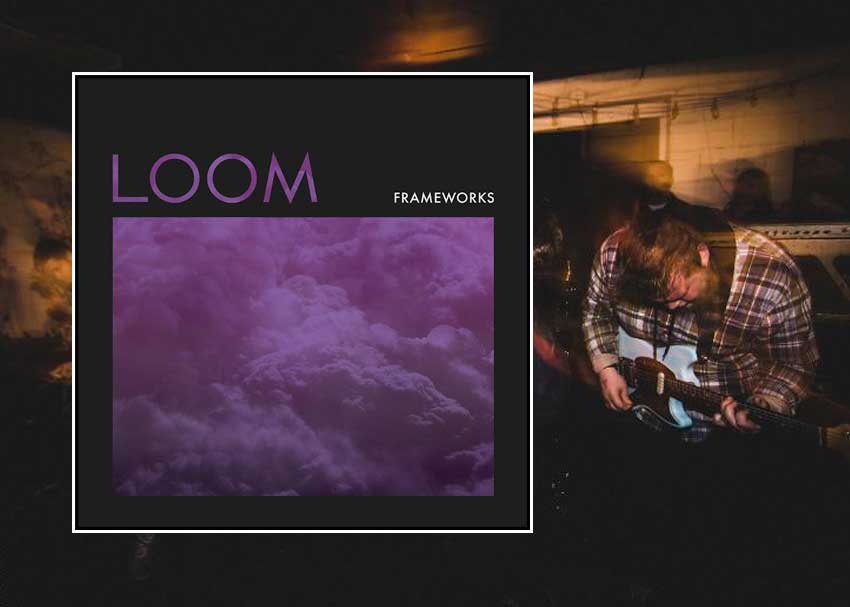 Before moving to Chicago I lived in Tallahassee, FL, about two hours northwest from Gainesville, hometown of Frameworks. They’ve been around since 2011 with their first EP, Every Day is the Same, coming out in October of that year. I booked the first (house) show they played in Tallahassee, and now they’re signed with Topshelf Records, touring Europe and opening for bands like Pianos Become the Teeth (Epitaph), United Nations (members of Thursday), and co-headlining with Prawn (Topshelf). Time flies.

Their debut LP, Loom, was released in April of 2014, and I have to say it’s been a pleasure watching how these talented guys have grown throughout the years. They have always had a knack for auxiliary and complementary tracks and instrumentation since their first release — with tambourines, shakers and ambient intros/outros making cameos throughout the CD — and they have just polished that part of their sound in Loom. Creaking doors and tuning guitars introduce us to the first song on the album, the title track. A rhythmically driven, uptempo tune really sets the tone for the record, presenting a sort of optimism wrapped in discord.

This sort of juxtaposition is recurring, with songs like “True Wealth” and “Rosie” flirting with major keys and upbeat rhythms, wrapped in passionate vocals and gritty low end. “Bright and New” sounds like it would just rest on the ‘happy’ scale, but it’s one of the most emotionally jarring tunes on the record, with guitarist Cory Fischer taking the vocal reins and just abusing the mic midway through the track. A tasteful nod to an old-timey ditty closes out that tune, showing the band’s range and maturity.

The album continues with “Familiar Haze,” a melancholy track that slips perfectly into “Autonomy,” which rounds out the aggressive side of the LP. Even when Frameworks is trudging out intense riffs with intense vocals, you can always hear a twang of light from the lead guitar, creating a momentous ambiance for the duration of the record. This is partly thanks to the gear used to record the album. According to Fischer, a ’60s Gretsch hollow body, Orange Rockverb 100, and a handful of pedals (like Boss Chorus Ensemble and Octave) were sprinkled throughout the album.

“Our band is full of sensitive elitist music nerds,” says Fischer. “So we went into writing this album hoping to satisfy each members distinct musical taste and blend it together.”

The album closes with “Agreeable Thoughts,” the foil to “Autonomy” and a paraphrase of the sentimental approach that makes this album special.

Frameworks is working on an upcoming release and will be on the road again soon. Follow their updates with the buttons below.

Ted Leo & The Pharmacists - The Tyranny of DistanceGet the Tone: Tony Iommi