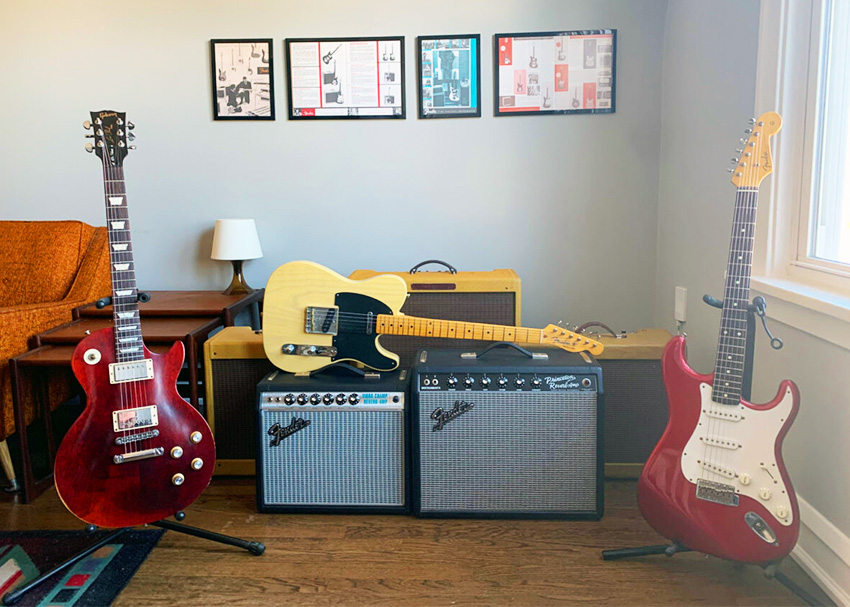 When I first heard that Fender was going to release a ‘68 Custom Vibro Champ Reverb, I knew I had to try one out. As a self-proclaimed Fender fanboy who loves cranking up small amps to the point where they sound like they might collapse, it was destiny. Don’t let its small size make you think this isn’t a serious piece of kit. It thrives in jam sessions, bedroom practice, and in a studio setting.

While Fender never made a Vibro Champ Reverb in 1968 or any other year, the ’68 Custom Vibro Champ is a take on what could have been an original design in the late 1960s. Instead of having an 8″ speaker like its predecessors, this amp has a 10″ Celestion Ten 30 speaker. While the circuit has been modified, the Vibro Champ Reverb comes equipped with Schumacher transformers just like the originals did in the 1960s. As someone who primarily plays through a Princeton Reverb, I was very curious what the differences would be between my trusty, well-loved Fender ’65 Princeton Reverb and the ’68 Custom Vibro Champ Reverb.

On paper, there are two main differences. The power output of the Vibro Champ is rated at 5 watts while the Princeton comes rated at 12 watts. The Princeton Reverb benefits from having tube-driven spring reverb, while the Vibro Champ Reverb has a digital hall reverb. They’re made to do two different jobs, but I think it’s worthwhile to see and hear the differences between these two small-box amps.

To start off, I plugged my trusty 1991 ’62 Reissue Stratocaster into both amps and set the volume on each to 3. Halfway through each track, you’ll hear me step on an overdrive pedal to show how well both of these amps take drive pedals. The pedal in question here is The Dude from J. Rockett Audio Designs, which is modeled to sound like a legendary Dumble amplifier.

This second example is where it starts to get apparent that these are two amps for two different jobs. These two tracks feature my Fender Broadcaster while both amps were to set to 5 on the volume control. To give some context, when the Princeton Reverb’s volume is set to to 5 or 6, it’s at a gig-level volume. The Vibro Champ was loud, but not too loud to get a noise complaint, and it really started to come alive when pushed a little more. The only effect other than the onboard reverb is a subtle slapback delay from my Way Huge Aqua Puss. When playing at the edge of breakup with a Broadcaster or Telecaster through a Fender amp, you just need some slapback because it’s all I ever want.

Lastly, what can we get out of these amps with some humbuckers? Both the Vibro Champ Reverb and the Princeton Reverb were cranked up to 7 on the volume control for this sample. Let me start by saying that playing at 7 on either amp was simply too loud for an apartment. Nothing makes me smile more than cranking up a amp, throwing my Les Paul over my shoulder and strumming an A major chord in first position. It just sounds like rock.

While I mainly see the Vibro Champ Reverb as a practice amp, it can be utilized in a studio or even brought to a small jam session. It’s really light and easy to throw in the car, so you don’t have to worry about lugging your 4X12 up four flights of stairs to play to 10 people. The amp really comes alive when the volume is set to around 5-6 and it becomes very dynamic. Pick lightly for a cleaner tone or dig in to let the amp bloom and distort. The Vibro Champ Reverb has a much more focused midrange while the Princeton Reverb has a rounder sound with the extra low end you get with more power. Champs of all varieties seem to have this in common with each other since they’re 5 watts and typically have smaller speakers.

Whether you own a studio, like to do home recordings, or you want to bring a small, light, and portable amp to a jam session, the ’68 Custom Vibro Champ Reverb amp is a great choice. This amp is perfect for anyone who wants the sound of a cranked-up Fender amp at home, but would also like to hear for the rest of their lives.