Guitar Parts That Made History 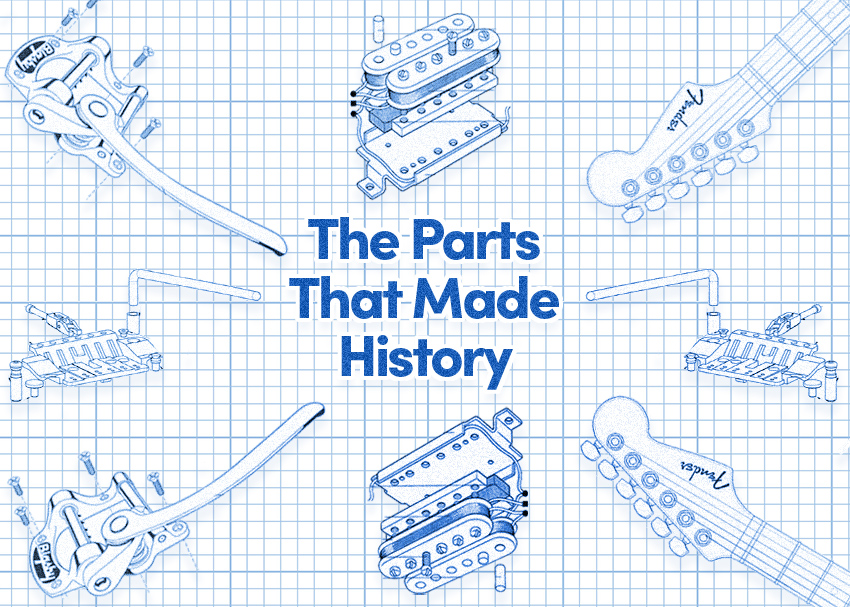 While most guitar enthusiasts recognize and revere the likes of Eddie Van Halen’s “Frankenstrat,” or Jimi Hendrix’s beloved Stratocasters, the individual components in these guitars have stories to tell as well. Whether a revolutionary piece of hardware designed by a technical innovator, or an inspired modification made by an artist out of necessity, these are the guitar parts that made musical history.

Want to try making with some new parts on your own guitar? Shop our Guitar Parts Buying Guide at zZounds!

Turns out that filling in on four spots for Eric Clapton is a pretty good way to start a career. Following Clapton’s departure from the Bluesbreakers, Peter Green rejoined the band, this time as a full-time member. He followed that up by forming Fleetwood Mac. A wholly different incarnation from the band that would release Rumors, Tusk, and Tango in the Night, the original Fleetwood Mac had a raw, soulful electric blues style, driven in large part by Green’s unmatched guitar tone.

After removing the neck pickup from his 1959 Les Paul, Green accidentally re-installed it backwards, so that the pole pieces faced the bridge rather than the fretboard. This, paired with the revelation years later that the magnet inside the pickup had also been installed backwards, likely at the factory, is what lent Peter Green his notable out-of-phase tone when using both pickups.

To this day, guitarists from your local corner bar’s blueshound to Kirk Hammett of Metallica, have coveted and attempted to recreate the signature tone of the “Greeny” Les Paul.

A favorite among country guitarists for decades, the B-Bender was invented by Gene Parsons and Clarence White. This device allows standard “Spanish-style” electric guitars to emulate the sounds of a pedal steel, or “Hawaiian style” guitar. The B-Bender is a system of spring-loaded levers either inside or outside of the guitar’s body, that work to raise the pitch of the B string by a whole step, or up to a minor third. It’s engaged when the guitar player pushes the neck down towards the floor. This causes their strap to move a lever found at the base of the neck, and that lever is connected to the guitar’s B string, thus puling on it and raising its pitch. The B-Bender, particularly when combined with the twangy tone of a Telecaster, is what most people hear when they imagine the sound of country guitar.

Perhaps even more influential than the B Bender is the tremolo system invented and named after Paul Bigsby. Like other innovators on this list, Bigsby’s life was a fascinating one. A motorcycle racer before getting into music, Bigsby would become a friend and collaborator with both Les Paul and Leo Fender. He also created one of the first solidbody electric guitars ever for Merle Travis — it was allegedly once borrowed by Leo Fender, who was working on his first such guitar at the time too. Depending on whom you ask, it looks like Bigsby’s guitar had a heavy influence on Fender, but that’s another story for another day.

Bigsby created his namesake vibrato system after Merle Travis requested he “build a vibrato contraption that works.” Vibrato systems of the time failed to stay in tune with use, and so Bigsby got to work building a better one. His first model, completed in 1951, was made from aluminum alloy, mounted directly to the guitar’s top, and used a rubber stopper to bring the arm back up and the strings into tune. Bigsby would go on to ink a deal with Gibson for rights to the tremolo tailpiece, contingent on him a few revisions to the design. Soon, demand from other manufacturers like Gretsch, grew so that Bigsby and Gibson removed the exclusivity in their partnership.

Today, the Bigsby vibrato can be seen on a wide range of Gretsch guitars, as well as Gibsons, Fenders, and any number of other brands. The smooth, subtle vibrato action of Paul Bigsby’s design is a favorite among country, jazz, and rockabilly players all over the world.

The man whose name graces countless numbers of beloved guitars, Les Paul was himself an inventor and tinkerer of guitars. His work on developing sound-on-sound recording quite literally transformed the recording industry into what we know today. His innovative use of slapback echo, reverb, and other audio effects helped popularize the use of effects among guitarists, so anyone with a pedalboard owes a bit to Les Paul.

This post is focused on guitar modifications though, so let’s take a closer look at the Les Paulverizer. This simple, yet ingenious device functioned like a proto-looper pedal that was mounted on his guitar. By this point, Les was well-known for his use of over-dubbed guitar parts in recorded tracks, but he hadn’t been able to recreate the effect on stage. The little black box, dubbed the Les Paulverizer, allowed Les to control a cassette player backstage. By layering these parts one at a time, he was able to build a song, such as “How High the Moon” and play a live solo on top of the changes, as seen in this video. The Les Paulverizer essentially allowed Les to recreate his studio magic live, right from his guitar.

Probably the most famous guitarist on this list, Jimi Hendrix brought the concepts of “rock star” and “guitar hero” to a higher plane. His most iconic guitar mod was born out of necessity: unable to regularly find quality left-handed guitars in the ’60s, Hendrix resorted to playing a right-handed guitar that was flipped over and re-strung. Of course, we all can appreciate the resourcefulness and determination, but there’s much more at play.

For one, Hendrix’s flipped guitar featured strings that went to different tuning posts than they typically would. This meant, for instance that his sixth string was wound at the farthest post, giving it more string length behind the nut, which equaled more tension and a tighter sound. Conversely, the top most strings now ran shorter distances to the tuning pegs, and the lighter tension made them easier to bend. Another factor is the Stratocaster’s bridge pickup, which is angled so that the pole pieces that traditionally pick up the three higher strings are positioned closer to the bridge, for a brighter, twanger sound. In Hendrix’s case, those lower pole pieces now picked up vibrations on the lower strings, which added more low-end clarity.

For as much as Eddie Van Halen contributed to the guitar and shred lexicon, he is also remembered for reinvigorating the hot-rodded “partscaster” movement that led to the “superstrat” boom. Arriving on the scene in the late ’70s, Eddie’s licks, played on his homemade “Frankenstrat” gave him the star quality necessary to share the stage with David Lee Roth.

By pairing a Strat-style body and maple neck made by Wayne Charvel with a PAF humbucker gutted out of his ES-335, Eddie was assembling a guitar that was much, much more than the some of its parts. In 1980, after meeting inventor Floyd Rose, Eddie added his newfangled, double-locking tremolo to his Frankenstrat. The Floyd Rose tremolo system locks strings in place both at the bridge and the nut, helping the guitar stay in tune even through Eddie’s wildest “divebomb” techniques.

Eddie’s tinkering didn’t end there — after discovering his PAF pickup was microphonic, he dipped it in paraffin wax to eliminate the unwanted noise. This technique remains in use to this day by several pickup manufacturers. In the early ’90s, Eddie invented the D-Tuna. This device attaches to the 6th string’s set screw on a Floyd Rose bridge, and allows the user to instantly shift back and forth between pitches E and D. It’s perfect for going back and forth between Drop D and standard tuning onstage.

Founded by Rob Turner in 1976, then with the prophetic name Dirtywork Studios, the company we today know as EMG perfected the active humbucker pickup in 1981 with the release of the EMG 81 and 85 pickups. Turner’s innovation was embedding an active preamp into his pickups, powered by a single 9v battery. This design helped correct many of the frustrations he was experiencing: longer cable runs were possible without signal degradation, the risk of electric shock was gone, and on his signle-coil pickups, there was no 60-cycle hum.

Originally marketed to session players like Steve Lukather seeking clearer tones, EMG pickups — the 81/85 set in particular — would soon find a home with a very different crowd — metal guitarists. This is because EMGs had another advantage: higher output, which coaxed more gain out of amps.

A major flashpoint for EMG came when Scott Ian of Anthrax began using EMG pickups. He in turn, tuned fellow “Big Four” guitarist Kirk Hammett on to them, who then shared them with James Hetfield. And once the guys in Metallica are using your pickups, the rest is history. Today, EMG pickups remain a favorite among heavy acts, beloved as ever for their high output, but also for their clarity, wide tonal range, and reliability. Without EMG’s 81/85 set, the early days of thrash would not have sounded the same, and today’s heavy, precise metal styles might not be possible.