The ’70s Are Back: Here’s How to Get a Fat Snare Drum Tone 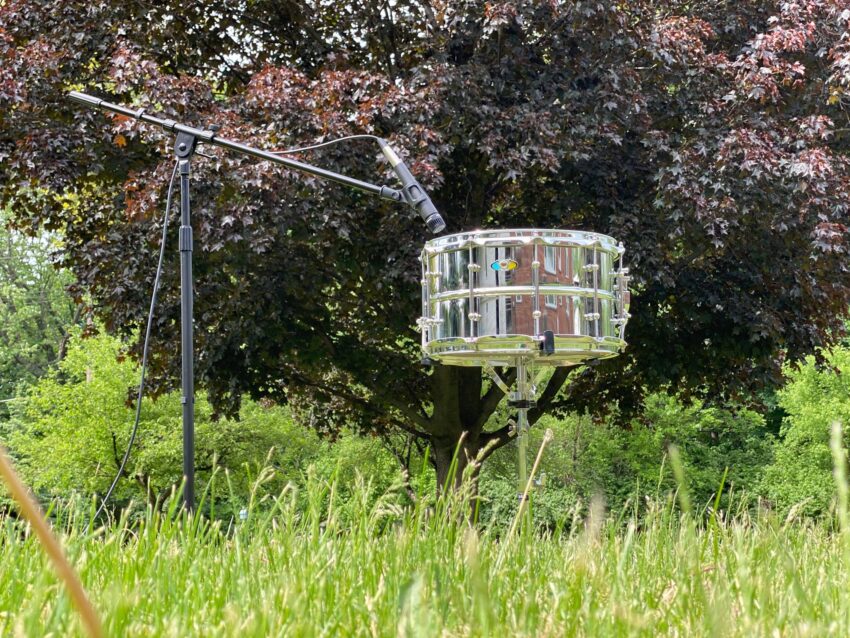 Since the dawn of popular music, fat snare drum tones have been highly sought-after. From thunderous John Bonham drums on Zeppelin records to R&B, neo-soul, and hip-hop tracks from today, that thick, fat, ’70s-esque snare tone can elevate an entire song. Read on, and we’ll show you how to get that thick snare goodness from behind the kit in your home studio!

What Makes a Snare Sound Fat?

Before miking or even thinking about how the snare is sitting in the mix, you have to select your jumping-off point. Today in-studio, we’re starting with the monster 14″x 8″ Ludwig Supralite steel snare. This is one of the most versatile snares in the studio and it truly lives up to the Ludwig badge on the side of its shell. Nearly tom-sized, the Supralite steel already gives off incredibly deep resonance. It’s so deep that if you only mounted a microphone on the batter head you’d only pickup the overtones and initial stick hit. But even if you’ve only got a snare that’s 5″ deep, don’t fret — with a bit more tuning work, you can achieve a fat tone too!

Beyond simply choosing the snare, I’ve gone ahead and tuned it to a “mid” to “mid-high” tuning. I find that with a deeper snare you get incredible articulation at slightly higher tunings, especially since this deep snare doesn’t lack for low resonant tones. But the tuning is truly your call, because we’re bringing in a ringer for lowering its pitch.

Now that our snare is selected and tuned up, there’s one more piece to the puzzle: a Big Fat Snare Drum drumhead. This is seriously the easiest way to quickly lower your snare’s pitch to that ’70s-style, thick tone in an instant. Simply slide your Big Fat Snare Drum drumhead onto your snare’s batter head, and presto — you’ve got low, thick tone. The best part about this drumhead is not only the incredible pitch variation your snare now has, but that annoying overtones disappear in an instant. It’s like the world’s biggest Moongel!

After giving your snare a good play-test, with everything sounding good to your ear, it’s time to mic the snare. As mentioned before, we’re using an incredibly deep snare today. At 8″ deep, it’s almost necessary to mic both batter and resonant heads during your recording session. That’s because the snares on the resonant head are simply too far away from a batter head microphone, so what gets picked up during play is mostly just stick attack and batter head resonance. Both of these are of monumental significance to the final product, but by themselves make for a thin, roto-tom-like tone that isn’t fit for your main snare track.

In today’s recording, I went with Shure SM-57s on both the top and bottom of the snare. The old-standby 57s are in nearly every mic locker on the planet, so chances are you can replicate these miking tips word-for-word in your studio.

A small, but important thing to remember is to check for phase between these two microphones. It won’t be perfect, but because of the distance between the two, you may experience some phase cancellation which will really throw off the vibe while mixing. It’s best to deal with this now so it won’t be a headache later.

Learn how to dial in those radically huge snare drum tones of the ’80s in this post! | Read »

Once we get into the Digital Audio Workstation (DAW) we should have a decently fat snare sound. The Big Fat Snare Drum drumhead has worked its magic all over the track and we’re sitting pretty. If this is the case and there are no glaring issues, I’ll slap a compressor onto one of the snare tracks and get to work. In this case I’m dealing with the resonant snare head. Today I’m using a Waves Audio CLA-76 which is a compressor plug-in that the great Chris Lord-Alge helped create by replicating his real, legendary outboard limiting compressor.

I’ve got got the “Attack” set at “1” and the “Release” maxed out with a ratio of “4.” As for EQ-ing the resonant head, we’ve got a bit of a nudge on the lower frequencies (around 150Hz) to accentuate the Supralite’s natural bass resonance and a hair of treble above 3 kHz to get some nice snare wire in the mix.

Meanwhile on the batter head, we’ve got a bit of EQ pushing the treble and mids of the snare above 500Hz-3kHz to accent our stick attack. I’ve also come to enjoy the sound of popping a soft noise gate on the snare mics so we can minimize any bleed and focus in on that thick tone we’ve captured. The gate setting will depend entirely on your drum setup and room, so experiment a bit until something works for you.

If you have room mics, or a simulated room with reverb on the kit, you can adjust it overall to get the sound you’d like from here on out.

Now sit back and listen to the fat tones you’ve captured in action. Your track will be lifted to new heights with this fat, ’70s-era snare tone that’s as useful as ever in today’s music.