Directly Mic Your Electric Guitar for Extra Attack. Take a step out of the box -- and into the past -- with this quick recording trick.. 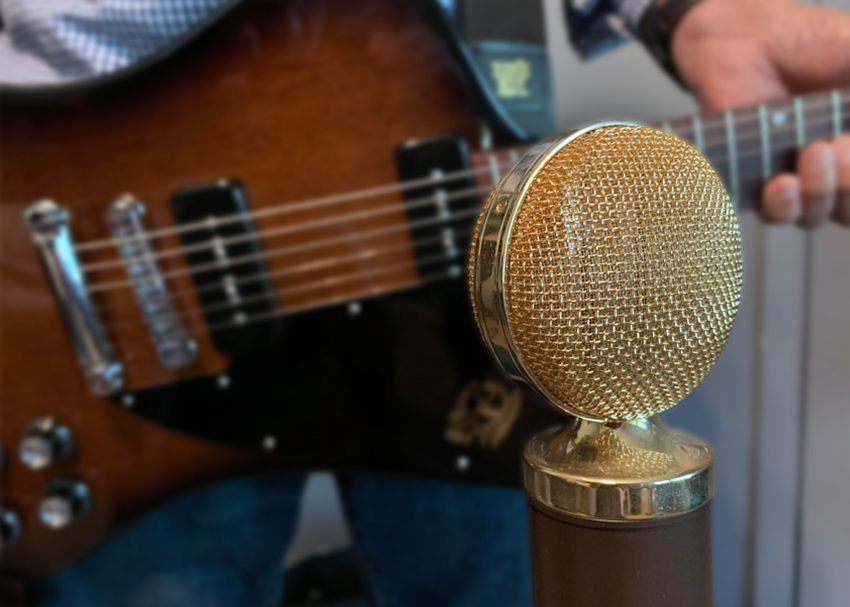 I’ll be honest, putting a mic up on an electric guitar as it is being played is one of the more unusual recording “hacks” I’ve learned about. While owing its roots to the earliest recordings of rock, this trick can help modern guitarists and producers add a bit of dimension and texture to otherwise “ordinary” recordings.

Some time ago, I read about the distinct guitar tone heard on Buddy Holly’s “Peggy Sue.” And when I say distinct, I mean to say “pretty weird.” We all know Holly was a Strat guy, but the rhythm guitar tone on “Peggy Sue” is decidedly dark. Either due to the use of flatwound strings or a stylistic choice with amp tone, the signature Stratocaster sparkle remains hidden until a solo in the middle of the song.

Bouncing on top of this dark rhythm tone, however, is a persistent, percussive pick click. As it turns out, this tone was the experimental brainchild of recording engineer Norman Petty. By capturing the acoustic sound of the Strat and mixing it with the amp track, Petty created this very unique guitar sound.

The following demo is my approximation of this recording setup. Without a Strat available, I used my trusty Gibson Firebird Studio loaded with P-90 pickups. Using the neck pickup and rolling down the tone to mimic Holly’s flatwound sound, I sent the guitar’s signal through my Universal Audio Arrow and into a UAD Fender Deluxe amp plugin. I mic’d up my Firebird with a Cascade Fat Head II and the UAD Neve 1290a preamp to create all “acoustic” tracks.

Starting with the darker amp tone, you can slide the pick track into place until it starts to add definition to the guitar’s attack. Using more or less is up to you, but I tried to get as close as I could to “Peggy Sue.”

Of course, we all can’t be stuck in the ’50s, so how would one make this work within modern contexts? For starters, one could use the hyped pick attack of the “acoustic” track to add more definition to tracks that get a bit muddy from overdrive and distortion. With the Firebird locked and loaded into the bridge pickup, I recorded a fast, down-picked riff through channel 3 of the UAD Diezel VH4 amp modeler. Just to add some extra zazz to my tone, I threw an Xotic EP Booster in the signal chain as well.

After listening to the tracks, you can hear how blending even just a bit of the “acoustic” track into the amp track adds tons of attack to the overall guitar sound, without having to mess with EQ, compression, or any other trick that could ultimately end up compromising your original guitar tone.

Another modern example would be using the “acoustic” track to make the recording sound more “real.” I know an electric guitar sound when I hear one on a recording, but that doesn’t mean that I typically spend my time with one of my ears pressed up to a speaker in my amp. Which is essentially what the modern recorded electric guitar sound boils down to. By adding the “acoustic” track to mixes, you can create a sonic environment that sounds more like it does when you actually pick up a guitar and play it.

In my final demo, I quickly tried to recreate a “live” or “real” setting. Switching to the middle position of my Firebird, and backing off the gain on the VH4’s third channel (without a boost), I was able to conjure up some light overdrive.

This time, the “acoustic” track becomes more of an independent component of the overall recording, as opposed to simply augmenting the overall guitar sound. I kept the “acoustic” track panned down the center, the VH4 panned to the right just a bit, and then added a bit of UAD Plate reverb panned a smidge to the left. By panning the various tracks this way, I tried to add a sense of being in the room with the amp, with the listener experiencing the player’s point of view.

While this trick might not work for everyone or every playing style, it’s nice to have tricks like these in your repertoire for whenever the need arises.

The moral of the story: do your research, find old recording tricks, and discover how to mold those techniques to benefit your own recordings! So now, go forth and hit that record button!