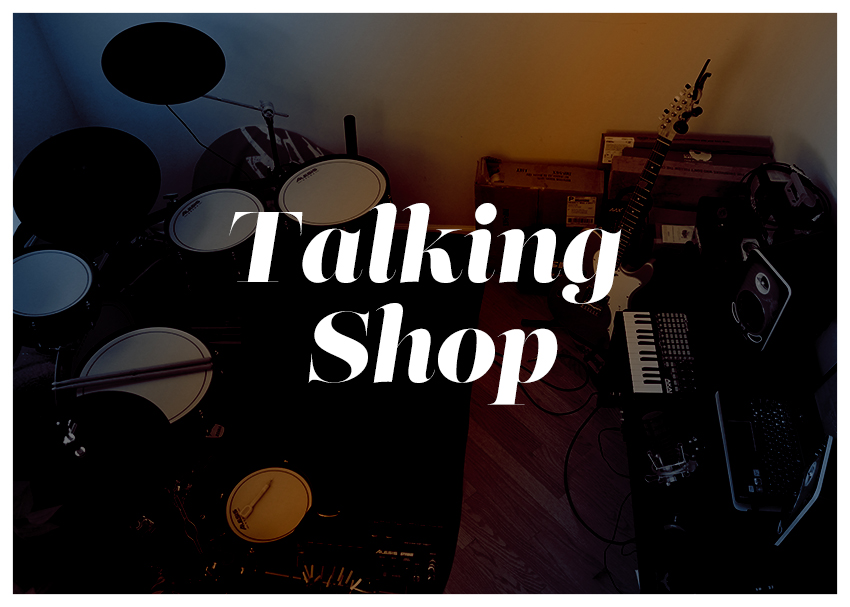 With so many of us cooped up due to self-quarantine and stay-in-place orders, we’re gaining a new appreciation for the great indoors. Musicians, producers and the like are turning to their home studios for refuge, whether starting new projects or just tidying up a bit.

In this edition of Talking Shop, we’re showcasing some zZounds staffers’ home compounds. Read on to see how we create at home, and tell us about your rig in the comments!

Truth be told, my favorite pieces from my home studio are two things: the pinata on top of my Focusrite audio interface and that window view to the outside world.

In a perfect world I try to structure my studio around easily creating electro-acoustic music. I’m at a point where I’ve really stopped caring about where my music fits in and just need an environment I can feel comfortable creating in. With that being said, lately, I find that when I’m stuck or just want to germinate an idea, these “tools” allow me to either: a) open up a window, get some fresh air, then simply point a mic outside and see what I can capture from the real world or b) take a look at my pinata and not take things so seriously. The best music I’m creating seems to come when I just stop overthinking things.

In a way, that’s why you see various MIDI controllers (for guitar or music software), my Ableton Push controller, a ROLI MPE controller, and Traktor DJ console, next to tactile instruments like my BeatRoot electric hand drum, Technics SL-B28OU turntable or a Modal Craft Synth. There’s room for both an electric guitar and violin. Modulation pedals from Alesis’ brilliant MODFX series and Eventide’s PitchFactor — effects that are instrument agnostic, make sense in this space.

Having a two-channel audio interface forces me to self-edit. If I want to record my acoustic or electric bass, (both not pictured), I have to truck something out of this space. What I’m trying to say is: I really enjoy doing more with less. And this studio space does it for me. Though, on second thought, I really love the feel of my soft bamboo desk; it sorta feels like I want my music to sound.

After being cooped up at home for a week, I decided to rearrange my room so it’s a more organized space to make music in. I feel like being able to relax in a comfortable space is essential to being as creative as you can be. My guitars and amps are the things that I spend the most time with, so I feel like it’s important to organize them with some care. It’s also pretty great to be literally surrounded by all this gear just waiting to be played. While I can cover a lot of sonic territory from all of these guitars, each of them inspires me to play something different.

The main microphone I use at home is the AKG 314 since it can be used with small guitar amps, acoustic guitars, and vocals. I also have a trusty Shure SM57 if I’m looking for a more direct sound from an amplifier. When I’m mic’ing up my old Fender Champ or tweed Princeton clones, all I need to do is hit the -20dB switch on the side of the C314 and I’m ready to go. Having one mic that can do guitar amps, vocals, and acoustic guitar eliminates the need to switch out microphones for each sound source. The microphone goes straight into my Universal Audio Arrow and into Logic.

For years I relied on the income from touring with my band and recording other bands. The nature of these recordings were typically very DIY and on-the-go, so I had to have a rig that could be packed up into a van and driven off to whenever I was needed. Today I’m no longer recording other bands but have a recording desk/space that keeps a similar DIY workflow.

Plug-and-play is the name of the game these days for me, if I’ve got an idea I want it in a DAW and ready to mess with and mix as soon as possible. So I typically run direct into my Steinberg UR-RT2 interface, with Rupert Neve Design transformers always engaged. This adds a great “console” feel to the signal, and honestly it’s Neve, so I’ll always have it on. I run Ableton Live 10 as my DAW for all tracking, mixing and mastering. Live is such a fun DAW to work in and I’ve used it since high school. It feels like family, or an old friend that I’ll never lose.

A great VST for guitar recording is IK Multimedia’s Amplitube 4, the built-in tone patches represent some of the greatest amplifiers, cabinets and effects available and they’re all at my fingertips in a matter of seconds. I love this plug-in, it’s the quickest, best-sounding way to get my ideas on “paper” these days.

When it comes to drums I run the Alesis Strike Pro Special Edition kit. The mesh heads, 20-inch kit and amazing Strike Module get me so close to real acoustic drum tones that I’ve honestly been speechless a few times hearing them. I’m either outputting my playing to MIDI or just using the main stereo outputs to an audio track in Live, both ways are incredibly fast and sound great. The feel is unparalleled.

After everything is recorded, I monitor through a variety of closed-back headphones and my Gibson Les Paul LP4 reference monitors. They sound great and look like a Les Paul, what’s not to like?

I am lucky to have a basement in my place that is a wonderful shared art space with my roommates. My roommate built this awesome two-tier desk that gives me room for my DJ gear down on the far right of the photo and my workstation on the left side of the desk.

On the DJ side, I have an Odyssey coffin case, two LP 120s and a Numark M2. On the studio side I have two Yamaha HS7 studio monitors, two Windows 10 PCs (one for recording and one for streaming), a Focusrite 18i20 on the recording computer/mac, three way USB switch to add my Mac to the setup and an HDMI matrix to route all video inputs and outputs to any monitor or input to my Elgato streaming card. The whole setup is ready to stream at any time video games, music production, live performances, and DJ sets.

I’m avoiding noise complaints while isolated at home by using the Universal Audio OX Amp Top Box to practice and record demos. I have several vintage amps which don’t come with master volume controls, and my apartment building is small enough that even my Fender Vibro-Champ becomes overbearing when cranked. I’m so blown away by the quality of the built in IRs, I’m never going back to micing up my amps! In addition, the ability to swap cabinets on the fly has lead me to discover some unexpected amp/cab combinations.

While we all tend to bemoan the constraints of commitments and responsibilities that deprive us the precious time we would rather be spending banging on the drums all day — we’re now collectively presented with the opportunity of getting to do just that. But before you clear your calendar and begin your journey of becoming the next bedroom-pop sensation who is so talented that you have people convinced you’re actually an industry plant, consider the myriad of pending tasks within the confines of your home that have been neglected for weeks, months, and possibly even years! Spring has sprung and it’s time to tidy up. By simply cleaning and organizing your living / workspace, you will find that a more streamlined, decluttered lifestyle will significantly improve your state of mind during this unprecedented time of uncertainty. There is no order to chaos that you can’t separate yourself from, so adopt good habits in the home and lift the hatch that’s blocking your creativity.

Keepin’ It Off The Streets with Korg Volca Beats

Korg’s Volca product line is composed of a roster of quality, compact instruments — each loaded with features that exceed what one would expect given their extremely modest price point. I’ve been tinkering away with Volca Beats, which is a (mostly) analog drum machine with a 16-step sequencer. Its sounds are comparable to a classic 808 and consist of a wide range of parameter controls. The MIDI functionality, in addition to its ability to be synced in tandem with other Volca modules, make it a versatile device that can be applied to recording as well as performance. It’s a perfect introductory sequencer due to its straightforward design, and it’s a great tool if you need a rhythm accompaniment for another instrument. Volca devices are all battery-powered, contain a built in speaker, and can fit in your hands like a Game boy; allowing you to take the kit to the kitchen, the bed, and even the bathroom — but remember to wash your dang hands!

The beloved Roland Jazz Chorus is a series of solid-state amplifiers first introduced over 40 years ago. Its well renowned, stereo-chorus effect and transparent, clean tone helped influence many genre-defining moments in music history. Being the first of its kind, this effect has been replicated for decades and is perhaps even more prevalent in certain facets of modern music than the era it’s often attached to. As an alternative to the flagship JC-120, I picked up a vintage JC-77 because I wanted something for home use with a small footprint that could get loud enough to leave the house if necessary — but wouldn’t break my back in order to do so. It’s a 2×10, 80W combo that closely resembles the specs of the current JC-40; albeit, it can get much louder. The JC-40, or especially the JC-22, are much more suited for home use with their lower wattage, but still operate as great pedal platforms with plenty of headroom to provide a crystal-clear, true tone. For optimal results, place cat above amp as pictured.