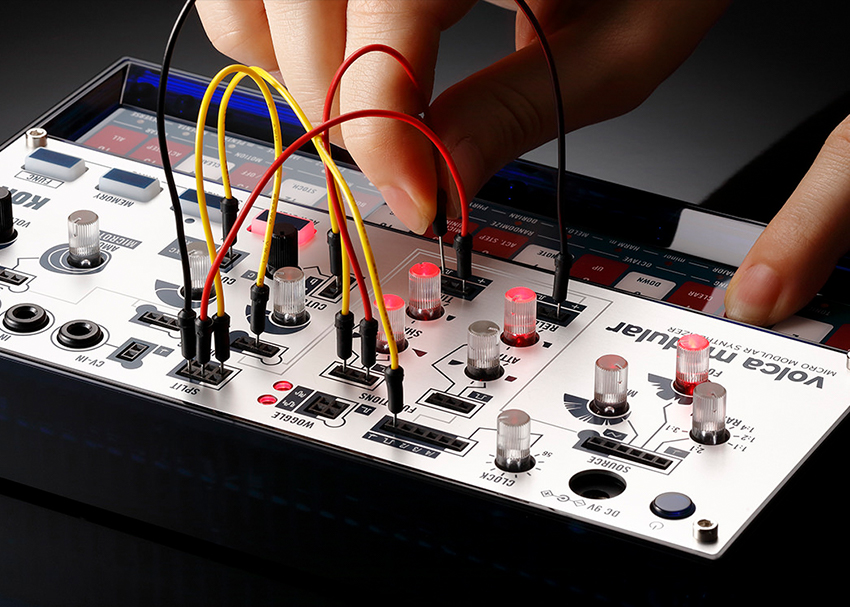 The Korg volca modular is a “micro modular synthesizer.” This means that it’s made up of individual modules: the sections of a synthesizer that perform different functions, such as selecting the sound source, adjusting the ADSR envelope (attack, decay, sustain, and release of the sound) and the effects sections. This is not as complicated or hard to use as it may seem.

On most modular synths, especially older/classic ones, you have to patch (connect) everything together with patch cables in order to get any sound at all. Without connecting the oscillator to the envelope, (and so on) you don’t get any sound. The volca modular is already wired together internally, and is completely playable without the use of any patch cables — but patching is where the fun really comes in. And the volca modular is designed to let you patch in unexpected and common-sense-defying ways, allowing the creation of really unique sounds.

Now with an “East Coast style” subtractive synth (think “traditional” with no patch cables), the oscillators generate a simple wave (usually square or saw shape), which is modified by a filter, creating most of the classic sounds we associate with the word “synthesizer.” “West Coast style” synths like the volca modular work differently: by starting with a more overtone-rich oscillator, such as FM (short for frequency modulation), and combining that with complex control circuits to vary the tone.

It’s a bit complicated under the hood, and it makes modular synths more random and harder to control — which is exactly the point. If you have a specific sound in your head that you’re trying to create, it might be hard to get there with a modular synth. But if you try, you’re likely to discover 10 other interesting sounds in the process, which you may never be able to recreate again! In my opinion, the fun of modular synthesis isn’t in diving deep into the manual and trying to figure out how to control the beast, it’s letting the lack of control take over and lead you into new, surprising territory.

So with that said, let’s stop talking about tech specs and start listening to some freaky sounds!

Volca modular in a Mix

For fun I also tried throwing the volca modular onto a synth-pop track I’m currently mixing. I didn’t use the “CV In” on the volca, which uses control voltage to sync the volca modular with your computer or other MIDI gear. Instead I just set the tempo, pressed play, and hoped that it would line up rhythmically with the rest of the track. I got pretty lucky on the first try, but it would be easy to simply record the volca modular then drag it into alignment in your DAW. Or even easier to use CV sync! Here’s the raw recording of the volca modular:

And here’s the track with the other instrumentals (please withhold judgment on this very rough mix!):