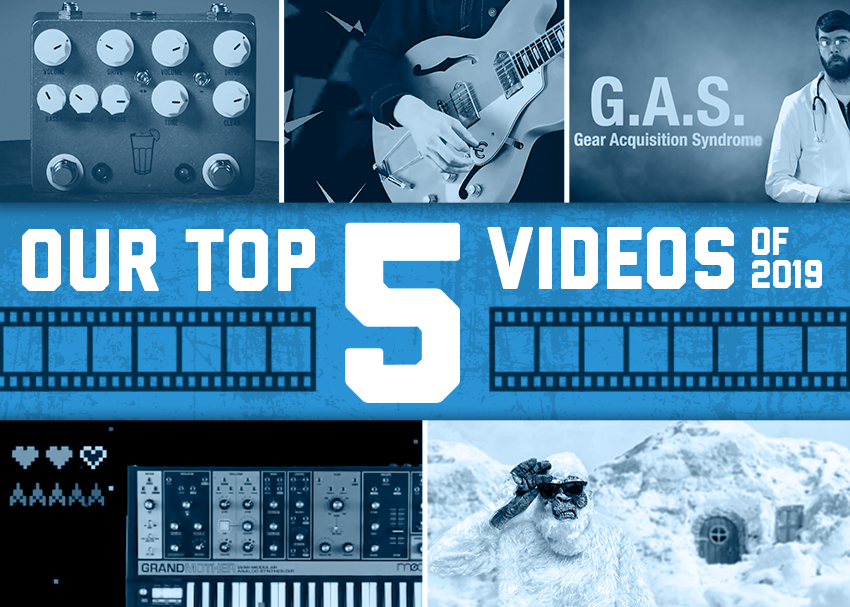 As we close out the year, we took some time to re-watch our favorite videos of 2019. Take a look back on the year with us, and go behind the scenes with production notes on each entry from our video team!

This was our most ambitious video project to date. Not only did we choose to animate a large portion of the videos, we also went the extra mile to build a physical model of the Yeti’s cave and surrounding area. The opening shot alone took a few weeks to pull off. The final version you see in the videos is actually played in reverse. As one of us pulled the camera back from the cave model, the other used a line of fishing wire to pull the FedEx truck backwards away from the cave. When played in reverse, this created the effect of the FedEx truck driving through the snow.

Tom Yeti is played by our resident composer Justin, who also composed and performed the musical tracks in each video. Our favorite Yeti videos are Dec 14, Dec 17, and Dec 10. Dec 21 was the proof-of-concept video that got the whole train rolling.

A follow up to one of our favorite entries in the Legends of Tone series, this video dives into the middle period of Radiohead’s career and dissects tracks from Kid A, Amnesiac, and Hail to the Thief. The visual effects in this video were achieved using a Critter and Guitari ETC Video Synth, which takes audio input and turns it into animated patterns, which can then be tweaked as you see fit. We then superimposed those behind Justin using a green screen.

“Knives Out” was a particularly interesting song to recreate. It’s built from layers of interlocking guitars and uses no pedals, just amp tones. Radiohead spent just under a year tweaking the performance in the original version because the sound of the track was so bare that they felt the performances had to be absolutely perfect.

Recreating “There, There” also led to an interesting discovery. The tuning used for that song – DBDGBE – is a strange combination of drop D with a raised fifth string. Several of the guitars are distorted using the recording preamp, especially the solo.

I really enjoy demo videos that put gear in the context of a song versus a tutorial-style video that explains controls and features. These kinds of videos are usually the ones that spark my initial interest in a product.

Our process for choosing gear for a Perfect Pairings video usually revolves around what’s new and exciting. The Grandmother is one of my favorite synthesizers to be released in the last few years. It’s fully analog, reasonably priced, and encourages experimentation with its semi-modular format.

I felt that some kind of a delay pedal would be a great complement to the Grandmother for the purpose of our video. Since the Grandmother is monophonic, a delay would help to add some depth and texture to the stacked layers of synth sounds created with the Grandmother. Coincidentally, Moog would go on to add a stereo delay to their next release, the Matriarch.

The folks at Eventide sent us the Rose ahead of its release and it was initially the colorful old-school aesthetic that made me think, “That will look really cool next to the Grandmother.” As soon as I spent some time with the Rose I learned that there was much more going on under the hood than I realized. The Rose provides an insane amount of modulation options and awesome features like reverse delay and the delay multiplier. It turned out to be a great companion to the Grandmother for adding either simple delays or wild modulated effects.

The sound of the Grandmother and Rose immediately made us think of old-school video games, which is what led to the arcade machine visuals. The Critter and Guitari ETC came in handy again here for creating 16-bit backgrounds.

Gear Acquisition Syndrome is a serious medical condition that affects millions of musicians each year. zZounds can help.

zZounds employees Kevin and Sean star as the doctor and patient.

The JHS Overdrive Sampler video was a fun tour de force opportunity for us to experiment with the myriad gain stages the 4 pedals provided. Going into it, I knew the track would need to have several textures and vibes that would play into each pedal’s distinct voice. In my head I was thinking Zappa to Iron Maiden guitar harmonies to Steely Dan and back again. I really enjoy this track and considered it one of the more exploratory originals I made of this year. Great overdrive tones!