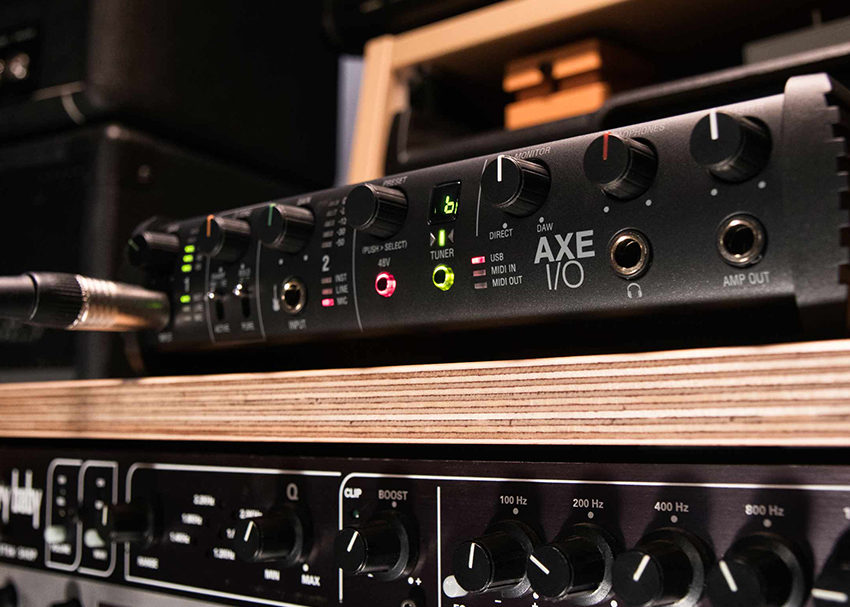 IK Multimedia’s new AXE I/O interface (endorsed by Joe Satriani!) is aimed at the recording guitarist, with the goal of making it easier and faster to get a great tone — especially on direct injection, or DI, recording. To that end, the AXE gives you a few key options for tone shaping:

1. A Passive/Active pickup selector switch lets you select either option based on whether your guitar has active electronics/pickups. If it does, the Active setting will bypass unneeded gain stages, keeping your signal as pure as possible.

2. Another switch on the front panel gives you two input options: Pure and JFET. The JFET setting gives your DI sound a bit more warmth and some added harmonics by passing your signal through a JFET circuit, while the Pure setting leaves your signal as-is, for a clean, transparent sound. This is a pretty subtle difference, but still noticeable, especially if you’re planning on layering several guitar tracks. Note: the JFET option only works when the pickup selector is set to Passive mode.

3. A variable-impedance Z-Tone control knob is where you can make the biggest difference in your tone with the AXE I/O. The Z-Tone circuit lets you continuously shape the impedance load on your pickups, which can make for some drastic differences in tone. Reducing the impedance, by rolling the knob clockwise (turning it up), tends to thicken the sound up, giving you less treble but a bolder, meatier character. If you roll the knob back, increasing the impedance, you get a crisper, sharper sound with more attack and treble. This lets you take some of the edge off your DI guitar tracks, which can often be too harsh in the high end and not thick enough in the midrange. Instead of using digital post-processing, you can now do that right at the source — your pickups — for a more natural sound.

Another interesting feature of the AXE I/O is the separate Amp Out on the front panel, designed for easy re-amping without the use of a re-amp box. The Amp Out is optimized for the impedance and level that guitar amps require, minimizing buzzing noises and other problems caused by trying to re-amp direct from a standard interface. In addition to re-amping guitars, the Amp Out is also great for running any track through a stompbox effect pedal (or a chain of them).

The AXE I/O has a tuner built in with a display on the front panel, so you can tune directly on the AXE without loading up a plugin or program on your computer, or disconnecting to use a separate tuner.

The AXE I/O also includes some of the standard stuff you’d expect in an interface, like MIDI I/O, 48v phantom power, and main and headphone outputs.

To get an idea of the difference that the AXE I/O makes to DI guitar tracks, we recorded a few different guitars through it with different front panel settings, and we were impressed with the results. All of the below tracks were processed with IK’s own AmpliTube 4 amp simulation software, except the acoustic tracks, for which we just used a small amount of EQ and compression.

First up, a few tracks recorded with a Gibson Les Paul Standard with BurstBucker pickups.

For our final set of Les Paul tracks we did some low, palm-muted riffing. Both have the JFET switched on. “LP 8” has the Z-Tone all the way down, “LP 9” has Z-Tone nearly all the way up.

Moving on to bass — our next set of demo tracks was recorded with an Ernie Ball Music Man Stingray, which is a lively-sounding bass that puts out a very bright tone with plenty of treble. Since it has active electronics you get a smaller tonal variation from using the Z-Tone, but the change is still audible. We used the “Active” pickup option on the AXE I/O here, and since we did the JFET is no longer in the equation. “EB Bass 1” has the Z-Tone all the way down, “EB Bass 2” has it almost all the way up.

Next we tried some tracks using a Mexico-made Fender Precision Bass, switching back to Passive pickup mode. “P Bass 1” has Z-Tone at “0” (all the way down) with the JFET off, and “P Bass 2” has the Z-Tone most of the way up, with the JFET on. Turning up the Z-Tone really created a nice, fat bass sound:

For fun we also hooked up a US-made Fender Elite Telecaster (with single-coil pickups) and did a sweep on the Z-Tone knob, with the JFET switch set to “on”. In this clip you can hear the sound thicken (and the volume drop a bit), as we sweep the Z-Tone up (lowering impedance). Then, as we sweep the Z-Tone back down, you hear the treble and string attack becoming more pronounced again:

To get an idea of what Z-Tone can do for your acoustic sound, we plugged in the new Taylor Grand Pacific 717e and did another sweep of the Z-Tone knob, with the pickup selector set to Active, since this guitar uses active electronics. Like the Ernie Ball bass, you get a less dramatic difference in tone due to the active electronics, but you can still hear the sound thicken up as we start sweeping the Z-Tone knob up in the middle of the track, and then you can hear more string attack and treble coming back as we restore the Z-Tone back to its lowest setting toward the end.

So there you have it: as you can probably hear, the extra controls afforded by the AXE I/O do make an audible difference to recorded DI guitar tracks. If you’re getting sick of harsh guitar sounds that need a ton of post-processing EQ and filtering to sound natural, the new AXE I/O from IK Multimedia may be exactly what you need.

For more of what the AXE can do, check out this demo video from Joe Satriani: