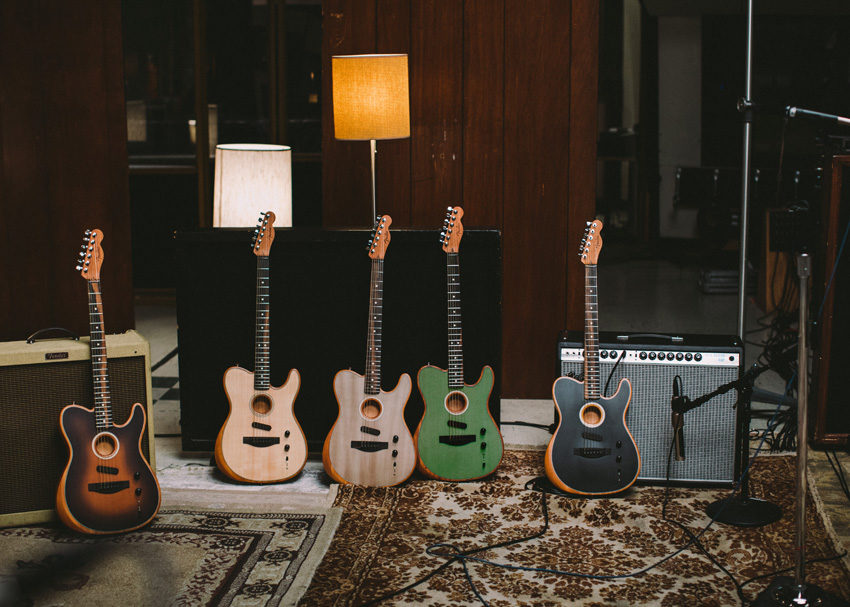 But, it doesn’t look like one of those futuristic, high-tech guitars either. That was by design as well. We spoke with Billy Martinez, VP Category Manager of Fender’s Acoustic Division, to get the story of how this category-defying guitar came to be.

Martinez spent his first three years at Fender refining and defining what the American Acoustasonic Telecaster would be, and strategizing a marketing plan behind it. As he puts it, the guitar’s successful launch was the best work anniversary gift he could have asked for.

Bringing the Past Into the Future

Guitar players often get a bad rap for being “stuck in the past,” which can sometimes make it difficult for innovative guitars to get much traction. Thankfully, Fender has nearly 70 years of history to draw inspiration from.

“One of the reasons we chose to use the Tele was because it’s an iconic shape,” Martinez said. “The idea was, if we’re gonna get acoustic players to adopt it, it has to have that organic feel to it.”

Of course, a big part of the organic feel of acoustic guitars comes from their natural resonance. That’s where the guitar’s SIRS, or Stringed Instrument Resonance System, comes into play.

Since the American Acoustasonic Telecaster’s body isn’t as deep as a typical acoustic guitar, its soundhole doesn’t operate the same way, either. Where most soundholes simply provide a place for sound to exit after resonating through the body, the Acoustasonic Telecaster’s soundhole “waterfalls” into the body, then waterfalls again before touching the bottom of the body. This helps to direct the sound waves so they are projected back out, more like how a speaker cone pushes out sound.

Acoustic-electric guitars with piezo pickups are a popular tool, but Fender wanted to the American Acoustasonic Telecaster to push the boundaries of player expectations and offer multiple acoustic tones to suit any gig or playing style.

Martinez’s past experience in the acoustic guitars category at Guitar Center gave him the expertise to decide what sounds the American Acoustasonic Telecaster should be capable of. The resulting Acoustic Engine, a collaboration between Fender and Fishman, appeals to any guitarist, offering accurate models from a booming mahogany-and-spruce dreadnought to a compact maple-and-spruce parlor guitar.

“We knew we didn’t want to just slap [an existing] system on this guitar,” Martinez said. “We wanted to really sit and work with them and create a whole new platform of acoustic electronics.”

The models sound incredible, but the American Acoustasonic Telecaster really makes this digital modeling next level via an analog blending control. Each position on the selector switch features two models, and players can blend in the desired amount of each one in the mix for tones that would be impossible on traditional acoustic guitars. The on-board magnetic pickup can also be blended in with acoustic models for rich acoustic-electric tones.

But for guitarists to work all these tones and blending into their rig, it had to be intuitive. The five-way and three-way switches on Fender electric guitars quickly become second nature to most guitarists, and Martinez wanted the American Acoustasonic Telecaster to feel the same.

“Once you plug it in, how can we give that player the world with a five way switch and a mod knob?” Martinez said.

Answering this question proved to be the biggest challenge for the design team, and later, its greatest reward. Fender engineers partnered up with the experts at Fishman to collaborate on a totally unique electronic system.

“And we were like, well you have a borderline hollowbody Telecaster that has a five-way switch and a mod knob, so basically you get one knob and five switches,” Martinez said, recalling the pitch to company president Larry Fishman.

What Fishman came back with was a seamless marriage of analog and digital technologies, and one that cemented the American Acoustasonic Telecaster as a truly innovative, yet player-friendly guitar.

“He [Larry Fishman] came back to Brian and I and basically said ‘thank you for giving me this opportunity, because this reinvigorated my entire company and my entire engineering staff because you asked us for the impossible.'” Martinez said.

We get the feeling that the American Acoustasonic Telecaster will reinvigorate the playing of many guitarists. Its a beautiful instrument to behold and offers playing experience like nothing out there.