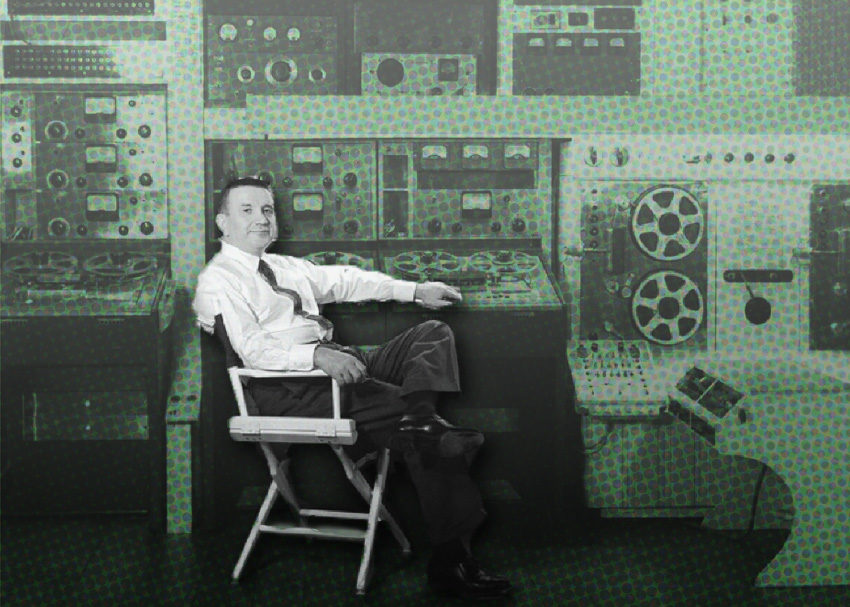 Born in Brooklyn and a graduate of the Julliard School of Music, synth pioneer Raymond Scott began his career in music in 1931, playing piano for the CBS Radio house band. In 1936 Raymond Scott put together a six-man “quintet” (Scott liked the word quintet, although his band had six members). The Raymond Scott Quintette quickly became well-known through recording and live shows, both onstage and on the radio. During this early stage in his career, Scott was already creating new sounds by using the recording studio in new ways, such as playing a trumpet through a bucket of water to get a gurgling, underwater effect, and putting a seashell near the microphone to get a distant, far-away sound.

“He had so much imagination, and so much intuition—this funny intuition that some people have—that he could sort of fish around and get something to work, and do exactly what he wanted it to do. Obviously not everybody could do this. It took a huge amount of money, and a huge amount of imagination. And an impressive amount of craziness too!”

But it was later, in the 1940s, that Scott began to really experiment in depth with electronic music. In 1946 he established Manhattan Research, with the purpose of designing and building synthesizer components which were cutting edge at the time, including custom ring modulators, filters, and envelope shapers. Scott’s inventions were at the forefront of electronic music development, including an electromechanical sequencer, and a self-composing synthesizer called the Electronium.

During the last few decades of his life, Raymond Scott became more secretive, spending most of his money and time working on new electronic inventions. From 1971 to 1977 Scott worked as the director of electronic music and research for Motown Records, however no recordings from Motown at that time have been discovered which use Scott’s electronic instruments.

More focused on creating his eccentric electronic instruments than marketing his ideas and music, Raymond Scott remains a somewhat-obscure figure in the history of electronic music, less known than Robert Moog for example, who was greatly influenced by Raymond Scott. Moog was building and selling theremins out of his parents’ basement when Scott contacted him about using “the electronic sub-assembly of the Theremin to incorporate in this instrument he called a ‘Clavivox.'”

After a mind-blowing tour of his basement full of knobs, dials, and vacuum tubes, Scott described to Moog what he was trying to build. Months later, Scott called him back to show him the prototype that he had built, an early version of the Scott Clavivox, which is essentially a theremin that is controlled by a keyboard.

You can lose a lot of time by digging further into the Raymond Scott story, from his orchestral compositions and their use in animated programs like Looney Tunes (and The Ren and Stimpy Show!) to his completely singular world of electronic sounds. On the synth/electronic side, Scott’s work includes some of the most aurally interesting radio commercials ever produced — for example “Lightworks”, a masterpiece which was later sampled by hip-hop producer J Dilla on his magnum opus, the 2006 album Donuts.

Another pioneering work Scott produced is the Soothing Sounds for Baby series — a three-album collection of electronic sounds meant to be relaxing for babies, divided into three different age groups (1-6 months, 6-12 months, and 12-18 months).

No matter what genre you work in, the music of Raymond Scott is always a great reminder that there are new audio worlds out there to explore, if you have enough patience and imagination.