How Skyhook Uses Studio Gear to Livestream on Twitch 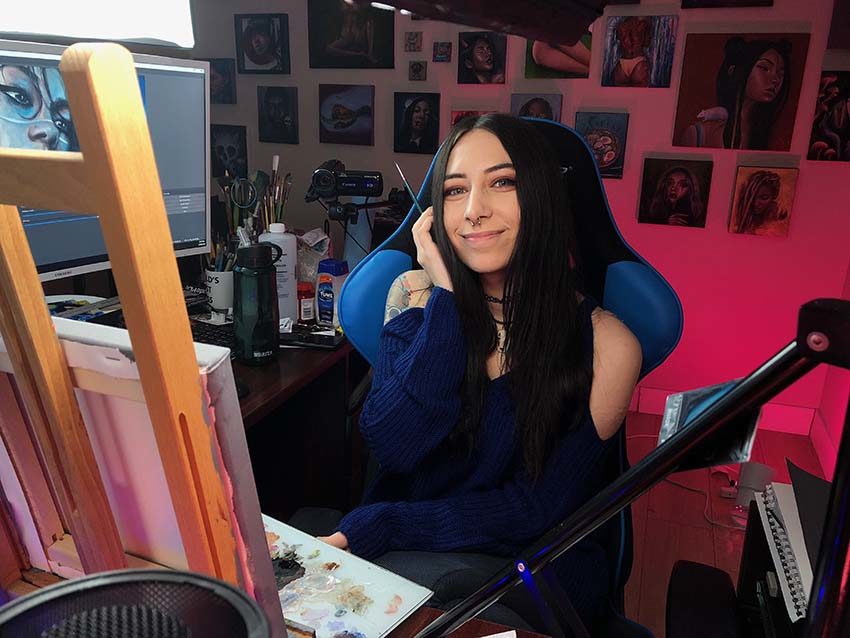 Livestreaming on websites like Twitch, YouTube and Facebook have transformed the way creative content is taken in by viewers all over the internet. Creators can now engage directly with fans through live chat and publish the content that best fits their demographic instantly. Sam Crescenzo is a creator on the popular livestream hosting website Twitch.tv, who creates art live for her viewers under the channel name Skyhook. On a typical stream you will see her use oil paints on canvas and engage in conversation with the chat while painting, which feels similar to a group of friends hanging out in an art studio shooting the breeze. This content creation is just one part in the grand design of her stream though, studio quality sound is just as important for the stream to come across as professional and helps keep the audience immersed in Skyhook’s art. Skyhook’s journey to a career in streaming began on the streaming site Periscope. “I started with hanging out with people I met online through Periscope. Trying to play games while holding my phone up to a computer screen wasn’t really ideal. Everyone suggested that I make a Twitch account… A little later that year in 2015 [Twitch] Creative was launched and that’s where my love for streaming and my love for art got combined,” Skyhook said in an interview. This set up a network to help launch her channel, and following Twitch’s increased promotion of their creative category along with becoming a partnered creator, streaming and art became her full-time job.

Gear Behind the Stream Skyhook’s stream starts on canvas and ends on the audience’s computer screen; but in-between it goes through many hardware and software platforms so it can be output to Twitch in the best possible quality. On the software side, Skyhook uses an open-source program called OBS (Open Broadcast Software.) This allows the stream to be captured and uploaded live to the hosting site Twitch.tv. Think of this like a producer’s DAW (digital audio workstation) such as Ableton, ProTools or Reason. Much like a DAW, OBS can utilize plug-ins and effects to satisfy any production aspect a streamer needs. Skyhook for instance uses OBS “noise suppression” and “noise gating.”

As for hardware, Skyhook uses a tactile mixer to EQ her vocal. More specifically the Behringer Xenyx q802USB mixer which features a bi-directional stereo USB audio interface that she connects to her computer which feeds into OBS. Connected to her mixer is an Audio-Technica AT2020 studio condenser microphone, this uses phantom power supplied by the Xenyx mixer and provides a clear and crisp vocal that keeps production quality up. Skyhook said audio quality is really important to her streams.

“I think the quality has eased my mind a bit and let me focus on other aspects of my stream. Before I used to be concerned about peaking since I yell a lot when I’m excited and it would prevent me from wanting to just react how I naturally would.”

Skyhook has carved out an active community and fostered a niche in the Twitch creative scene, due in large part to her personality and art skills. But Skyhook’s passion for streaming is another pillar of her community and streaming career. “My absolute favorite thing about livestreaming my art is that people get to see the entire process. I think actually watching me put 20+ hours or more into a painting over days and having people hang with me during it really puts into perspective how much goes into painting and making art. They get to see when I fail and struggle and all the in-betweens that aren’t really exposed when you see just a finished painting. I think it helps people connect to my art in a way that was never possible before.” Skyhook said.

For more information on Skyhook and her art, visit Skyhookart.com or catch her live at Twitch.tv/Skyhook.

May 9, 2018Nicholas
4 years ago Studio Solutions