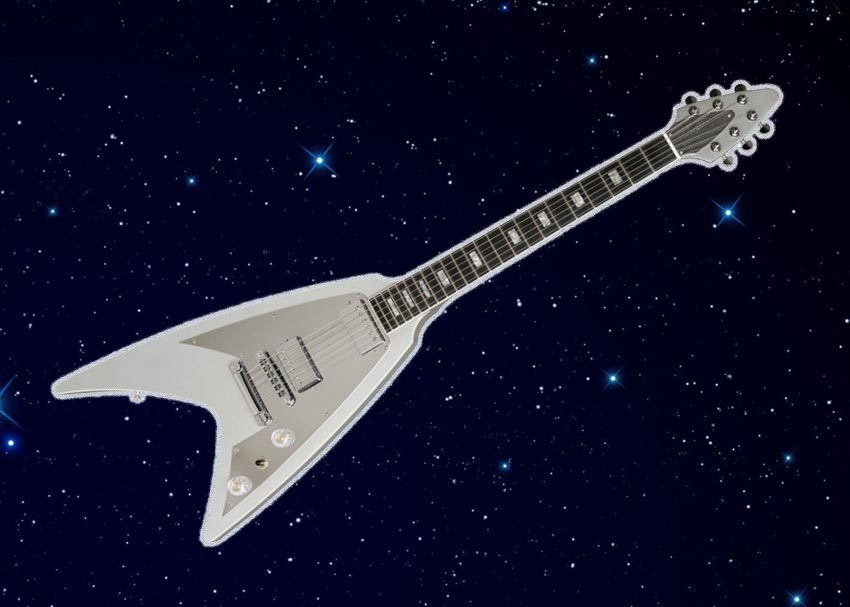 Teased at this year’s CES show, Gibson’s Modern Flying V has surfaced on the company’s website. Available in three lacquer “prism” finishes (ebony, gold and silver) with hardware and pickups to match, the Modern Flying V features a contoured maple top on a mahogany body. A slim C neck is topped with a 22-fret Richlite fretboard, evoking Gibson’s Custom look.

Gibson says the Modern Flying V is constructed of solid, yet lightweight woods, but we’re interested to see how well-balanced it is. Of course, the original Flying V introduced in 1958 was radical for its time, discontinued after a year and then tweaked and re-introduced in 1967. The Modern Flying V is the latest incarnation of the often-modified model, and fits in line with Gibson’s emphasis on modern guitars with their “Future Tribute” and High Performance lines.

Yet it’s arguable if the Modern Flying V is truly focused on the future, or is more of a tribute to a retro-stylized future. Many have compared the slouched curves of this V to the famous Starfleet insignia from Star Trek. Others have likened it to a rare custom Jackson Roswell Rhoads. Either way, it’s been fun to see Gibson try out some new model shapes through their Custom Shop, like the Modern Double Cutaway that surfaced last year, also at CES. Might we say a Modern Explorer next year? A Modern Moderne? Or something completely new? Only the future knows.

What is NAMM?To DI, or not to DI
Comments: 3