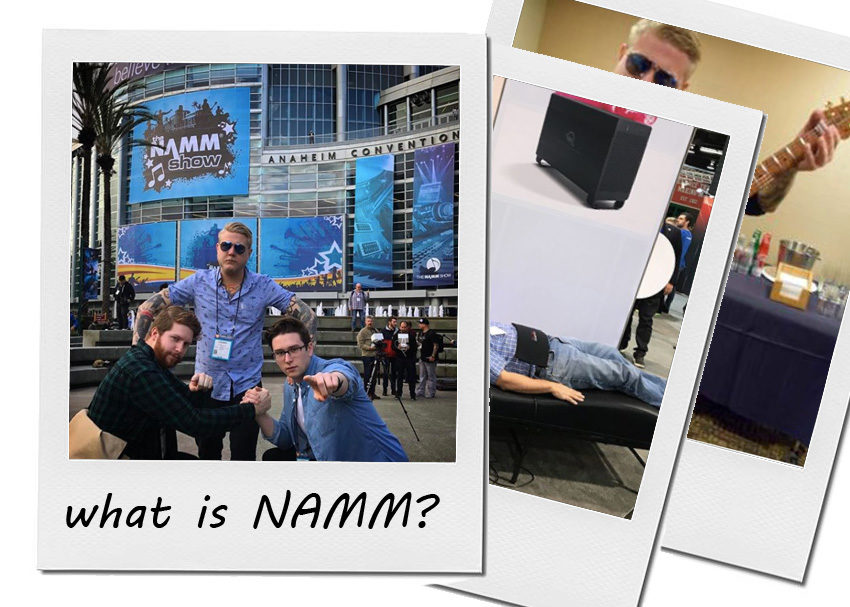 A few weeks ago, I and a few of my fellow zZounds cohorts jumped on a plane to head to the sunny winter wonderland that is Anaheim California for the 2018 NAMM show. If you in any way keep up with music gear, then I’m sure you’ve heard of this event. Be it a slew of cell phone pictures on social media, flyers from brands on where their booth is or the unending YouTube playlists of a rep scream-talking product specs over a cacophony of music-related noise, there’s no avoiding NAMM.

Before I started working at zZounds I knew of NAMM, but like many, I never really knew much beyond it being, “that place with all the demos.” As you can gather, it’s a trade show; but why is it so important? Sure, there is a lot of new gear there that people want to show off, but why is a NAMM product launch so special? With more than a few NAMM shows under my belt, I now know what it’s all about and understand its importance.

The NAMM association was initially founded in 1901 when members of the National Piano Manufacturers Association of America formed the National Association of Piano Dealers of America. (the official NAMM moniker came later, in 1919 to be more inclusive of instruments than just pianos) A year later they set up the first trade show in a Baltimore YMCA and charged a hefty $5 dues fee for retailers to participate. With just a small room and a handful of booths, that early show would be dwarfed by the behemoth NAMM has become, now consuming the Anaheim Convention Center. This year, it even spread out into the newly constricted North Building. Slap bass and tapping solos didn’t exist yet so this must have been a very soothing show.

From there, NAMM slowly grew in size and importance, going beyond just a few piano dealers and the stores they invited to building itself as a center of influence in the industry. in 1915 people got the first real “NAMM celeb sighting” when Charlie Chaplin did a skit to demo pianos. They hit a few snags during the Great Depression and skipped some shows, but by 1946, NAMM had grown enough to be moved into the Palmer House in Chicago, a lavish downtown hotel that was initially built as a wedding present by a wealthy businessman and real estate tycoon. The oldest known photo of a NAMM show, this picture from 1904 was found on Ebay by a NAMM historian.

From there it bounced around different locations, from New York to Miami to St. Louis, finally landing a permanent home in Anaheim in the ’80s. The smaller Summer NAMM show in July set up shop in Nashville in ’93, but Winter NAMM has always been the main show.

Over the past 3 decades, NAMM has formed into what it is today, the world’s biggest music instrument, equipment and technology trade show, containing more than 100,000 registrants from 139 countries and regions commanding $10+ billion in buying power.

Why NAMM is Important

If it makes a sound that at least one person can categorize as music, it’s at NAMM. Having walked the 1.8 million square feet of the Anaheim Convention Center a few years in a row, I can speak from personal experience. The show gives you a chance to get some first-hand experience on basically everything new from everyone. You can try out the new line of Fender Guitars, a pedal from a small DIY builder, or someone’s garage invention that may, or may not, be the next hit music gadget.

With the show being restricted to those within the industry and their guests, it has long been the main place for gear manufacturers to reveal new products before they hit the market. Often manufacturers will even show off prototypes that are still early on in development, leading to the oft-heard unofficial acronym for NAMM: “Not Available, Maybe May.” Lately though this tide has been shifting some. 2018 saw a lot of brands officially release gear before the show. With everyone launching new products during the week of the show, many brands, especially smaller ones, can find themselves lost in the shuffle.

There is a flood of coverage for NAMM once the show opens its doors and understandably people can get burnt out on it quickly, especially someone with a more casual interest in music gear. I know I often find myself watching NAMM videos, but dragging the cursor along to skip through until I see a certain spec of the instrument I’m interested in being covered or a snippet of someone actually playing it.

Another factor is the advancement of technology. For much of the show’s history, NAMM was really the only good place to launch a product. Yet, like so many other things, the internet has changed that.

It’s my somewhat-educated guess that in the future we will see more people launching products in the months and weeks leading up to NAMM, and then using the show to give people a real “in-person” glimpse at the gear. Which I say is still a great way to do it. Brands can create their own narrative for their new products, and then use the show to push it into the narrative of the press and retail networks to push it and further build the hype. Black Mirror teaser, or the future of NAMM?

What NAMM Means to the Industry

While a lot of business is still done at NAMM, it’s also considered somewhat of an “annual family reunion” for the industry. A lot of my time at NAMM is spent taking meetings, getting coverage of new products, etc., but the other half is just talking to friends of mine in the industry. This is the part of NAMM most people outside of the industry don’t see or understand as much. Pretty much everyone in the convention is a musician after all, and it’s one of the few times you get to see your friends at other companies and talk about what you both have in common, the love for music gear.

I can’t count how many times I’ve talked to someone who works for big guitar brand-X who when we start talking gear, reveals he has a giant collection of big guitar brand-Z instruments at home. This is especially true in the world of pedals. Being a much smaller and (relatively) new market, everyone is incredibly friendly with each other, and after hours you can catch people from different companies swapping build specs and sharing ideas over a drink. The author, who is clearly a true rebel, lone wolf, and bad boy.

Sure, in some ways NAMM is like the world’s largest music store and after a few days of being bathed in a unending roar of shred guitars, slap bass, and the wash of drum cymbals as I push through crowded isles of people I can get a little jaded, but then I realize I’m in California in January walking around, seeing the coolest music gear, spotting famous musicians and celebs, and talking to a bunch of good friends I don’t get to see enough.

While we at zZounds can never fully translate the entire experience to people, we can do our best to give you an idea of what it’s like, and show you the stuff you really care about, new gear.