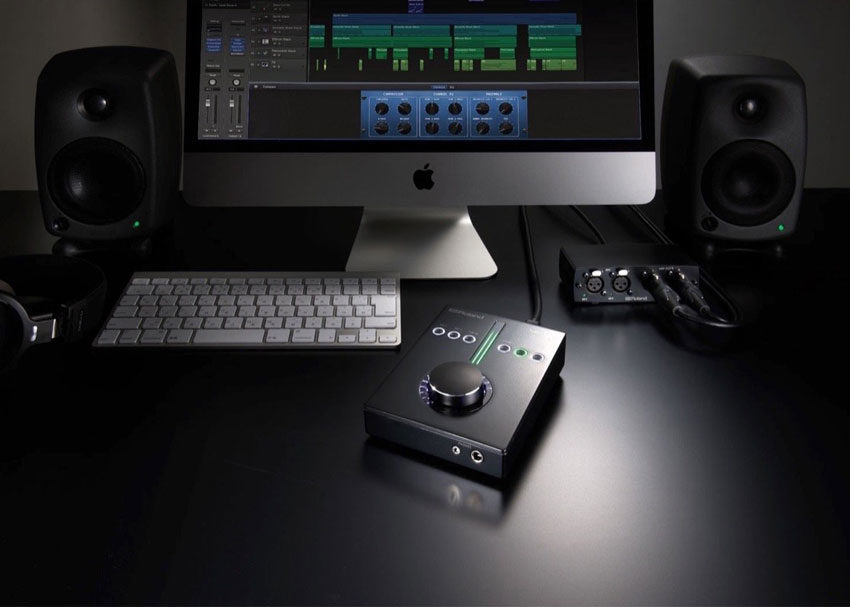 Ready to set up a home studio and start recording your music? A digital audio interface is a good place to begin building your rig. If you’ve already got a computer, one of these boxes will let you connect instruments and microphones via a USB port, and start capturing audio and MIDI into recording software (which typically comes bundled with the audio interface). In professional recording studios, you’re likely to find interfaces costing multiple thousands of dollars, but you don’t need to shell out big bucks on your home studio’s very first audio interface. Here are a few of our favorite options under $100, $200 and $300.

Unlike many audio interfaces in its super-affordable price range, the PreSonus AudioBox 96 gives you not one but two XLR mic preamps. That means you can record two mics simultaneously to separate tracks — great for capturing a stereo pair of microphones, or for recording a podcast with a host and a guest. The AudioBox 96 also has 5-pin MIDI input and output jacks, so you can plug in any MIDI keyboard or pad controller and record MIDI along with audio. Along with the AudioBox USB 96, PreSonus includes a free download of their Studio One 3 Artist DAW software, plus their “Studiomagic” plug-in suite, ready to install on your Mac or PC. The AudioBox has been a home-studio standby for ages, and PreSonus relaunched this model in 2017, adding 96 kHz A/D converters for recording at high-resolution sample rates. If your budget is $100, this USB-powered interface certainly gives you plenty of bang for your buck.

In addition to the 2 mic preamps, you also get 2 line inputs, and a total of 4 line outputs — great for feeding two pairs of stereo monitors or connecting outboard gear. That’s in addition to two dedicated headphone outs. And when it’s time to go mobile, you can leave the breakout box at home and take the Super UA’s main tabletop unit in your bag.

More than just a pretty face, the Roland Super UA offers audiophile-worthy playback resolution, with support for both 192 kHz/32-bit floating point PCM playback, and 2.8 MHz/1-bit DSD (Direct Stream Digital) — an esoteric format that’s used in SACD (Super Audio Compact Discs). Suffice it to say that the Super UA lets you hear your DAW’s 32-bit audio engine in great detail, and it delivers a whole lot for under $200!

Sure, you could get a $300 USB audio interface with more channels of I/O than the Audient iD14, but if you’re after quality, not quantity, this desktop interface is a fantastic choice. The Audient iD14 gives you two Class A mic preamp channels with 66 dB of clean gain and individually switchable phantom power, and Burr-Brown AD/DA converters to help you capture and reproduce an accurate picture of whatever you’re recording. Channel 1 also has a dedicated JFET DI input right on the front panel — perfect for plugging in your guitar as you sit at your studio desk. And if you really need more inputs, on the back of the iD14 you’ll find an 8-channel ADAT optical input, so you can add an outboard mic preamp (or eight) and expand your studio. For outputs, Audient keeps it simple with a pair of balanced line outputs to feed your monitors, plus a dedicated stereo headphone output in front. The large volume encoder, which Audient calls the iD knob, can function as a virtual scroll wheel — use it to navigate in your DAW, or hover your mouse pointer over plug-in parameters and use the iD knob to make precise adjustments, or simply use it to control monitor volume. Ladder LED meters on the top panel round out the features of this great-sounding under-$300 interface.