Rockers with a Cause: the Dayna Clay Project 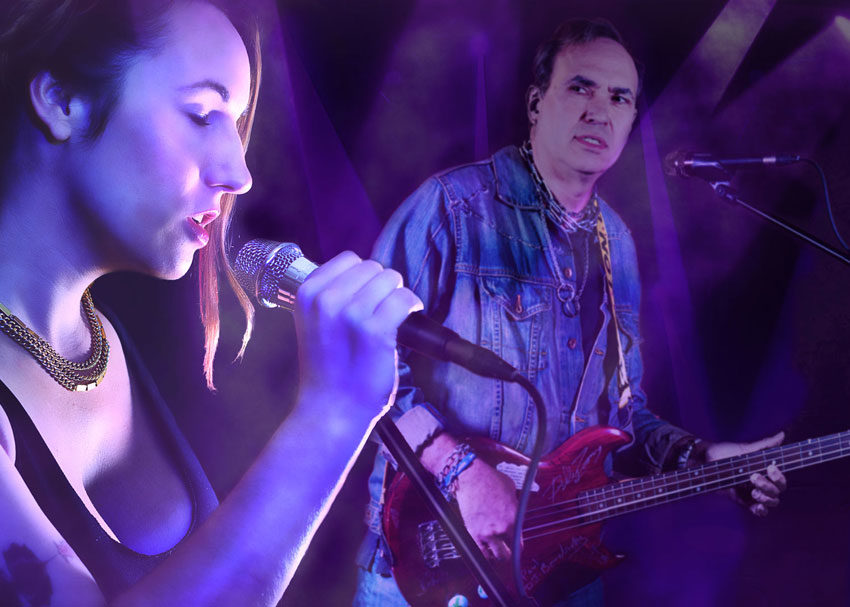 “My music is the spiritual expression of what I am — my faith, my knowledge, my being…When you begin to see the possibilities of music, you desire to do something really good for people, to help humanity free itself from its hangups…” — John Coltrane

When it comes to coping with feelings, many people turn to music — writing, performing, or even just listening — as a form of expression. As Coltrane states, music can be much more than just a secret diary — it can be a way of creating positive changes in the world. And that’s just what Paul McComas and Maya Kuper are working towards with the Dayna Clay Project and UNPLUGGED: A Survivor’s Story in Scenes & Songs. I sat down with the two to talk about the Dayna Clay Project, Unplugged and how music and storytelling can change the world. Maya Kuper with her keytar and Paul McComas with his bass are the Dayna Clay Project. (photo: Nina D’Angier)

UNPLUGGED: A Survivor’s Story in Scenes & Songs is a musical performed by the Dayna Clay Project based on Paul’s critically acclaimed, small-press novel Unplugged. It’s a story that has been playing in Paul’s heart for a long time. “After the novel came out in ’02, I toured with it for a while, and then went on to other projects and other books,” McComas said. “But then, four years ago, it was sort of pulling at me and saying, ‘Hey, remember me? What about me?’ And I decided to listen.” And, thus, the Dayna Clay Project was born.

The book Unplugged chronicles the journey of 27-year-old rocker Dayna Clay — who perseveres when faced with depression, post-traumatic stress and suicidal thoughts in the wake of childhood trauma. The rocker’s age is important: 27, as in the age Kurt Cobain took his own life. Paul McComas stresses that this was no accident: “I did want to write about someone Kurt-like, who manages to step back from that brink.”

McComas also details another special person who inspired Unplugged — his first girlfriend Julia, who was a talented musician and actress. She was raped at age 20, and six months after, she took her own life. “It wasn’t until the late ’90s, when I started writing Unplugged, that I was consciously doing something in response, to let her story — Julia’s story — not end with her suicide,” McComas said. “To let the story continue in another form, by her serving as the inspiration for the story of another young, talented artist…who was able, in the wake of her own rape, to step back from the edge and live and grow and heal, and help others grow as well.”

McComas and Kuper both have their own experiences that make the message of Unplugged near and dear to their hearts. “I am a depression survivor — someone who struggles and lives with recurrent, episodic depression,” McComas said. “And it’s important for me to say that on the record because the more people who say it on the record, the more people reading this article or going to one of our shows and hearing me say it there, the more likely they are to go out and get help.” Kuper says she has lost a friend to suicide. She believes Unplugged is important because “everyone that you know is either affected by, or knows someone who is affected by a mental health issue — and that could be an eating disorder, or anxiety and depression, or it could be an addiction issue. It could be bipolar disorder, it could be something undiagnosed…but everybody knows somebody.”

The cover of 15th Anniversary Edition of UNPLUGGED, featuring Maya on the cover.

It’s a big year for Unplugged: 2017 marks the 15th anniversary of its publication. In celebration, the novel’s publisher has come out with a special 15th Anniversary Edition of the book. McComas has made some changes, but its themes and message are still the same. The original 2002 version of Unplugged is a bit hard to find, since it is out of print. McComas and Kuper urge that the additional content in the 15th Anniversary Edition is something you don’t want to miss out on. “The older material continues to evolve and grow. Paul is not incredibly precious about his material, in that he understands that it’s a living, breathing thing,” Kuper said.

She elaborated with an example, about the spoken-word piece “Symmetry” that’s featured in the book and in the musical. “‘Symmetry’ is a piece that has changed over the years…the piece that is on the recording has been updated to include a broader view of what gender means, because the piece is about equality, and it’s about Dayna realizing that she is bisexual…and embracing her bisexuality because of what she sees in nature. She’s coming to see nature as a spiritual force.”

Included in the 15th Anniversary Edition of the book is sheet music for 12 Dayna Clay songs featured on the Unplugged soundtrack. Some songs have been around since the beginning, but others have been written in the past four years since the reboot of the project in 2013. These songs were brought to life on the soundtrack by Kuper and McComas, and released in October in digital and CD form (vinyl coming soon). The 15th Anniversary edition also adds 60 pages of Author’s Notes, including details about the creation of the book, the songs, and the overall project.

I had the privilege of seeing UNPLUGGED: A Survivor’s Story in Scenes & Songs for myself, on the the official release of the show’s soundtrack album and the Unplugged 15th Anniversary Edition book. It was a joy to witness the journey of Dayna Clay, and how she learned about herself in nature and in song. While Unplugged the novel is set in 2002, the musical is set in the present — and it was easy to see how the story has a timelessness about it. The musical and the soundtrack are companions to the novel — in fact, McComas has been performing live music during readings since 2002. “What I would do is either touch base with people I knew or through people I knew in the city I was going to, to find a female singer and a drummer, and I would bring my bass guitar out there, and I would send them three of the Dayna Clay songs — the first three that I wrote — ahead of time, and they would learn them. Then, we would get together [to practice] for 45 minutes — right before the gig, usually,” McComas said. “It was just an embryonic version of what we do now.”

“As fun as that was, and as ambitious as that was,” McComas adds, “we are taking it to some new levels now. There were albums before, but they were totally DIY, and it has evolved into this wonderful record from Chicago Acoustic Underground’s CAUDog Records — which is professionally engineered and mastered. I’m really proud of the songs — the ones that I wrote, and especially the ones that Maya and I co-wrote.”

The Dayna Clay Project does a great job of raising awareness through storytelling and song, but it also serves another purpose: to raise funds for the Rape, Abuse & Incest National Network (RAINN)’s National Sexual Assault Hotline and The Kennedy Forum. Half of the author’s royalties from the book and 100% of proceeds from downloads of the UNPLUGGED: A Survivor’s Story in Scenes & Songs soundtrack benefit RAINN and The Kennedy Forum.

Kuper and McComas have been working closely with RAINN while working on the Dayna Clay Project. In June, they visited RAINN’s headquarters. “It’s amazing, the breadth of the work they do with such a small office,” Kuper said proudly. She described how it never closes, and how, after initial contact, they immediately connect people with the closest rape crisis center to them, so they can get the one-on-one help they need. “Every $10 is a phone call that RAINN can answer. It can save lives — it can save multiple lives,” Kuper said. McComas (a member of RAINN’s National Leadership Council and its Speakers Bureau) and Kuper have met with RAINN co-founder Tori Amos three times to update her on their project: in Washington, D.C., in New York, and most recently after her October 27 Chicago concert. 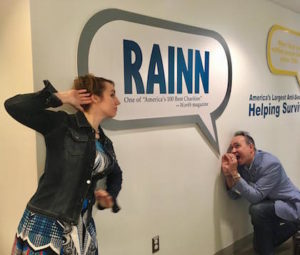 The Dayna Clay Project on their visit to RAINN in June 2017.

Maya and Paul had a photo opportunity with Tori Amos after her show in Chicago.

The Dayna Clay Project also works with Patrick J. Kennedy of The Kennedy Forum. Kennedy read Unplugged back when the novel first came out, and has even contributed a review blurb to the book. His journey from US Congressman to mental health activist is a fascinating one. He started The Kennedy Forum to eliminate the stigma around mental illness and enforce parity for behavioral healthcare. After the October 22 release of the 15th Anniversary Edition of Unplugged, things are a bit calmer for Kuper and McComas — but that doesn’t mean their work is over. They plan on doing more shows, and will continue to promote Unplugged. They both stress that the best way to help make changes in the world when it comes to sexual assault, rape, and the stigma surrounding mental illness is to keep the conversation alive. Whether you donate, volunteer, or even write a song about it, you are doing something to help.

Being a rocker with a cause isn’t easy, but it does help make the world a better place.