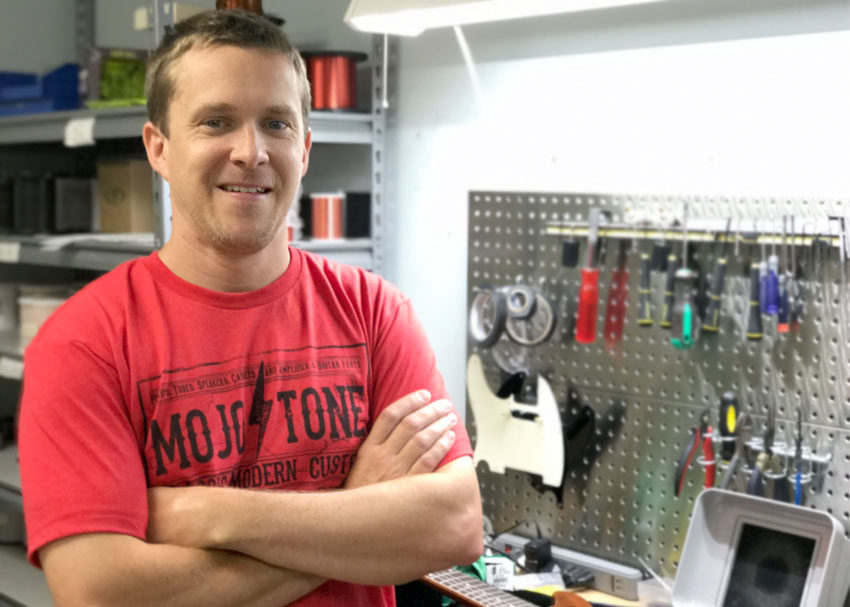 With a fascination for the playing techniques of Eddie Van Halen and an obsession with tinkering with guitars, David Shepherd was well on his way to a career in pickup design from an early age. Though he played in a few bands with friends in his native North Carolina, Shepherd said he wasn’t planning on becoming a rock star.

“I was more interested in building guitars and taking stuff apart and modifying it,” he said.

After high school, Shepherd took courses at the Roberto-Venn School of Luthiery in Phoenix, AZ, where he studied with and learned from a roster of accomplished luthiers. Upon graduating, he moved to Wilmington, NC where he worked in a local music shop doing warranty repair work for the likes of Fender, Martin and Taylor among others. After a few years at this shop, Shepherd got a call from Mojotone, who had recently moved from Winston-Salem to Burgaw, a small town about 20 miles north of Wilmington. They had called to offer him a job.

Winding Up a Pickup Line

At the time, Mojotone specialized in making replacement parts for pre-1980 amps, and making cabinets and speakers. What they wanted Shepherd to do was head up a new pickups division. Shepherd agreed and signed on in 2005. The early work included sourcing parts and building Mojotone’s inventory of parts and materials.

Shepherd began making one-off pickups for Mojotone clients and artists who requested them. Aptly named Custom Wound at the time, no two pickups were really alike, as Shepherd would customize each to the client’s needs and specifications. When he wasn’t making one-off pickups, Shepherd turned toward recreating the classics, like single-coil pickups inspired by ’50s Strats, and of course, the famed Patent-Applied-For (PAF) humbucker. 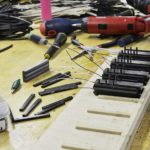 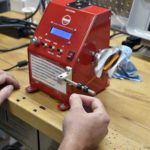 “The first thing that I kind of went outside-the-box on a little bit was doing a multiple-output pickup where I tapped a single-coil called a Convertible where you could go from a vintage output Strat to a thicker, higher-output
Strat pickup,” Shepherd said.

The Convertible proved to be a hit with players, and Mojotone was ready to grow its line.

“As we progressed and grew and refined our manufacturing techniques and learned, the whole business started to push forward as Mojotone pickups,” he said. 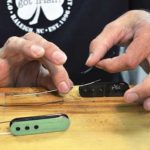 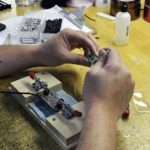 Installing a cover on a MojoTron

One of the most common requests Shepherd got at Mojotone was to make a line of hum-cancelling single-coil pickups. And for a few years, he resisted. He says he was never a fan of the quiet single coils available at the time — most sounded flat at the top end and lacked the dynamic, touch-sensitive response found on traditional single coils. But after enduring so many requests for them, Shepherd decided to take on the quiet single coils once and for all.

“The first thing I thought was ‘what makes a single coil sound so good?'” he explained.

Shepherd wanted to stay true to the tonal essence of a single coil, and he’d achieve that with simplicity. And the result he achieved was elegantly simple — 58 Quiet Coil pickups use less than 10 parts. His process, however was not so simple. After deciding on a prototype he liked, Shepherd would go on to tweak and test new components for over a year, getting far from his original design and eventually returning close to its original form, finally crafting quiet single-coil pickups he could be proud of.

Some of Shepherd’s other credits at Mojotone include tackling the holy grail PAF humbuckers with the 59 Clones. While some have tried to reverse-engineer original specimens to determine their components, Shepherd said this is a near-impossible feat, since Gibson workers at the time used components sourced from a number of places and the process wasn’t standardized at the time, so their tonal qualities varied greatly. What Shepherd went for instead was to be as historically accurate as possible, while committing to consistency.

“We contacted our injection molder and had the butyrate bobbins made; the butyrate plastic was what they used originally so that’s what we do for the 59s,” he explained. “The frames they’re built on are replicas of a ’59 frame. We look at how they were made but also we make them our own way and our big focus has always been on clarity, consistency and quality.”

When fellow North Carolinian Paul Waggoner of Between the Buried and Me wanted to develop a signature pickup, he approached Mojotone. Shepherd met with him, taking notes on what he did and didn’t like and crafting a pickup based on that input. The result was the PW Hornet, which can be found in Waggoner’s signature Ibanez PWM10 model. Waggoner recommended Mojotone to his bandmate, guitarist Dustie Waring, and soon enough, Shepherd was on the phone with him, talking shop over tonal qualities and preferences. Shepherd then sent over a set of DW Tomahawk prototypes to get Waring’s feedback.

“The first reply was ‘man these are really different from what I’m used to, let me spend some time with it and get back to you.’ A couple days later, he was like ‘don’t change anything, this is absolutely spot-on.'” Shepherd said.

One piece of advice Shepherd has for those looking to upgrade their pickups: don’t forget your pots, capacitors and switches.

“It’s like getting a new heart with a bunch of clogged arteries going to it; everything’s got to be good,” he explained. “If you have inexpensive or low quality components as part of your signal it’s gonna definitely affect the way it performs.”

Making a Name for Mojotone

Originally earning their reputation as a parts supplier for vintage amplifiers, Mojotone built its name on its hand-made cabinets and the ability to find rare parts and handle tricky repair jobs. Since moving to Burgaw, Mojotone has expanded its product range while adopting the town’s tight-knit feel.

“It’s a small town, everybody is super polite; it’s the south,” Shepherd said of Burgaw. “It’s a great place to be, to do business — just a real positive environment for Mojotone and for everybody who works here.”

But despite their small-town culture, Mojotone has worked with some big-name clients. From pickup re-winds for the likes of Keith Richards to custom orders for Billy Joe Armstrong and Geddy Lee, the amps, cabs and pickups made in Burgaw have been seen and heard on stages around the globe. Plus over the years, Mojotone has produced amplifiers and components for several other larger-name manufacturers. 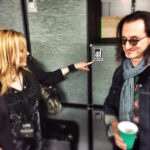 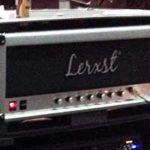 “That’s been our thing forever is just do stuff for a lot of these artists and other companies,” Shepherd said. “We’ve always kind of been the ghost in the business for years and years and since the past 4-5 years, we’ve tried to break out of that shell and get the Mojotone brand out there.”

Shepherd sees a busy future ahead in Burgaw. Soon, Mojotone will move into a new facility, located just down the street from its current one. Shepherd says its a walkable distance, but this new, 40,000 sq. ft. headquarters is give everyone at Mojotone much more room to create. 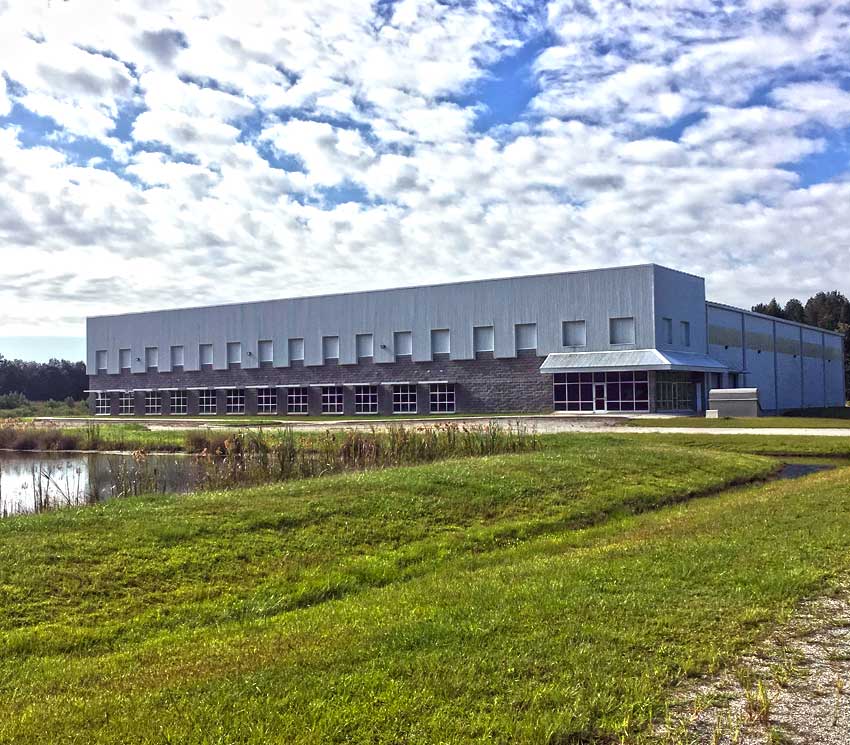 As Mojotone grows in size and influence, musicians — both amateurs and hall of famers — can look forward to more expertly built amps, cabinets and of course, pickups. Shepherd’s newest project — as was the case with Quiet Coils — has him making a product he’s never been happy with: acoustic soundhole pickups.

“They’ve always kind of sounded midrange and honky; like you’re inside of a can,” Shepherd said of soundhole pickups. “So that was the challenge; let’s make a soundhole pickup that really sounds good.”

Shepherd hopes to debut his latest creation at next year’s NAMM show. Until then, musicians will have to wait and see what else he and the Mojotone staff come up with.