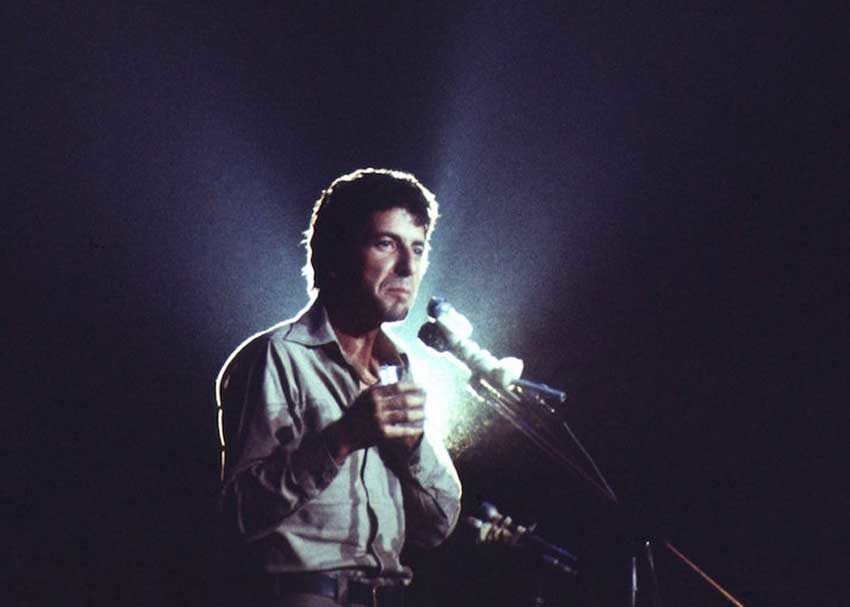 If we know anything about these times, it’s that sacrifices — whether earned or unearned — are coming. Leonard Cohen’s whole life was one moved by sacrifice. He was the first of his generation of Polish-Jewish immigrants to look for a better life in Quebec, Canada. Born into a middle-class family in 1934, his upbringing pointed to a decidedly different future than what would eventually turn out. Leading a safe life that should have ended with him running a profit at his dad’s clothing store wasn’t mean to be. The death of his father at the age of 9 presented Cohen with an opportunity he hadn’t planned for. In his father’s will, a young Leonard Cohen was bestowed a monetary trust that allowed him the freedom to pursue whatever intellectual and creative path he desired. Somehow, the winds of fate swept a young Leonard Cohen into the poetry of Federico Garcia Lorca, and the rest was history. As he travelled the back alleys and clubs of Montreal, life presented him all these opportunities that money solely couldn’t provide, and blank sheets held in the open, waiting. Writing and performing poetry, honing his craft to a spectacular edge, it was Cohen’s study of life and the way you portray all its gradients that would open all these other doors.

Whether out of sheer pragmatism or by discovering the true power of song in culture, Leonard realized that there was no stature or money to be made in poetry. Struggling to make ends meet as a writer and to have a voice in a vastly accelerating culture, Leonard initially dipped his toes in the music world by licensing his songs, songs like “Suzanne” and “Dress Rehearsal Rag,” for others like Judy Collins to popularize and make popular. Then came the realization that he himself probably should take the next step and cut the middle man. Initially traveling to Nashville to make his career as a Country-Western man, Leonard realized this still wasn’t it. New York City was where it was at, whatever it was. Naturally reserved, and distinctly out of step with its prevailing folk scene, Leonard reluctantly pushed himself into a career in this music world.

Maybe stints in New York City hearing singers like Nico that took a part in Andy Warhol’s Plastic Inevitable, or in Europe hearing Chanson singers like Jacques Brel and Georges Brassens, prepared him subconsciously for whatever was coming. Somehow, Leonard found his voice on his monumental first release: Songs of Leonard Cohen (1967). In working with producer John Simon, who preferred intricate strings and horns over Leonard’s inclination toward sparse, solemn accompaniment, the two found a way to reconcile and produce an album that worked to Leonard’s strengths. Sophisticated, urbane, subversive, surreal, deep with human urges and fears, these were mature songs, sung in that iconic gravely baritone voice that sounded unlike anything on this side of the world. Somehow, Leonard’s flamenco-influenced, syncopated guitar playing worked perfectly with whatever he sang. String arrangements moved in ways that were graceful and timeless. If psychedelia was dating itself, Leonard had tapped into some eternal music. And somehow, it all started here.

As the cult popularity of Songs of Leonard Cohen segued to further explorations and success with Songs From A Room, and Songs of Love and Hate, Leonard himself kept subverting what we’d expect from a singer like him. Albums like New Skin for the Old Ceremony showed him toying with Nashville-influenced arrangements. Others like Death of Ladies’ Man, experimented with Phil Spector’s “Wall of Sound.” However, as long as it took Leonard to get to writing each album, each one had something in it unlike anything else out there. As Leonard repeated that whole cycle in a vastly modern way, from 1979’s Recent Songs — a return to his sparse beginnings now augmented with Eastern-influenced strings — to his successful electronic synth-pop explorations of Various Positions and I’m Your Man, a man who struggled through multiple bouts of depression and writer’s block had found success at the point in his life when he was struggling with the worst kind of bout.

When he found his peace through Zen Buddhism, Leonard Cohen did the unthinkable. He took a long retirement from his musical and writing career, dedicating himself to living the life of a Buddhist monk. Only in the past decade would his audience realize that apart from taking this long sabbatical, Cohen had been struggling to make ends meet after being defrauded by his long-time manager. As ends started to meet and Leonard came back to tour and release some of his best, current work, few knew how little time he had left on this earth. Only recently did the normally private Leonard Cohen reveal this information after the death of his longtime muse, Marianne Ihlen:

Leonard Cohen's recent letter to his dying muse, Marianne Ihlen, takes on a new poignancy with the sad news of his death. pic.twitter.com/dkRz8U4x3M

You see, Marianne was there when Leonard almost said goodbye to us forever: when he travelled to the Greek island of Hydra. Afraid, but in search of a new beginning, Leonard was retreating to the comforts of Greek life, whatever those may be. Out of nowhere, when he was resigning to that quotidian Greek life, he met the most beautiful woman he’d ever seen. A single mother, Marianne would accompany Leonard when he tried to get out of the deepest of creative funks. Struggling financially and spiritually, Leonard was aided by Marianne’s monetary and personal support.

She would be the one who would sing in the taverns to make ends meet, while Leonard stayed at home writing that poetry he desperately needed to get out of his headspace. When Leonard was just about lost, he’d look into her face, and give life to words he once felt lost. As Leonard grew into his fame back in the U.S., Marianne consistently remained that muse, tying him back to the beauty and wisdom hidden underneath his own dark shadow. And now, Leonard, ever the friend, closes this final chapter, for us, his fans. And that’s where we are today, of course. Notifying you about the loss of a tremendous and visionary poet, musician, and human being.

Although Cohen was steeped more in the country tradition, he was swept up when he heard Dylan’s “Bringing It All Back Home” and “Highway 61 Revisited.” One afternoon, years later, when the two had become friendly, Dylan called him in Los Angeles and said he wanted to show him a piece of property he’d bought. Dylan did the driving.

“One of his songs came on the radio,” Cohen recalled. “I think it was ‘Just Like a Woman’ or something like that. It came to the bridge of the song, and he said, ‘A lot of eighteen-wheelers crossed that bridge.’ Meaning it was a powerful bridge.”

Dylan went on driving. After a while, he told Cohen that a famous songwriter of the day had told him, “O.K., Bob, you’re Number 1, but I’m Number 2.”

Cohen smiled. “Then Dylan says to me, ‘As far as I’m concerned, Leonard, you’re Number 1. I’m Number Zero.’ Meaning, as I understood it at the time—and I was not ready to dispute it—that his work was beyond measure and my work was pretty good.”