Beginner DJs and experienced scratch artists alike, take note: Numark just dropped the PT01 Scratch, a new model in their PT01 lineup. Boasting a “Scratch Switch,” the PT01 Scratch lets you scratch 7″ records, and it’s powered by an AC adapter or six D batteries, so it can travel anywhere you go.

With its built-in speaker, the PT01 scratch lets you play your sets to the people, but if you’d rather perform for yourself, the headphone jack lets you do just that. And if you want the PT01 Scratch to be your home turntable, just plug it into your receiver via the RCA outputs. Though the turntable is meant to scratch 7″ vinyl on, you can play all vinyl formats on it.You can even record your set to a computer or transfer your vinyl connection via the device’s USB port. Oh, and one more thing: you can plug in your smartphone to the 1/8″ input, play songs through the built-in speaker and scratch along to the track! 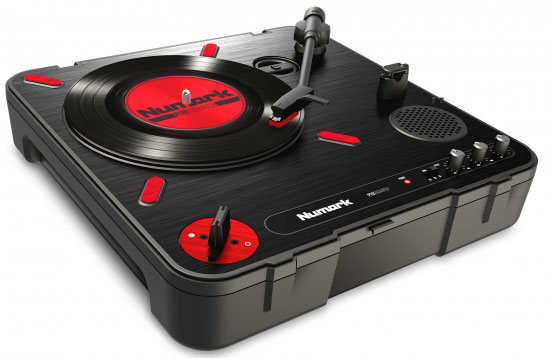 The PT01 Scratch includes a cartridge, slip mat and a carrying case, so all you need are some favorite records to get scratching on!