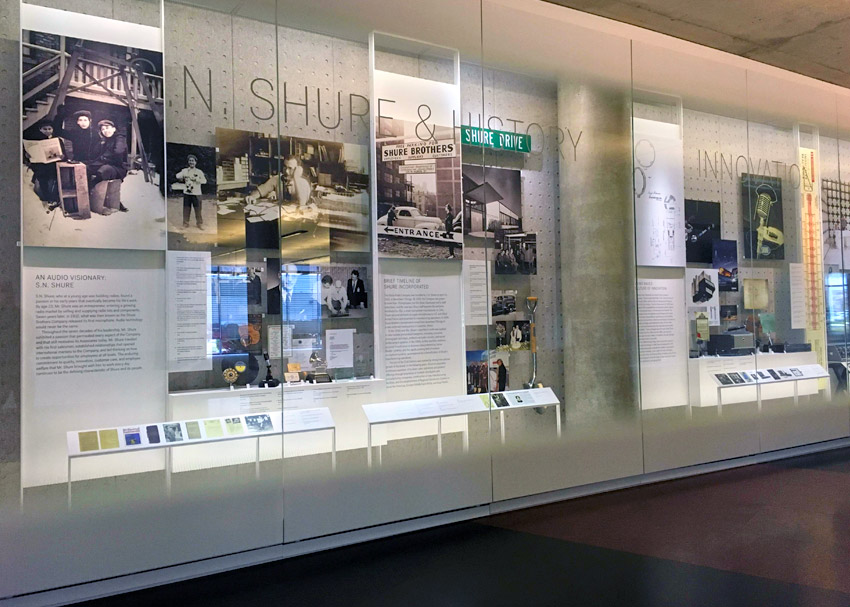 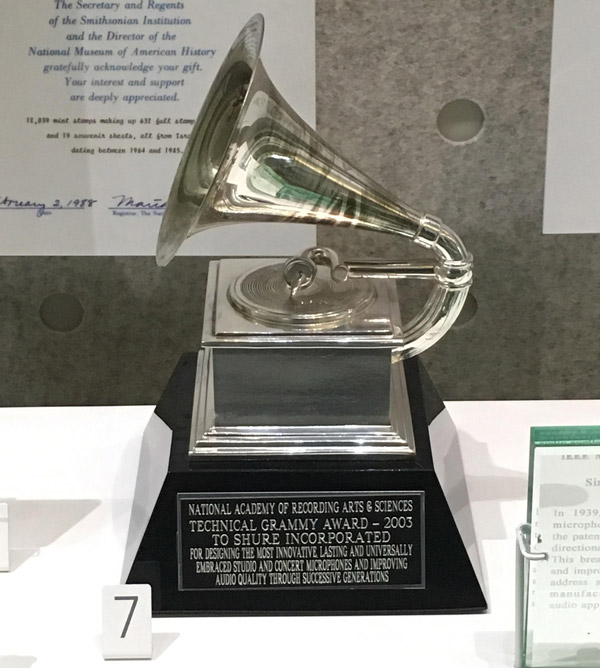 A Technical Grammy awarded to Shure for “designing the most innovative, lasting and universally embraced studio and concert microphones and improving audio quality through successive generations.”

Walk through the halls of Shure’s sleek and sophisticated building and you’re likely to hear someone talking about the company’s rich and renowned philosophy. Just as likely is someone crediting that philosophy to “Mr. Shure.”

I’m midway through a guided tour of The Great Hall, Shure’s new in-house museum exhibit, when I stop and remark to my guides, Mike Lohman (‎Associate Director, Content and Digital Marketing), and Mark Brunner (Senior Director of Global Brand Management), that the way Shure employees talk about the company’s founder, he sounds remarkably like a Rockefeller or a Carnegie, or even a Jobs or Zuckerberg – that is, the type of leader who not only makes their name into a synonym for the rare level of American entrepreneurial success they’ve achieved, but also one who seems full to the brim with the type of simple, practical, inspiring wisdom that changes an industry forever.

Mike and Mark are quick to agree. In fact, they were even more specific, telling me that aside from a few other names in the realm of musical instruments — names like Leo Fender, Les Paul and Sidney Harman – S.N. Shure stands peerless in his career in the audio and musical instrument industry.

The Great Hall, unveiled in January at Shure’s Niles, IL headquarters, serves as an exhibit of Shure’s history as a company, S.N. Shure’s life and devotion to his craft, and a larger-than-life reminder of the values and philosophy that he and his wife, Rose Shure, hoped to cultivate in each of their employees.

RELATED:
Nine Things You Might Not Know About Shure

I put “Mr. Shure” in quotes earlier because it stood out to me. I know plenty of successful professionals at plenty of respected companies, and none of them refer to their superiors at any level as “Mr.” or “Mrs.” Nor do I get the impression that anyone at Shure is required to do so. Instead, employees of the company refer to their founder as such out of a deep and long-standing respect. The same is true for his wife, the late Rose Shure. I learned on the tour that it was Mrs. Shure who championed The Great Hall’s conception and design.

The respect that Mr. and Mrs. Shure have earned from their colleagues and employees came from a lifetime of dedication and an unwavering devotion to not only holding themselves and their company to a high standard, but to creating a higher standard for everyone around them. Mike explains to me that The Great Hall and other spaces around the building display internally well-known S.N. Shure quotes.

“We are in the business to perform a service to people. ‘People’ includes our customers, our employees, our suppliers, and the communities in which we live.”

That’s the company’s mission statement, and it’s the tip of the iceberg when it comes to the wisdom handed down through the ranks at Shure. In fact, Mike explains to me on the tour that management at Shure is given something of an employee handbook upon promotion that’s absolutely packed with Mr. Shure’s pearls of wisdom.

He and Mark also explain along the tour that in addition to the exhibit covering Shure’s 90-year history, it also explores four themes the company exemplifies in all of its work. Here’s a look at those four themes.

Innovation resides at the heart of everything Shure has ever done. Starting out as a radio parts company (before radios were mass produced and one would have to build his/her own) to building the first wireless microphone and the first truly stereo phonograph cartridge. Later on, as compact discs and digital media annexed much of the market share vinyl albums had comfortably called home, Shure pioneered the next generation of wireless microphone technology, among many other things. 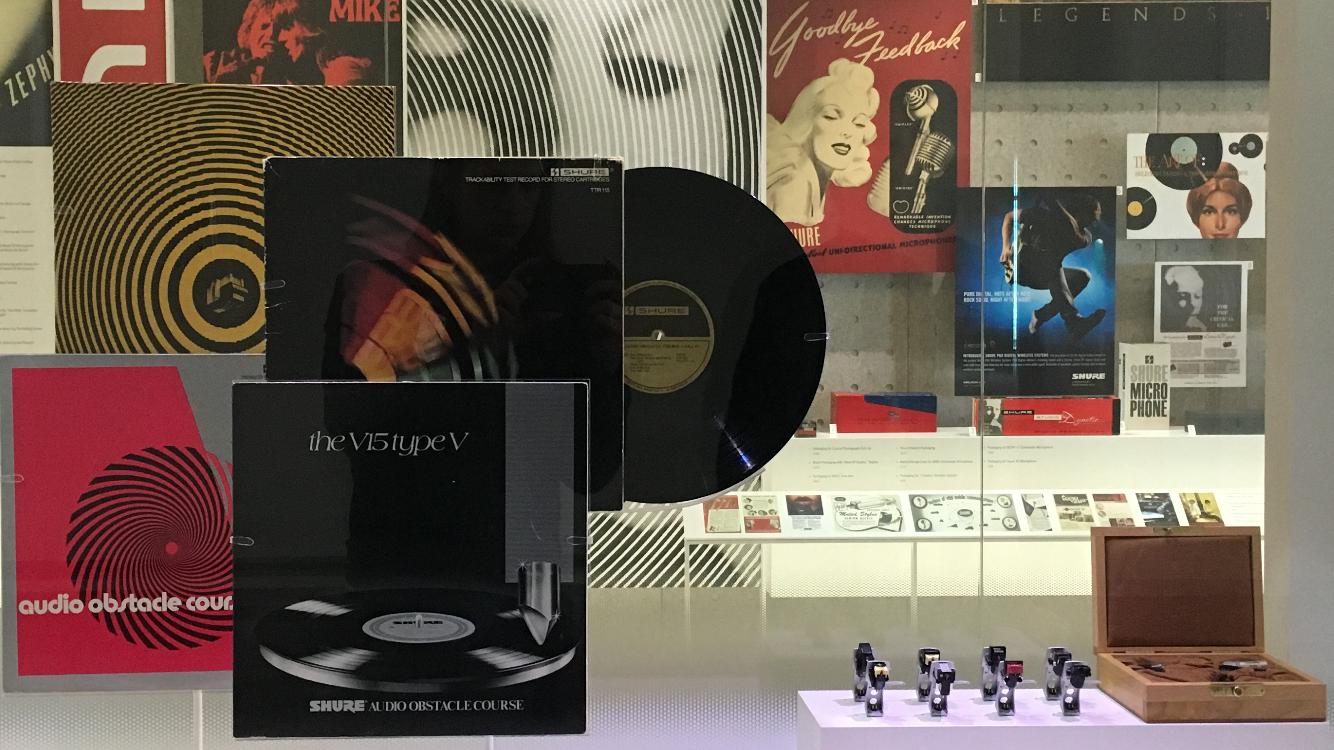 You may notice that the LPs pictured above are titled “Obstacle Courses.” If you’ve ever installed a home or car stereo, you might be familiar with those speaker test videos on YouTube; they’ll pan the sound left to right and fade back to front as well as testing super high and super low pitches. Consider the Shure obstacle course LPs to be their predecessors, only instead of purely testing frequency response and speaker function, these albums are designed to throw the stylus out of the groove. It was a problem years ago with turntable styluses that Shure aimed to nix. As a result, these LPs will produce some of the most horrible, obnoxious sounds you can’t even imagine in an attempt to toss the needle out of the groove, and as a result of this innovation, Shure was able to produce a balanced stylus that could take anything you could throw at it. 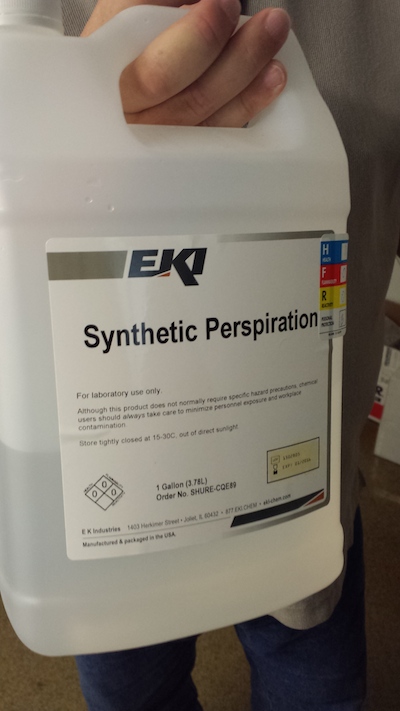 Cool? Maybe. Gross? If you smell it, yeah. Both? Debatable. Useful? Absolutely

If you’re familiar with microphones of any kind, you’re probably familiar with the Shure SM58. And if you’re familiar with the SM58, then you’ve probably seen one of the many tests performed where the mic is dropped off a building, run over by a car, fed to a dinosaur (you get the idea) and then plugged back in and used as if nothing ever happened. It doesn’t stop there. Testing under extreme temperatures and even moisture testing via synthetic human sweat ensures Shure products can and will endure anything you put them up against.

This started in the 1940s when the U.S. government contracted Shure to manufacture its communication devices. Microphones, radios and more had to be designed and built to a level far beyond what consumer electronics at the time experienced. The result included things like bomb-proof microphones. S.N. Shure not only rose his company to the challenge, but decided after the war ended that their superior quality control would continue, as it has to this day. And that’s why today, you’ll find dynamic microphones like the SM58 and SM57 that will handle any abuse you could imagine subjecting them to and wireless systems with impeccable transmission and reception, even in crowded urban areas. 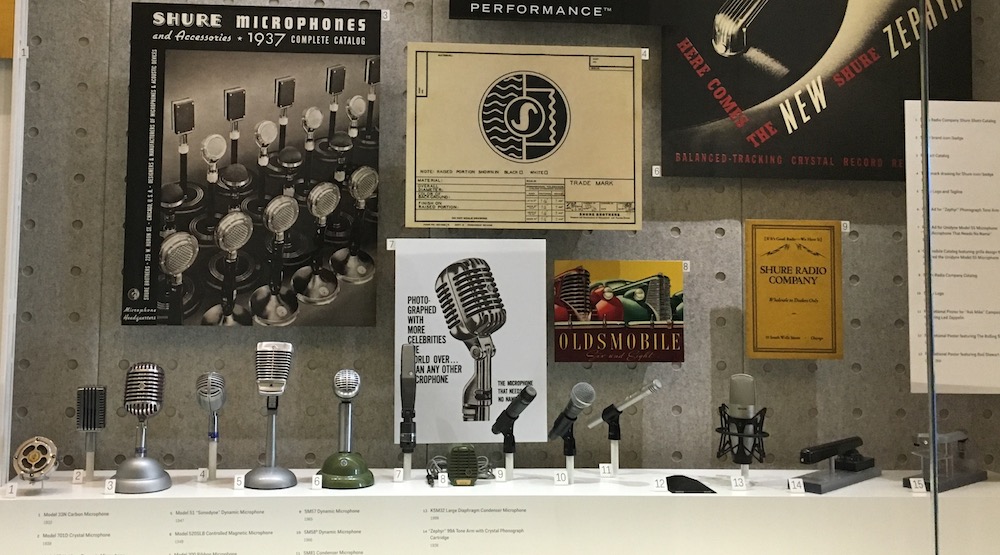 Shure’s history of microphone innovation. Note the empty slot at the right end — it’s meant to signify the next breakthrough is yet to come.

One thing I really love about Shure as a company is how proud the employees are of its rich history. When you take a look at the history of their products, it’s impossible not to see the influence that past products have had on the new ones, down to the logo (which is periodically updated). Take the “green bullet mic” (now the 520DX) or the Unidyne (now the 55SH) as examples — both have left gigantic footprints in the world of microphones and have influenced many of Shure’s contemporary designs, their own modern reissues included.

There’s a part of the tour in which a display of Shure’s most iconic designs and innovations are lined up in chronological order, with a blank space at the end of the line to symbolize that the company’s next great breakthrough still lies ahead. This strikes me in two ways. First by lining up Shure’s victories and giving me a snapshot of over 90 years of service to the musical community, and second by reminding us of the very beginning of both the Hall we’re standing in, where Innovation leads off the four themes, and of Shure itself, whose past, present, and future are all forged through innovation and whose accomplishments leave behind the trail of that unmistakable identity. 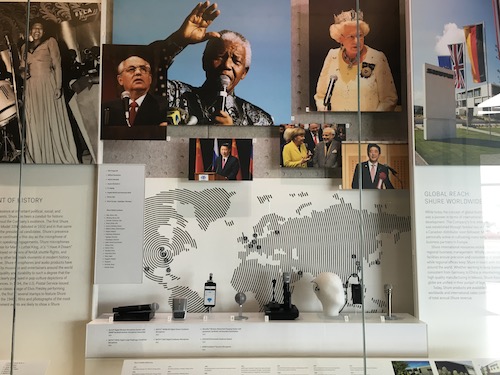 A look at some of the political and influential people who had used Shure microphones. 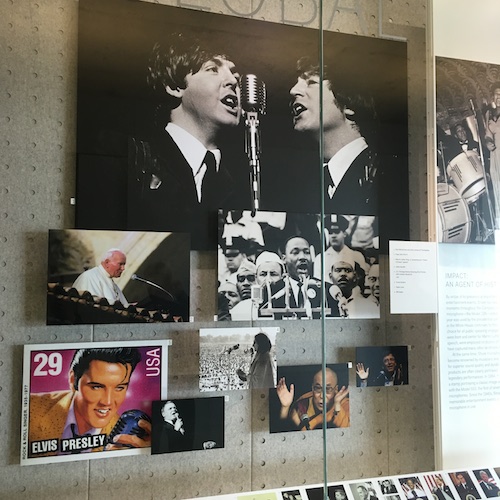 Some of the most famous figures of the 20th century used Shure microphones.

Near the end of the exhibit, Shure displays the part it’s played in helping deliver some of the most important speeches and performances of the last half century – photos of U.S. presidents, Gandhi, Queen Elizabeth, Nelson Mandela, and others of The Beatles, Elvis and more – addressing their own citizens, fans, and the world over through Shure microphones. You may or may not know that every U.S. President since Franklin D. Roosevelt used a Shure microphone. Since the 1960s it has been the Shure SM57, be it at the State of the Union Address, the Rose Garden, or even abroad. It’s quite an endorsement to see your company’s products on what must seem like every stage in the world. It’s something else entirely when the most powerful and influential figures in the world want their voices heard through your product.

Shure contracted architectural firm Krueck+Sexton, as well as Pentagram, to design and curate the exhibit and Clune Construction for the actual build-out. Rose Shure oversaw the project, but by then, her health kept her from spending as much time on-site as she would have wished. Nonetheless, she was able to review the plans from home and ultimately signed off on every idea, completely satisfied by the portrayal of her company’s legacy. Unfortunately, Mrs. Shure passed away just before The Great Hall was unveiled. However, she was able to take a video tour from home in the days leading up to the exhibit’s opening.

“To give you an idea of how closely the dates fell, Mrs. Shure’s funeral was on a Wednesday and The Great Hall was unveiled that Friday, so it was — as you can imagine — an emotional week here at Shure,” Mike explained.

It goes far beyond saying that Mr. and Mrs. Shure would be proud today to see that the legacy they built will not only live on at Shure, but will continue on sewn into the fabric of the music and audio industry.