Even Thieves and the New New Wave 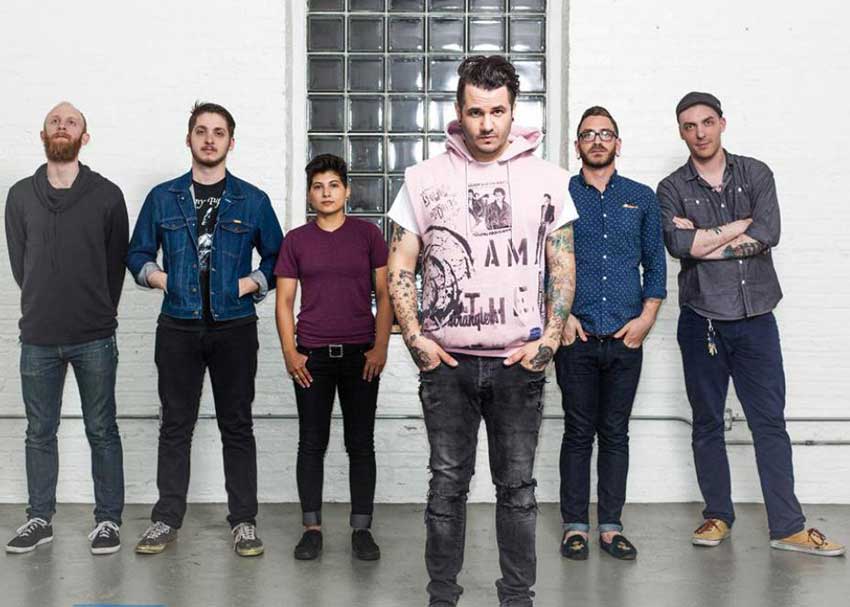 Before I listened to Even Thieves perform at their practice space in Chicago’s The Music Garage, the posters on the walls gave me plenty of insight into their influences: Morrissey’s charmingly smug grin, Interpol posing in sharp suits, a promo for an appearance by Duran Duran at a local Best Buy.

Even Thieves’ sound is equal parts the influence from their new wave heroes and current acts resuscitating the genre. Hearing them play, I picked up on some: there’s the fun glitz of The 1975, the harder edge of Queens of the Stone Age, and Interpol’s dark melancholia. The six-piece band, made up of vocalist Adrian Day, guitarists Vinny DePierro and Olivia “OJ” Garza, bassist Joe Chouinard, keyboardist Jeremy Atwood and drummer Tyler Leninger, reverently recreate the sounds of their heroes and add layers of danceable energy and arena-rock choruses.

Looking to try something new for their next gig, the band started off with an alternate intro for their song “Lost Days,” leading in with a blurred, building swell featuring layers of delay and trickling cymbals. Even Thieves are very conscious of stage presence, and really work to make themselves sound as massive as possible. The group formed about two years ago before settling on its current lineup last year. Some members know each other from previous bands: Jeremy and Tyler were together in a previous band called Lillyana Siren, and Adrian and Joe performed together in Silent Sirens.

“I know how to move around the stage with him already, so it was really easy,” Adrian said of performing with Joe.

And move around, he does. Despite the precious little square footage in the practice space, Adrian still skittered about like a man possessed, at one point even taking a leap off Tyler’s kick drum. 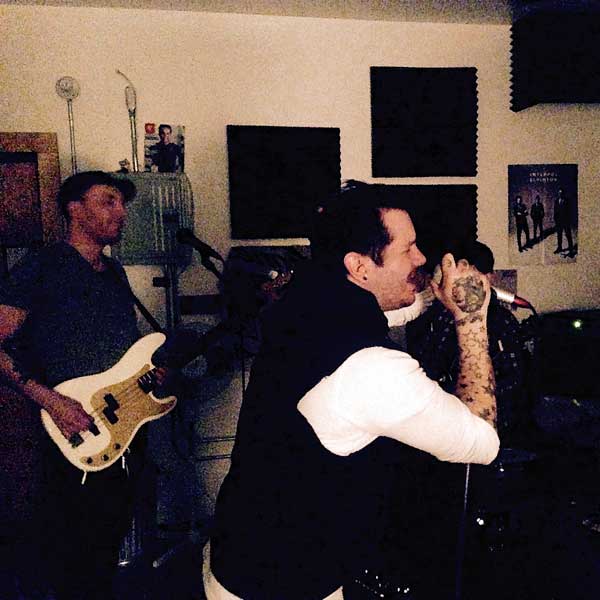 Adrian Day (right) makes the most of his limited space near bassist Joe Chouinard.

“We try to find a gritty, dance-y, melodic sound and draw from different places than most might expect for that,” Day said.

Day and Chouinard’s previous work in emo band Silent Sirens comes through in the band’s lyrics, tackling relationships gone wrong and the struggle of watching others lose themselves.

“At times, one or two of us drive the process a bit more, but the end result is one of collaboration. Most of our songs start rhythmically, with the drums and keys and then we fill in the rest as a unit,” Day said. 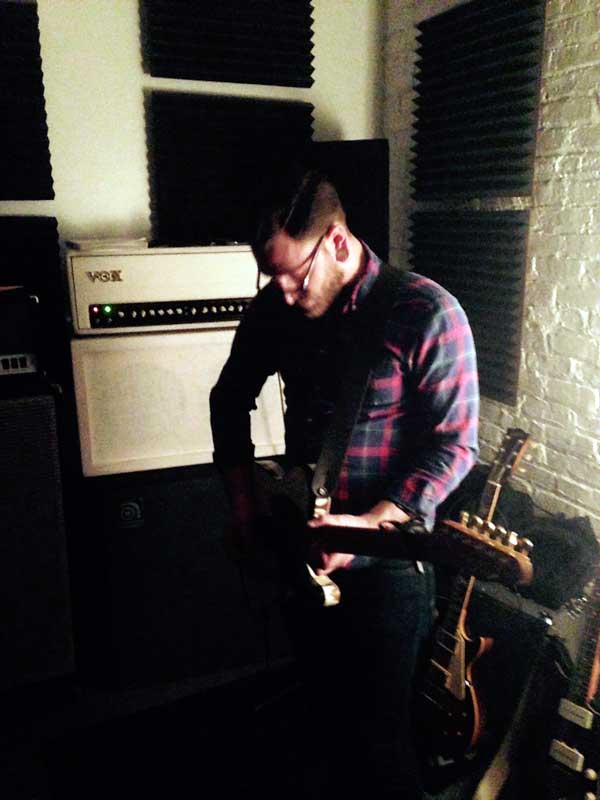 Vinny and OJ share guitar duties in Even Thieves, both adding delays and modulation to build the band’s aural spread. Vinny’s expansive pedalboard hosts pedals by boutique manufacturers like Mr. Black and also includes familiar standbys including a Boss Tremolo and Moog MF Drive. He wields various guitars for different sounds, including a Norlin-era Les Paul Standard and a Fender Telecaster he’s subjected to heavy modding, including handmade binding. OJ rocks a slew of guitars herself, including an Epiphone Les Paul Standard and Gretsch Electromatic. She plugs them in through a Line 6 POD HD500X into an Ampeg GVT52112.

“Also known as George,” she notes.

Joe holds down the low end on his Fender Deluxe P Bass Special, which combines P- and J-style pickups. That plugs into an Ampeg SVT3 Pro head connected to an Emperor cabinet — a duo with more than enough power to get him heard in the mix. His partner in rhythm, Tyler, plays a Yamaha Rock Tour kit with Paiste cymbals. His Roland SPD-SX is the key to triggering those classic 808 hits that pepper Even Thieves’ catalog.

Jeremy is the band’s keyboard player, and its time machine conductor. Manipulating his Yamaha MX49 keyboard and Waldorf Streichfett synth to create the kind of textures you hear in “Breakdown” — an intro that would feel at home on the soundtrack to a John Hughes movie.

Later in the practice, things slow down a bit, as the band begins a another song propelled by vintage drum machine samples. It’s got almost a hip-hop feel at first, but as the band comes in, the course shifts to early-’80s Phil Collins territory, bringing things back full circle. It’s a testament to the versatility of Even Thieves as a band, but also to the depth of the era they’re inspired by.

Perhaps the biggest moment of Even Thieves’ tenure so far came on January 9, when they performed with Nightmare of You at Chicago’s legendary Double Door club. The show was part of the Long Island emo-rockers’ 10th anniversary tour and was a bit of a surreal experience for Thieves guitarist Vinny.

“It’s funny to me; they’re from my hometown scene in New York,” he said. It was very nostalgic for me. I had their record when I was coming out of high school.”

The band is working on putting together an EP, and in the meantime, they continue to play regularly around Chicago.

“We’ve been working on a cover of a Killing Joke song called ‘Love Like Blood,’ and the chorus is “Till the fearless come and the act is done, a love like blood!” The song to me is about living your ideals; living your life to its fullest, chasing the fear of death away by living a full, meaningful life,” Day said. “My hope is that our music does the same for people.”

Moog Mother-32: Behind the DesignInterview: Victor Skamiera of Fero Lux Talks No Rest